Working in a bacterial lab, one soon develops a wider appreciation for these not-so-furry critters. There are ten times more bacterial cells living in and on your body, than your own cells. That means that if your body was a completely democratic organism, yourself would be the minority and you would be making bacterial-centric decisions. The kinds of activities that bacteria would likely vote for include never using soap, keeping a warm body temperature and spending most of the day wallowing in a sugar bath.

Working in a bacterial lab, one soon develops a wider appreciation for these not-so-furry critters. There are ten times more bacterial cells living in and on your body, than your own cells. That means that if your body was a completely democratic organism, yourself would be the minority and you would be making bacterial-centric decisions. The kinds of activities that bacteria would likely vote for include never using soap, keeping a warm body temperature and spending most of the day wallowing in a sugar bath. 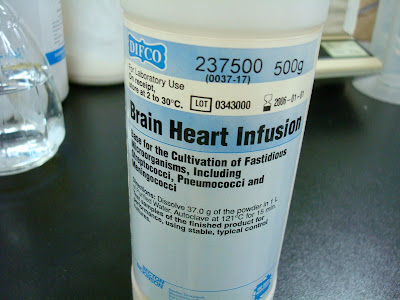 While many bacteria don’t mind what they eat, some of the more exotic bacterial species are quite picky. In the photo above is Brain Heart Infusion, a delicacy for some of our more opulent guests. It’s made from dried calf brains and heart, which is then blended into a powder. 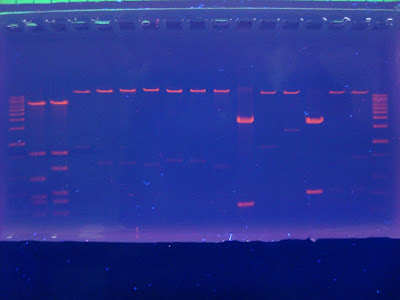 If you are a molecular biologist (or ‘molly-bolly’, as my old lecturer used to say), this is the kind of photo you see a lot of. It’s basically a slab of gelatine, with DNA loaded into little holes at the top. When you put electricity through the jelly, it moves the DNA. The individual DNA pieces will move more quickly or slowly, depending on how big the pieces of DNA are. So we can use this to figure out if we’re looking at exactly the same piece of DNA, or different pieces. This is important when you are trying to identify different genes.
With this particular photo, I was expecting most of the lanes to be identical or similar. But there are some different patterns in there, which warrants some brow furrowing and internet-based procrastination. That’s why I’m blogging now. 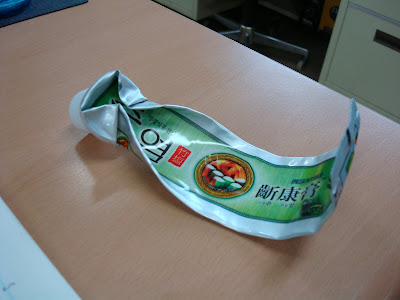 The living allowance for most Korean doctoral students is around $250 per week. It’s enough to get by, and a lot higher than what most of the world survives on. But it does force the development of a certain amount of frugality. The photo above is of the community toothpaste tube in the lab that everyone uses except me. They don’t throw it away until every last atom of paste is squeezed out. Quite admirable really. Although it gets to a point where I wonder whether the effort required to extract the remaining traces of paste uses more money in terms of calories than what it’s worth.

I use my own toothpaste because I don’t like the flavour of this one. The name of the flavour is ‘Bamboo Salt’, and it tastes just like it too. Salty toothpaste is common in Asia, and I have always been of the Minty Toothpaste persuasion. 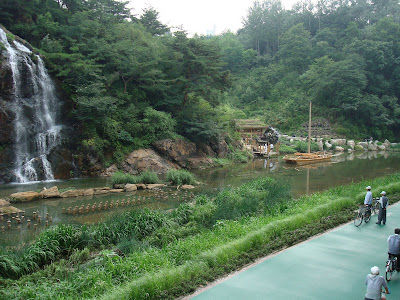 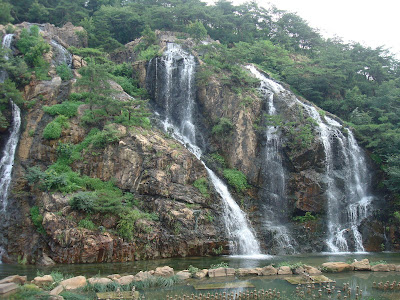 Heather’s uncle works at the same university as me, and we went to visit him at his house recently. Meeting Heather’s family always involves eating Korean food, listening to a lot of Gyeongsang dialect and later eating fruit and drinking tea.

Near her uncle’s house is this rather nice natural waterfall. Humans feel naturally comfortable around the sound of running water, partly because the primordial instinct to linger close to fresh water still lurks in the more ancient parts of our brain. 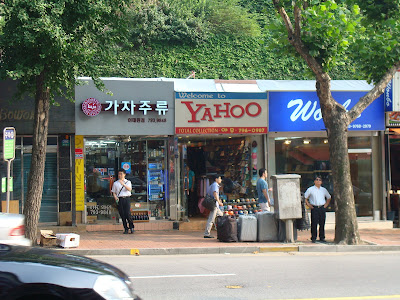 Then we went off to Itaewon. Copyright law in Korea has been strengthening recently, but a lot of trademarked names are openly used by other vendors. I don’t know where I stand on the idea of copyright yet. On the one hand, it’s a good way for customers to recognise quality merchandise, but on the other hand I do think that the idea of trademarking has gone a little too far these days.
Like this ‘Yahoo’ store that sells belts and ties, I often find myself walking into places called something like ‘The Hyundai Grocery Store’, and thinking “Something tells me this isn’t affiliated with Hyundai at all…” 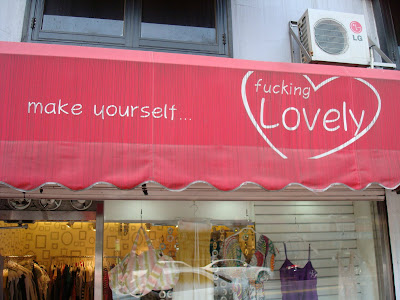 And then there are store names that no-one would be interested in copying. This is what happens if you ask an inebriated English teacher to name your shop. 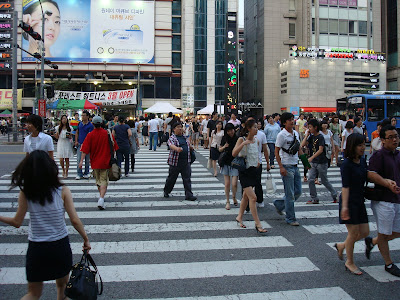 The streets of Gangnam are busy throughout the week. I’ve developed my list of hangout places in Seoul now. The first is Itaewon, then Gangnam and then Sincheon. I always like to have fun, but there’s also a lot of lab work to do. 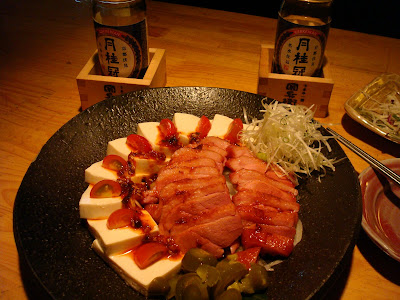 Heather and I went to a Japanese sake bar in one of the sidestreets. I like the fragrance of warm sake and I also like Japanese food a lot. In the photo above is some roast duck and tofu. It reminded me more of Chinese style cooking and was really good. Above the dish are two glasses of warm sake. 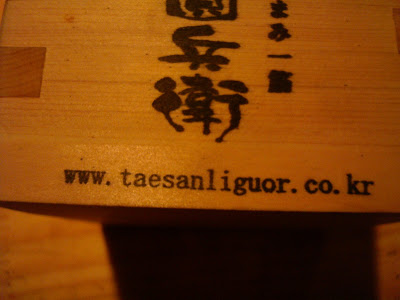 The wooden boxes that the sake glasses came in had this email address on them. I was explaining to Heather that the ‘g’ in ‘liguor’ is supposed to be a ‘q’, but it isn’t. Heather thinks it’s actually a ‘q’.

Most definitely not, say I. 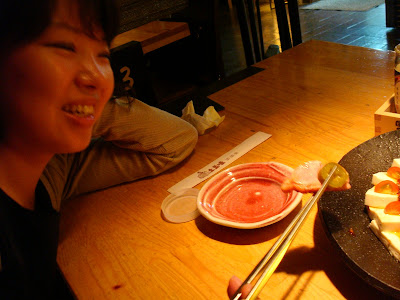 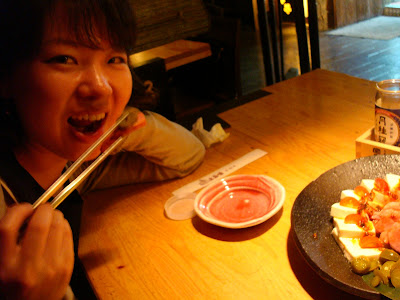 Heather’s personality is an interesting mixture of wisdom, humility, warmth and cheekiness. She’s good at convincing parents to enrol their students in English classes, but she also likes to tickle me when I’m resting.

The truth is, I’m not really ticklish. I just pretend to be ticklish to entertain her.

See how nice I am. 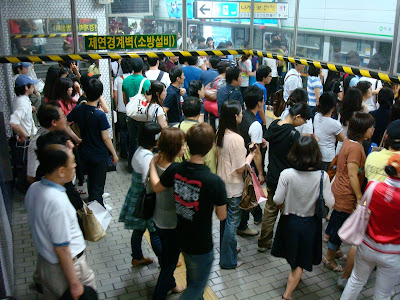 Sometimes the subway trains in Seoul get so full that if you’re the last to get in, your face gets pressed up against the window of the door. It’s always entertaining to watch and reminds me of my overflowing wardrobes when I was a teenager. Bondaeggi are baby silkworms that are a delicacy in Korea. You can even buy them in cans. I guess it’s kind of like canned baked beans. My dad would probably eat them on toast. They’re quite similar to the Witchetty Grubs of Australia.

They taste alright, but it’s hard to get the idea of eating a bug out of your head when you’re munching on them. 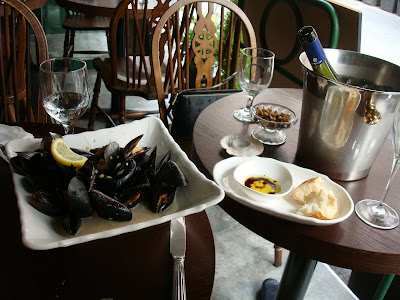 In the picture above is white wine and French style steamed mussels. Even though I don’t have money, I still have a strong affinity for finer foods. That means that I’ll often be eating something nice on the weekend, and then getting through the weekdays on more meagre rations. I often like to entertain the idea that eventually I’ll be able to eat this sort of food everyday.

But if I get to eat this kind of thing all the time, I’ll probably end up craving more simple foods.

Why we humans are so difficult to please, I know not. 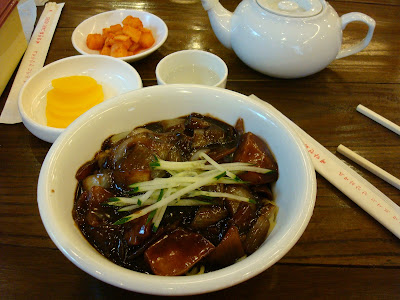 This is jjajjangmyeon, a Korean interpretation of Chinese food. It’s nice once in a while, but I end up eating it here a little too often. If you take only three dishes off the menus of Chinese restaurants in Korea: jjajjangmyeon, tangsuyook (sweet and sour pork) and jam-bbong (spicy soup), you’ll find that there’s not much else left. Korea is still rather naive in terms of foreign foods, and it’s one of the few negative aspects of living here. You have to search extensively just to find a place that can do good fried noodles. I’ve been here for nearly three years, and I still haven’t found one. 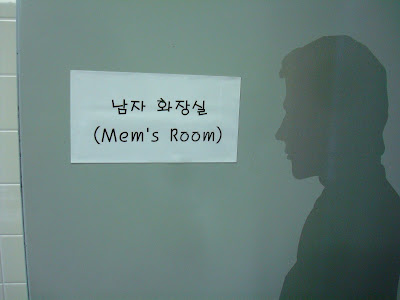 But what they lack in food variety, they make up for in spelling errors. Most of the toilets here say ‘Man’ and ‘Woman’, rather than ‘Men’ and ‘Women’, but I think this one was going for the more correct plural form. Although they could actually have meant ‘Meme’, which is a unit of memory. But that would still be missing the ‘e’ on the end.

Regardless of the intention, there were urinals inside. As Shakespeare once said “A rose by any other name, would smell as sweet.” 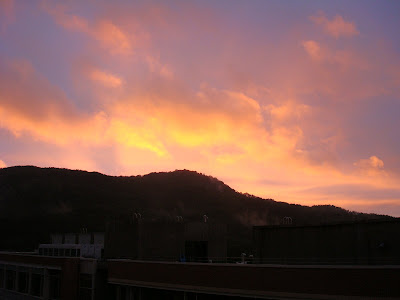 And taking us out today is this rather nice sunset seen from my laboratory window. Back when I was in the Scouts, we had a poem:

It’s a reference to the weather in the near future, although I’m not sure if it’s scientifically sound. Meteorologists are probably more trustworthy than poets, but then again meteorologists don’t give us useful phrases that are easy to recite.

That’s all from me this time. See you soon!