Well it’s a Monday and after this past weekend I really have to stop making “staying out all night, coming back at dawn” a thing. What was supposed to be a Saturday daytrip to Busan ended up being an all night meander through Haeundae, soju sippin’ at seaside, spicy seafood stew-eating shore side. What is sleep even, right?

Well it’s a Monday and after this past weekend I really have to stop making “staying out all night, coming back at dawn” a thing. What was supposed to be a Saturday daytrip to Busan ended up being an all night meander through Haeundae, soju sippin’ at seaside, spicy seafood stew-eating shore side. What is sleep even, right?

First stop in Busan was the famed Jalgachi fish market, a few subway stops from Haeundae. This one was much more expansive than the one in Haeundae, and there was so much to see it was hard not to get distracted. Splashing fish! Writhing eels! And…is that octopus actually trying to get away rn?! (Seriously, octopi just suction-cupping their way out of the buckets that they’re in and crossing the walkway! o__o Sorry little dude, but you’re a little too far from the ocean at this point to make a clean getaway.) At this market one of the things you can get is 회 (hweh) which is raw fish snatched out of the water, de-boned and jaggedly cut, perfect for making lettuce wraps with. Dipped it in some sweet spicy sauce and it was delicious! So good in fact that I didn’t bother instagramming the meal beforehand. Maybe next time you’ll get a picture. Maybe. 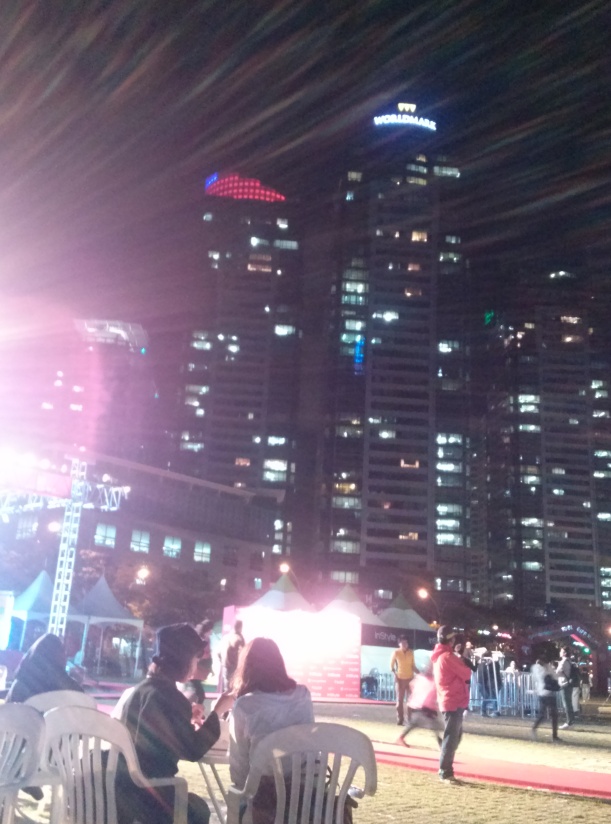 After eating some amazing seafood and browsing the oddities of the seafood market, we headed into the main event of the day. The reason I went to Busan was for the International Film Fest, an event that hosts directors and movies from around the world. I had never been to a film festival before but I know it’s a big “to do” when they’re around. I also hoped to catch a glimpse of TOP (my favorite KPOP star), a rapper who dabbles in acting. He was promoting his new movie coming out in November so I got to visit the little booth on the beach and get some promotional swag but no sign of him 🙁 The event’s outdoor areas featured a screen playing KPOP and various food stands with a mix of western and Korean food. Since I got ddeokbokki (spicy rice cakes, my fave) the stand owner gave me a whole other dish of various fried things – 서비스!! Service!! When you get things for free, little extras like a side dish, a pack of tissues, a cup of coffee at the bank, it’s called “service” and it is one cultural perk that I thoroughly enjoy 😀 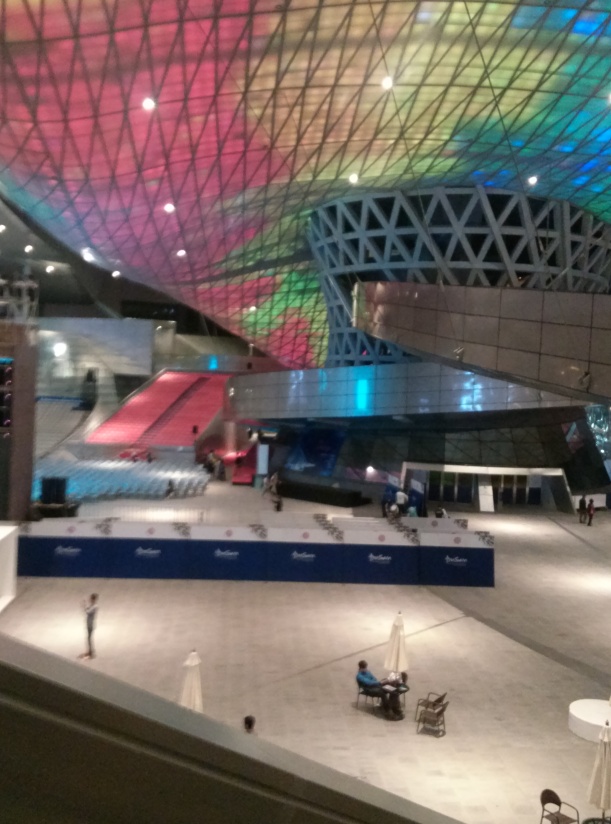 If you haven’t noticed it yet…well what’s wrong with you, Korea’s architecture is off the chain! This is the outside/inside space of the building that we viewed the movie at. The ceiling/overhang features lights that emulate a more colorful aurora borealis, seamlessly mixing sharp lines and organic forms, sheltered spaces and open air. Despite it’s mass, the building resembles a pile of delicately balanced feathers, fragile with a sense of intrinsic order.

At around 8pm we finally arrive at the theater. So what was the movie that you think we went all the way to Busan to see? A modern Korean thriller? Contemporary Iranian comedy? No – we watched a movie called “One-armed Swordsman” a throwback kung fu movie with all of the unintentional hilarity, awkward romance, and superhuman building jumps that define the genre. There is literally a scene where there is severed arm on the ground and a stolid conversation taking place. There’s an arm there, you know…you really haven’t noticed the arm yet?! 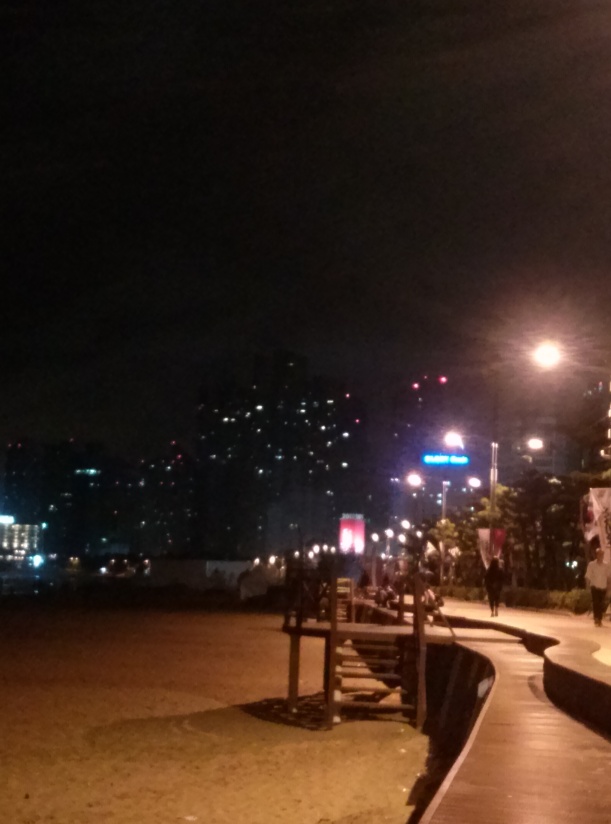 So after that wonderfully hilarious, quintessentially “kung fu” movie, we found ourselves at the impossibility of catching the last train at 11:00 pm. Instead, we got some soju and shared a few drinks at the seaside. I always love looking out into the ocean at night, where the horizon line is imperceptible, and all you can see is the infinite blackness of the sea and sky combined. We also had some nice weather despite the occasional mist. We went to several restaurants throughout the night as well, eating some spicy octopus stew, having some dranks, moving to another location, eating some 김치전 (kimchi pancakes, also my fave), drinking more dranks, stopping by a convenience store, dranks, I think you get the pattern here. Somehow we couldn’t find a 24-hr cafe anywhere, but by 4 something in the morning we didn’t expect much of anything to be open, really. There were restaurants still working into the wee hours of the night, but five meals into the day we were way too full to get anything else. We caught the 6am train out after that, and by the time I got back to my apartment it was around 10am.  Whew! Another 24+ hours of non-stop fun in Korea and I’m so glad that I spent it in Busan! Here’s to the next trip out sometime in the near future!