This year was the second time I spent the holiday season in Korea, and how I wish I had spent it in the Philippines instead. There’s nothing like Christmas in a country that celebrates the LONGEST Christmas (and New Year).

This year was the second time I spent the holiday season in Korea, and how I wish I had spent it in the Philippines instead. There’s nothing like Christmas in a country that celebrates the LONGEST Christmas (and New Year).

A few hours before Christmas Eve, I was still at work. I noticed that none of my colleagues were in a hurry to get home. It was Christmas Eve, but there were no Christmas lights flickering outside houses and buildings, no Christmas songs to be heard. The streets were quiet and dull. Malls closed early, as usual, so you wouldn’t see anyone rushing about to do last-minute Christmas shopping.

Earlier in class, I asked my students how they would celebrate Christmas, and it was a bit disappointing to hear answers such as: “I will play computer games; I will watch TV; I will sleep; I will do my homework; Nothing.” Another question I posed was, “Are you excited about Christmas?’ While most of the students answered, “Yes, I am” (or “Yes, I do” before I corrected them), there were but a few who said, “No, I’m not”. I wrote a sentence pattern on the board which read, “I’m excited about Christmas, because __________./ I’m not excited about Christmas, because __________.” Most of the answers were “because I will get a present; I will not go to school (It’s the beginning of winter vacation.); I will go to the amusement park/go shopping with Mom and Dad.” Those who said they’re not excited gave me either kunyang or ‘nothing special” for an answer. I couldn’t help but feel sad for my students who thought of Christmas as another ordinary day.

To get the children into the spirit of Christmas, I introduced Christmas vocabulary to them through a game. Some of the words were already familiar to them, and they could say them in English by looking at picture cards, but though they know the terms and their meanings, to them, they are JUST words… nothing special about a Christmas tree, a wreath, a candy cane, a star, the nativity, baby Jesus, Santa Claus, his elves, his reindeer, his sleigh.

I was told that Christmas in Korea is usually celebrated by young couples. On December 25th, Tuesday, I went to the bar where my husband works and most of their customers were indeed young couples. In fact, it didn’t seem like Christmas. It   looked like Valentine’s Day. My husband and I were even joking about motels being full that night. It’s not that Korean families don’t celebrate Christmas. Some do, especially families with children. Their celebration, however, is not as extravagant as our celebration in the Philippines or in majority of Western countries. In South Korea, family gatherings on Christmas Eve are not commonly held at homes. Most families prefer to eat out and go shopping with their kids on Christmas Day. Parents buy their children new clothes or new toys. Some grandparents give money to the little ones just like on Chuseok or Seollal (Thanksgiving Day or New Year in Korea). Amusement parks are also one of the favorite destinations. Instead of turkey, ham, eggnog or pie, Koreans have Christmas cake. Most of the customers who came to the bar on Christmas were bringing beautifully decorated Christmas cakes, which explains why there was no cake left for me to buy in Paris Baguette.

I was expecting heavy traffic on our way to Seoul on Christmas, but I was surprised that there weren’t a lot of cars. There were more cars on the way to the shopping center in Guri two days before the occasion. Families were doing their Christmas shopping a bit late, unlike in the Philippines where Christmas shopping begins as early as September. I don’t like spending the holiday season in Korea, but I like shopping here at this time of the year. There are a lot of brands on sale, and they are sold in unbelievably low prices. In fact, my husband, who detests shopping, bought more things than I did, including my present. He got me a pair of Daks leather gloves.

In the Philippines, I used to get tons of presents from family and friends, as well as from work, but in Korea, a simple gift from my husband will suffice. The truth is, it’s not really the gift that matters, but knowing that you are not forgotten on a special day. I love giving gifts on Christmas, though, more than I love getting them. Seeing my loved ones smile as they open their presents gives me so much joy. 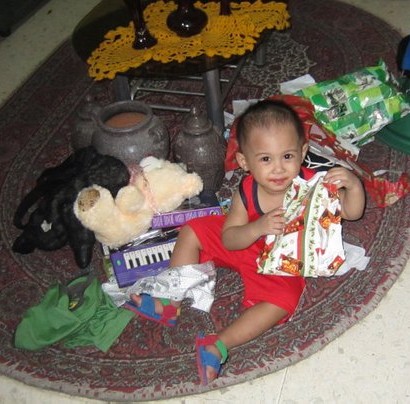 I was expecting a different Christmas this year, but my husband had to go to work on the 25th. We couldn’t do anything special together on Christmas Eve, but we exchanged greetings through text messaging, and as he always does, he called a few minutes before midnight. I spent my Christmas Eve in the room, watching movies on my computer, answering my husband’s messages and my Mom’s calls. Talking to Mom and the rest of the family back home made me more nostalgic, and then hubby sent another message saying it was a “White Christmas”. That sad song kept reverberating in my head as I was looking out the window, watching the snow fall.

I didn’t want to welcome any negative feelings on Christmas, so I kept myself busy watching Grimm and NCIS. (They’re better than movies.) I fixed a cup of my favorite milk tea and ate a Christmas-tree-shaped cookie.

Two years ago, after our wedding in Korea, my husband and I decided to go to the Philippines to spend Christmas there.  It was not his first Christmas in the Philippines, but it was his first time to celebrate it the Filipino way. He had been looking forward to it. We also invited his relatives, who came to the Philippines with us, to come to our house and celebrate with my family. They enjoyed the food Mom cooked and the children were excited when I handed them treats in a stocking. After dinner, the children had to leave, because they were tired and sleepy. We were told that they are not used to staying up until midnight even on Christmas Eve.

Some parents in Korea follow the tradition of stuffing their kids’ stockings with treats or putting presents under the Christmas tree for the children to open in the morning.

My husband told me that when he was a little boy, his parents used to prepare presents for him and his brothers on Christmas, but when they no longer believed in Santa Halabeoji (Santa Claus is called ‘Grandfather Santa’ in Korea.), their parents stopped giving them gifts. That ended their celebration of Christmas. Until they became adults, Christmas passed just like any other day.

When I asked my students what gifts they received on Christmas, I realized that money as a Christmas present is quite common in Korea, especially from elders. Some of them got toys, clothes, candies and chocolates. Some got none. I was wrong to ask everybody in class what presents they got. I should have thought about those children whose parents were either too busy or not thoughtful enough to prepare a little something for their kids on Christmas. Isn’t Christmas one of the most awaited time of the year for children around the world? It broke my heart to see the sad little faces of those who said they didn’t get anything or do anything special on Christmas. I tried to console them by giving them candies which are actually given to “Superstars” (most active students of the day), but candies can do very little to comfort a disappointed child.

One of my smartest students in class told me that he and his two “big sisters” were alone in the house on Christmas Eve, because his parents were working. Another student said she wished her Mom had not given her any gift. When I asked her what gift Mommy gave her, she said they are two Math workbooks, and Mom said she has to finish them in a month! How cruel can that be?

My husband said he used to be lonely on Christmas, when he wanted to go out with his friends, but they were all busy having dates with their girlfriends. He added that Christmas is “couple’s day” in Korea. Come on… there are too many couple’s days here, but only one Children’s Day and no Family Day at all? Christmas is for children, for families, for everybody, and it’s not supposed to be a typical day, it’s a day to be celebrated and shared and enjoyed, that’s why on the 25th, we say, “Merry Christmas!”.