Jewellery, owls, and toys don’t exactly have a lot of common, but one thing they all have is a museum of their own. Samcheong-dong (not far from the more popular Insa-dong) holds several specialized museums, along with several dozen art galleries and several dozen cafes and restaurants. Once you’ve arrived in the area, virtually everything is within walking distance of each other. 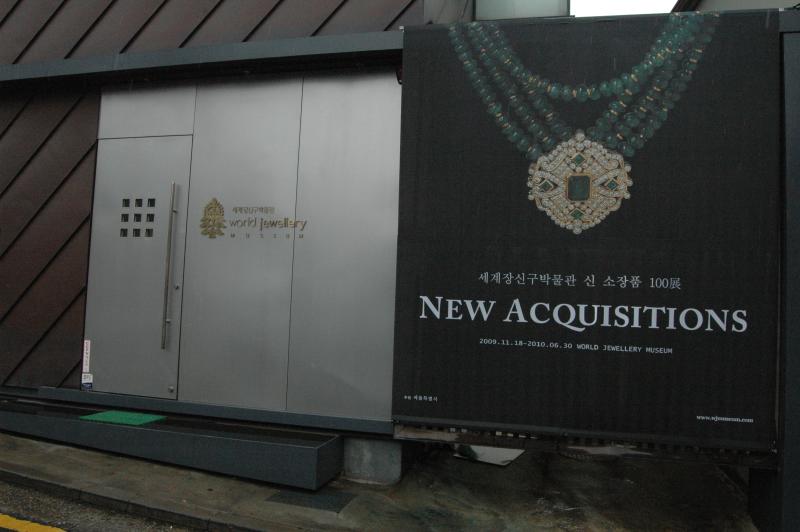 Jewellery, owls, and toys don’t exactly have a lot of common, but one thing they all have is a museum of their own. Samcheong-dong (not far from the more popular Insa-dong) holds several specialized museums, along with several dozen art galleries and several dozen cafes and restaurants. Once you’ve arrived in the area, virtually everything is within walking distance of each other.

The World Jewellery Museum (세계장신구 박물관 in Korean) was the first stop of the day. Originally founded by the wife of a diplomat who collected jewellery over 30 years of traveling the world, the exhibits come from several continents and span several centuries. Sorted roughly by type or era in tiny rooms, one of the first pieces that caught my eye was this bracelet: 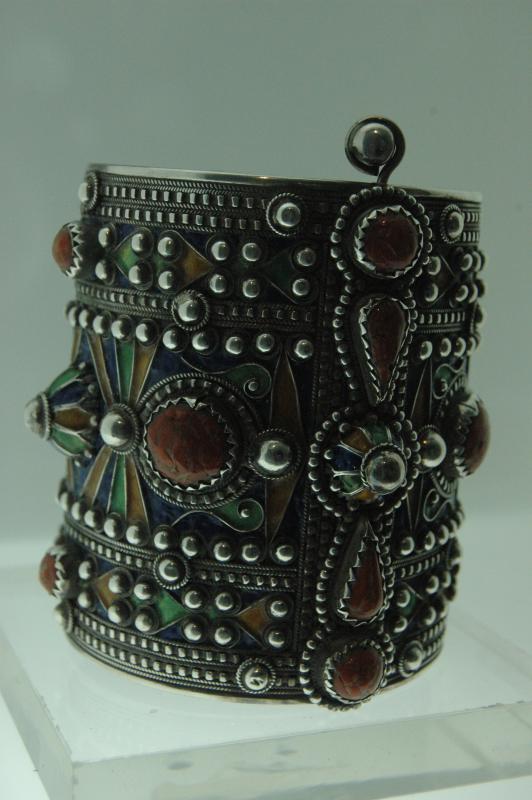 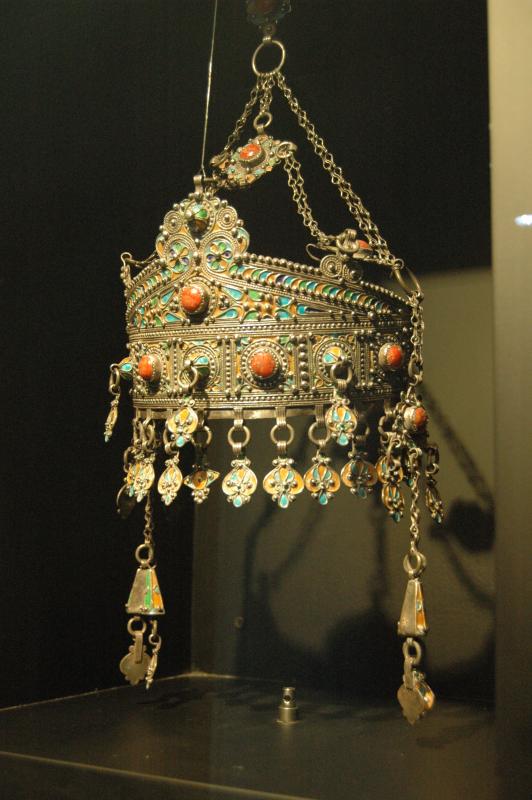 Imagine wearing this into your work one morning rather non-chalantly. This Moroccan Diadem hails from the 20th century, and presumably was worn as a sign of royalty. 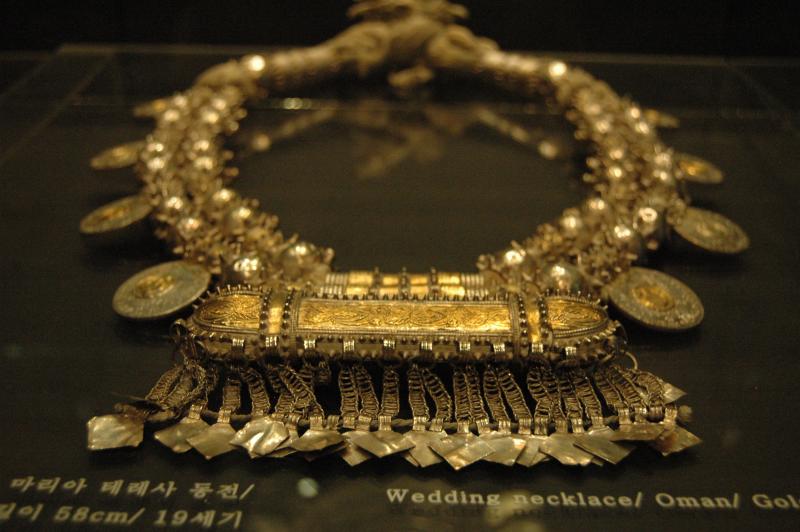 This gold and silver necklace from Oman was originally worn only on a woman’s wedding ceremony. It’s supposedly heavy – obviously they’re not going to let you pick it up to find out – and contained verses from the Koran for good luck. 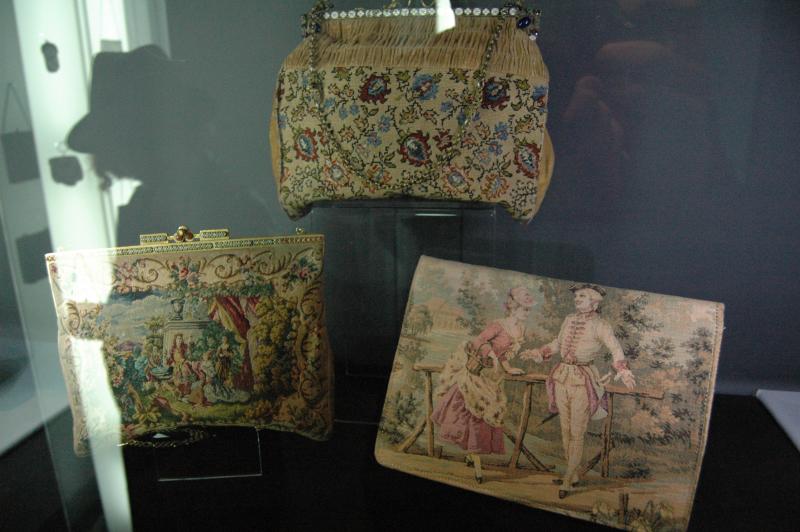 Strange – I hadn’t thought of purses as jewellery. Now on the second floor, these hail from 1930’s France as part of the Modern Jewellery display. Nearby, but not pictured, is a leopard skin purse from Botswana that would make a PETA member want to throw paint at the glass. 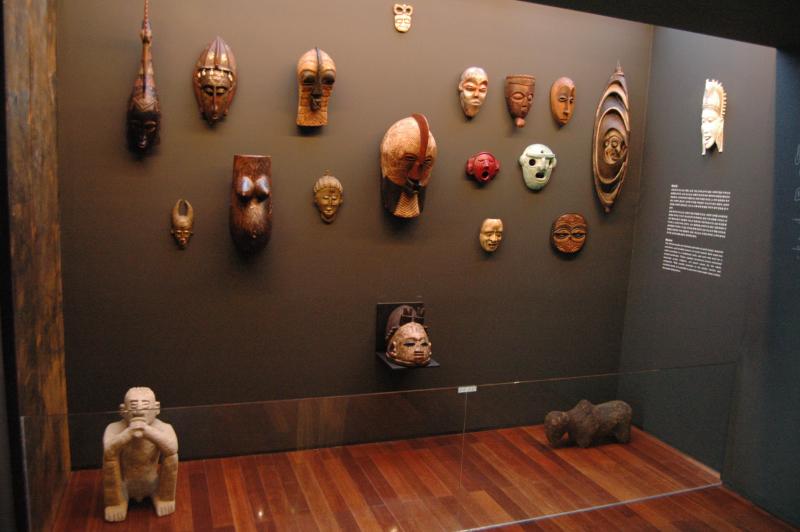 The same applies for this collection of masks from around the world. Each one is made according to a traditional style, worn by a trained performer, and filled with symbolism to the careful observer. 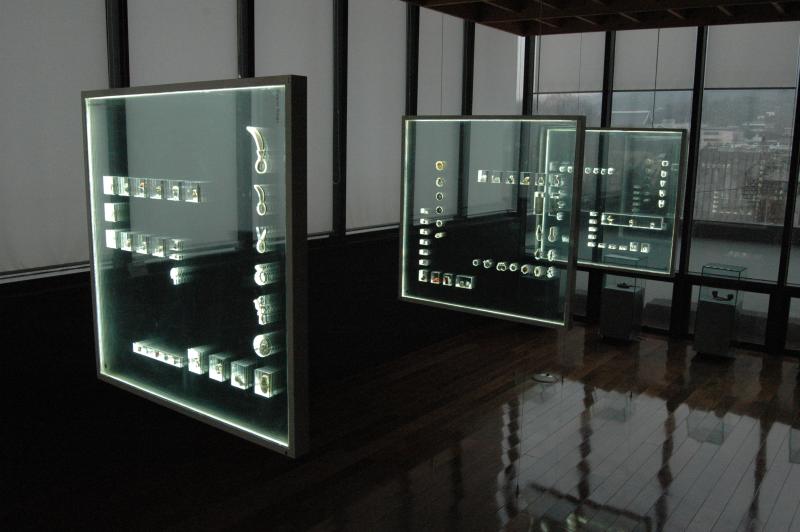 Onto the third floor, where a collection of dynamic rings await in the lit displays. Separated into power rings, love rings, magic rings and beauty rings, a small exhibit of hairpins round out the floor. Highly recommended viewing if you’re a history or jewelry lover, but skip the souvenir shop – if interested in purchasing jewelry with a story, there has got to be cheaper places to do so. 5,000 won admission, open Tuesday – Sunday (closed Monday) from 11am – 5:30pm. Visit www.wjmuseum.com for more information. 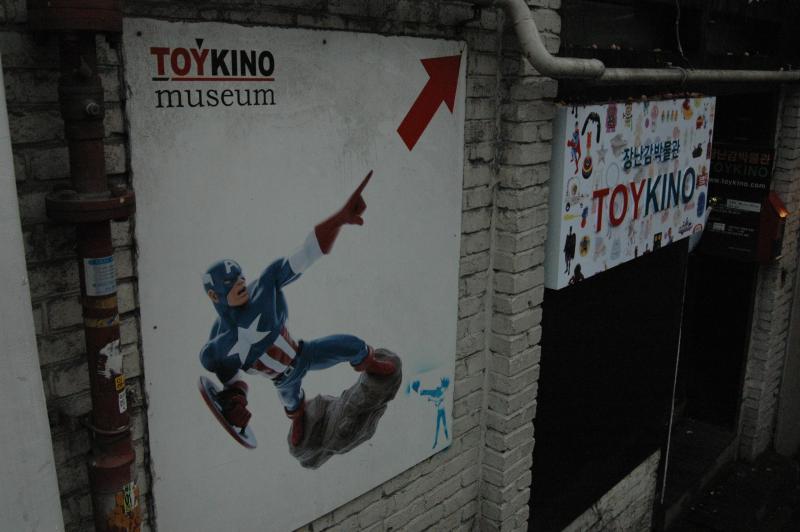 If the last stop made you feel more grown up or mature, Toykino Museum (토이키노 박물관) will bring you back to your childhood. With an impressive collection of toys and action figures in all shapes and sizes, you’ll be hard pressed to name them all. 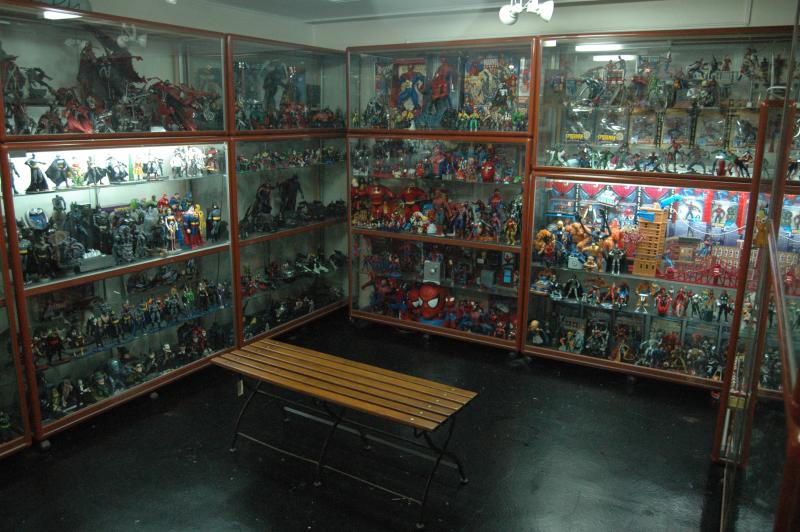 Theoretically organized into categories, the reality is that this small museum has outgrown it’s cramped location. The upside to that is that you can see several incarnations of the same character, created at different times. 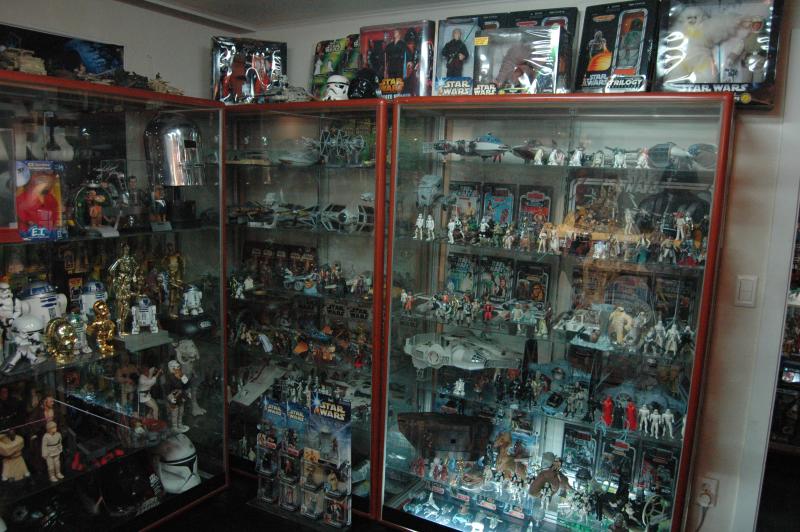 The Star Wars collection has definitely taken some time to put together. Although few exhibits are still in original packaging, they’re not much fun to look at that way. 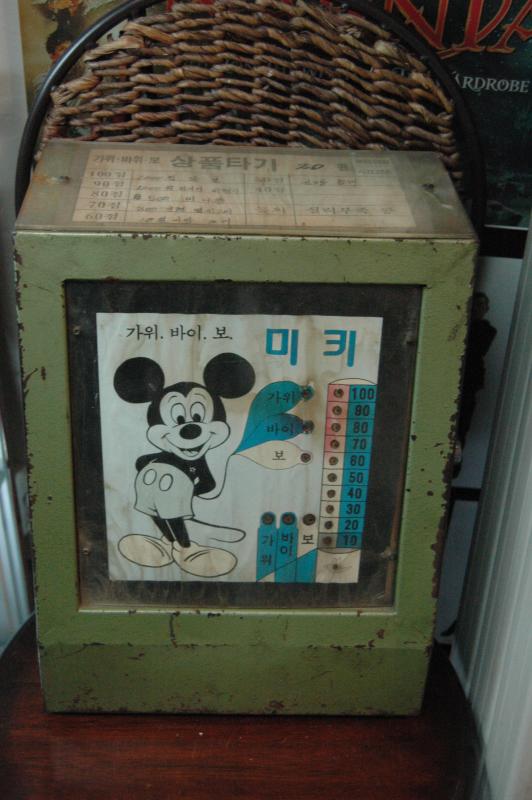 One of the only instances where you’ll see something other than American toys – anybody want to play Rock / Paper / Scissors with Mickey? Although no longer in working condition, it’s an excellent reminder of how much influence American entertainment has had in Korean culture.

With life-size exhibits of Spiderman, Darth Vader, and Batman, it’s hard to resist a photo op. Highly recommended if you’re looking to relive your misspent youth or want to quiz your significant other on how many characters you can remember or name. If you get stuck, the museum doesn’t have a lot of labels to help out – perhaps another museum-goer can help you out. 3,000 won admission; 2,000 won if you’re under 17. Open Tuesday – Sunday from 1pm – 6:30pm (closed Mondays). 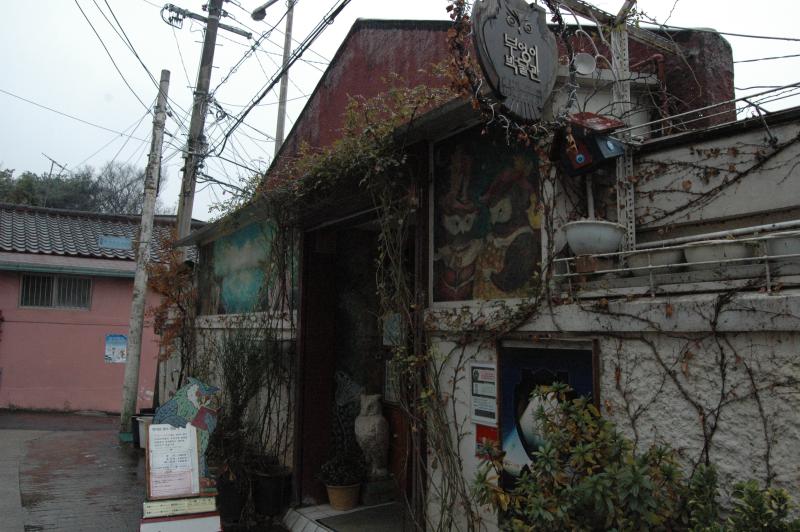 If you guessed this was a museum from the outside, you win the kitty. The overgrown ivy adds a certain ambiance to the neighborhood, and makes the Owl Museum (부엉이 박물관) a little easier to find. 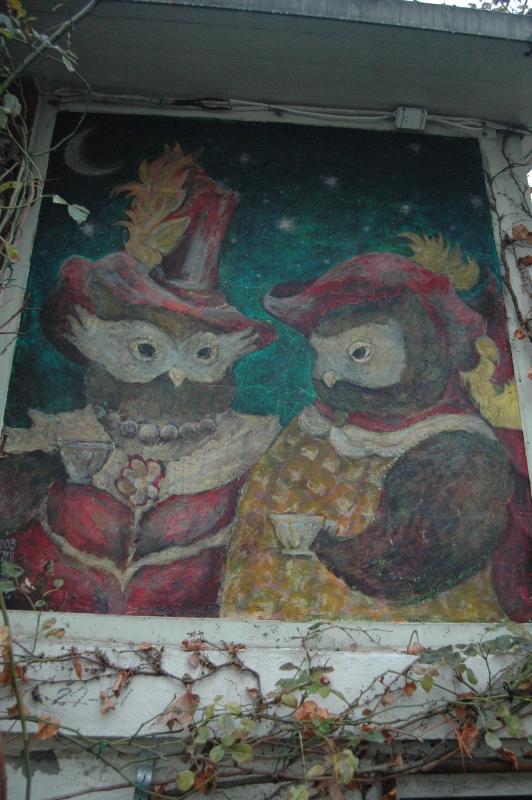 Unfortunately, no pictures are allowed inside – meaning you’ll have to see this private residence museum for yourself. You wont see any actual owls inside, but thousands of owl-related paraphernalia items is yours for the viewing. Just a short list: paintings, sculptures, origami, lights, stamps, wind chimes, clocks, coffee cups, towels, mobiles, foreign currency, stuffed toys, cookie jars, pencil cups, coasters, phone cards, books, lanterns, Hooters-related displays, kites, pillows, and much more. With 80 nations represented and over 2,000 items crammed into a one-room building about the size of an apartment, you’ll have to look closely to see it all. 5,000 won admission (includes a complimentary coffee or tea); open Thursday – Sunday from 10am – 7pm (10am – 6pm from October to March). See www.owlmuseum.co.kr for more information

If you’re in the area and these three weren’t enough for you, check out the Seoul Museum of Chicken Art, the Bukchon Museum, and the Silkroad Museum – all within walking distance of the three mentioned above. Stop anywhere along the way for a bite to eat, a coffee to drink, or a few pieces of art to admire – they’re all around the area.