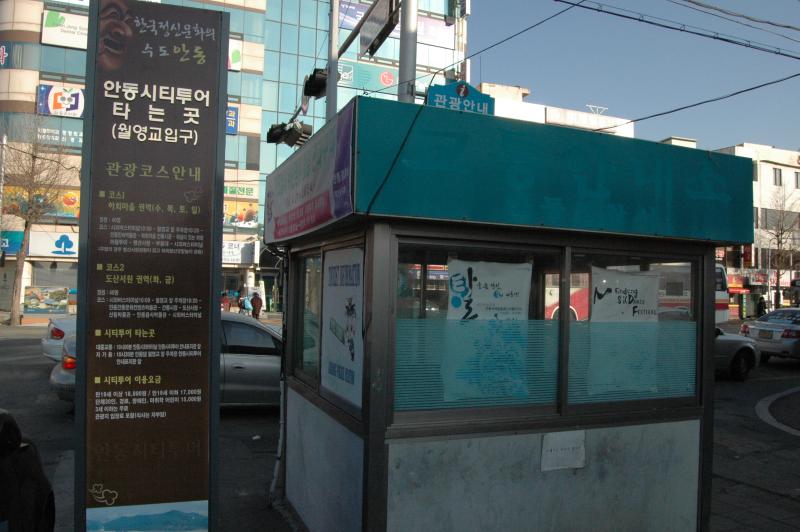 A day in most smaller Korean cities can be spent exploring by yourself or joining a group city tour. With only a day in Andong, and a desire to see as much as possible, I opted for the city tour. The tour leaves at 10am from the Andong bus terminal, which is just a kilometer or so from the train station. Only one tour a day is offered, and will be one of two possible tours based on the day (explained later).

A day in most smaller Korean cities can be spent exploring by yourself or joining a group city tour. With only a day in Andong, and a desire to see as much as possible, I opted for the city tour. The tour leaves at 10am from the Andong bus terminal, which is just a kilometer or so from the train station. Only one tour a day is offered, and will be one of two possible tours based on the day (explained later). 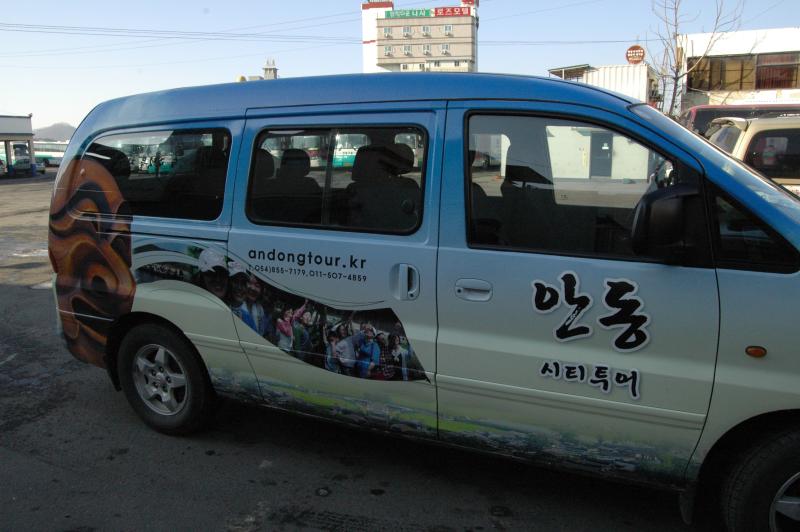 Welcome to Andong – population 185,000; home to several Korean cultural and folk traditions, including wooden masks, Andong soju (45% alcohol, yet supposedly doesn’t give you a hangover), and a papermaking factory.

Our fearless leader drove up with this van – and waved us in. His English skills were pretty slim, making me believe he escorts far more domestic than foreign tourists. 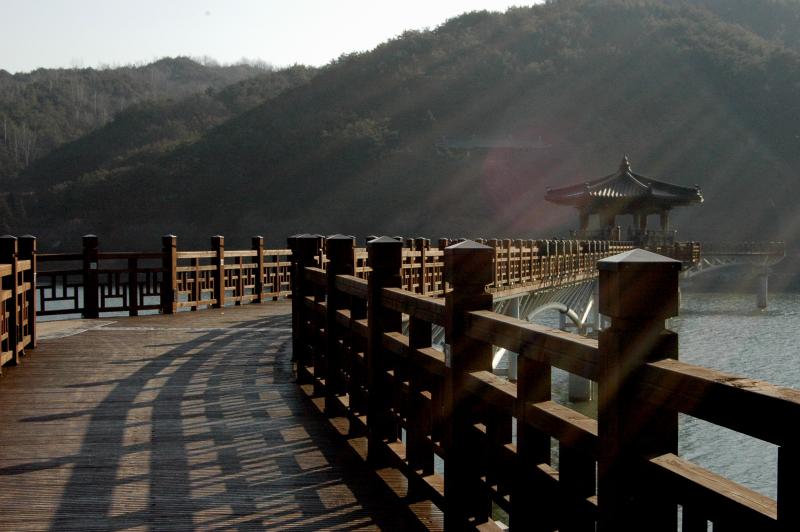 Our first stop is 월영교 (Weolyeonggyo) – also known the Moonlight Bridge. Coming during the day means the moonlight is a little hard to spot. Its claim to fame is length – at 387 meters long, it’s the nation’s longest walking bridge. It’s also made entirely of pine – some interesting trivia for those trivia buffs out there. 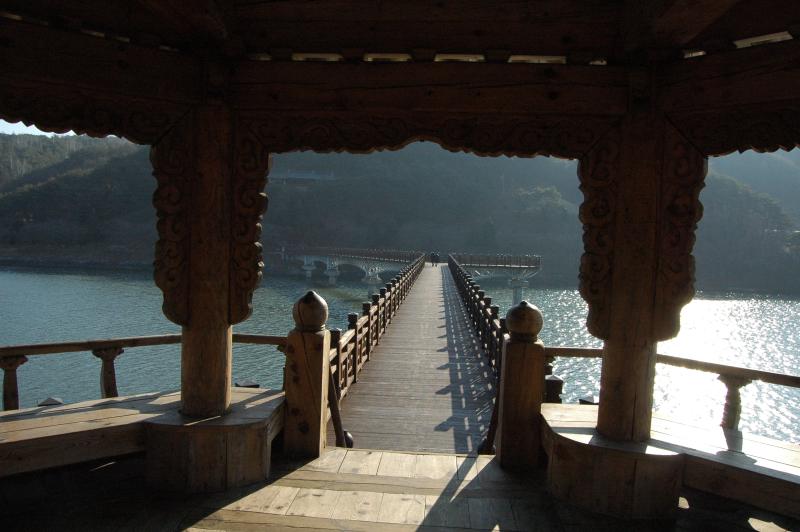 A pavilion in the center of the river gives you a rest while crossing, if you need it.

We were the only people on the tour leaving from the bus terminal, but we caught up with several Koreans after seeing the bridge. Our next stop – a seven-storied brick pagoda: 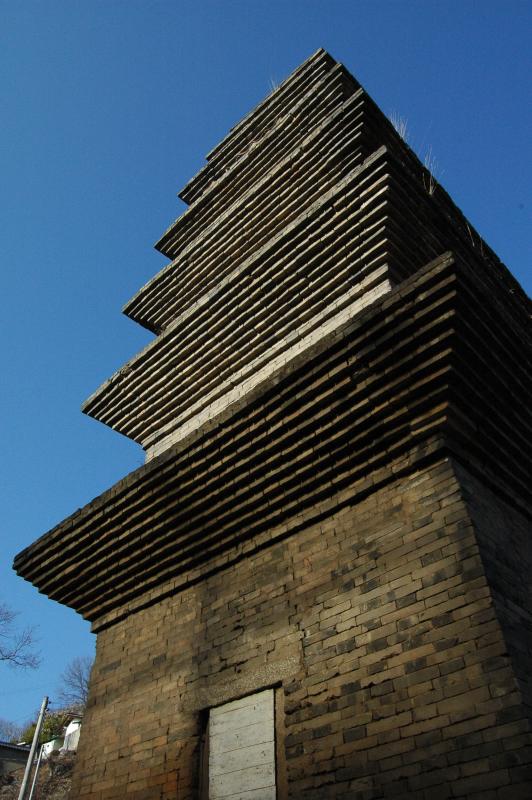 It’s National Treasure #16 and the oldest brick pagoda in Korea. According to the nearby sign, tiles used to be laid on the roof, indicating a wooden pagoda used to exist in the same spot. The pagoda was repaired in 1487, when a portion of Beopheungsa (Beopheung Temple) remained nearby. 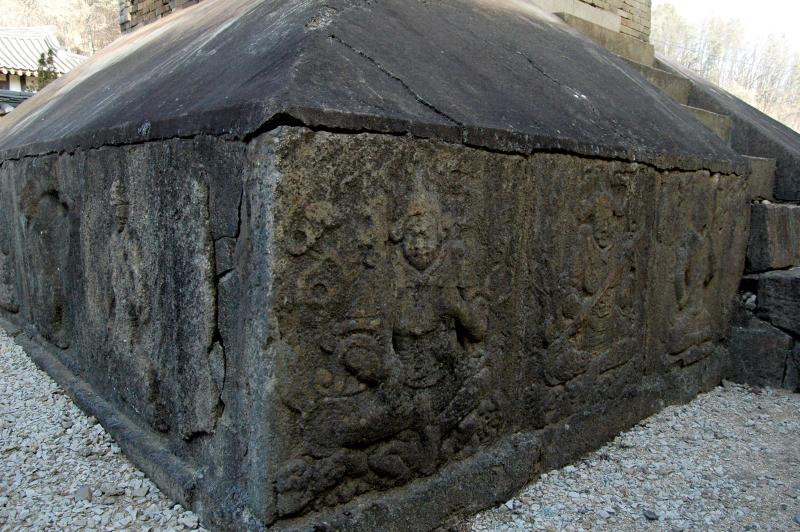 One of the corners of the pagoda’s base, showing the Devas and Deva Kings. 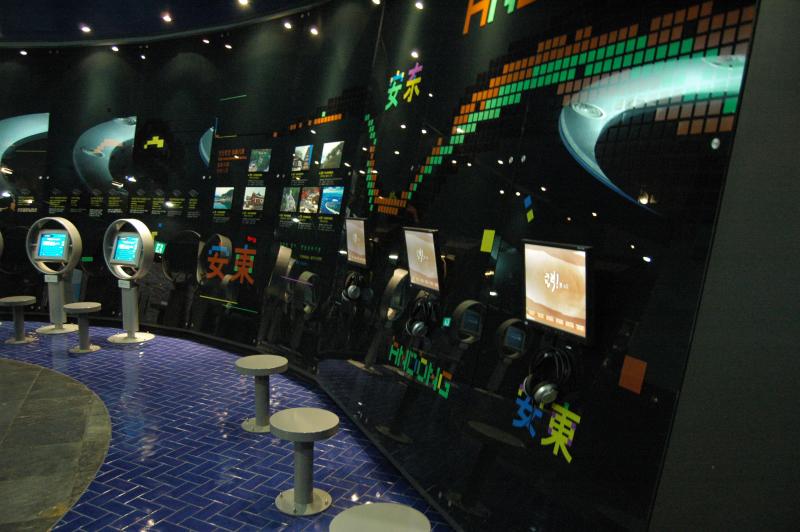 Going from a historical site to one of the most high-tech museums I’ve ever seen. Start by registering an RFID card with your name, preferred language, and e-mail address on one of the touchscreen computers – you’ll use this card to try out the various exhibits. 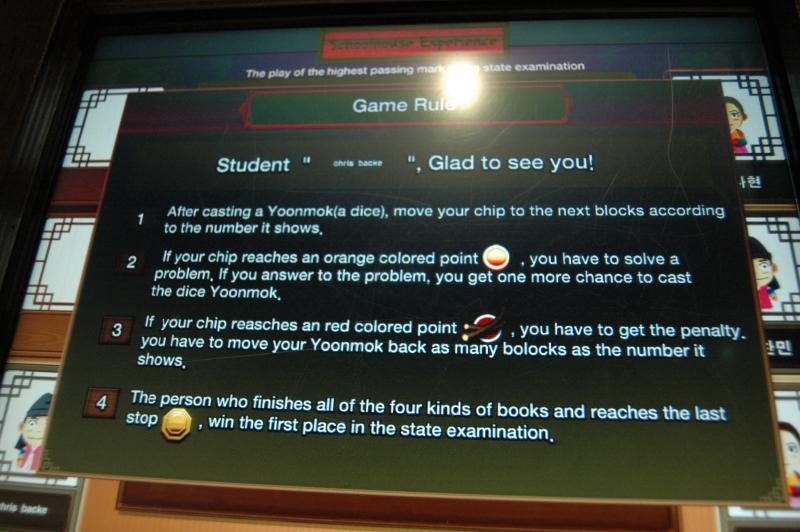 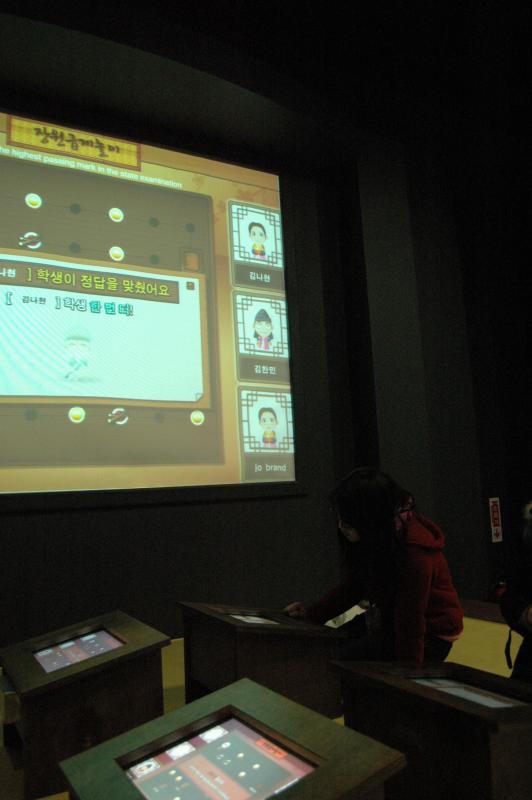 One highlight of the museum is this game based on the old state examination one took to get a government position. The modern ‘exam’ involved touching a touchscreen to roll the yoonmok – a four-sided wooden stick that served as a dice – to move about a Sorry!-like board. Several spots offered a ‘roll-again’ chance if you answered a question on Confucianism or Korean sayings. 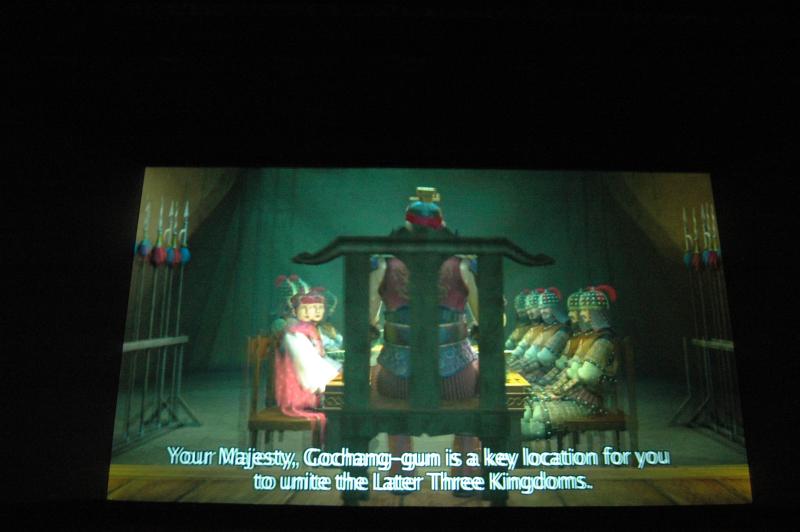 A 3-D presentation (the sign said 4-D, since the seats moved and air blew on the audience) of the battle of Gochang – a battle fought in Andong in 930 A.D. between Hubaekje and the Goryeo army led by Wanggeon, who won control of the city and renamed it Andong. The 15-minute movie had Korean audio with English subtitles, and featured more than enough action along with the plot based on history. You won’t confuse it with ‘Lord of the Rings’, but it was one of the most impressive efforts to bring Korean history to younger generations that I’ve seen.

Next stop: Hahoe Gyeomamjeongsa (하회 겸암정사) – a home built by Ryu Un-ryong (1539-1601). He wrote under his pen name ‘Gyeomam’, which he later adopted as the house’s name. 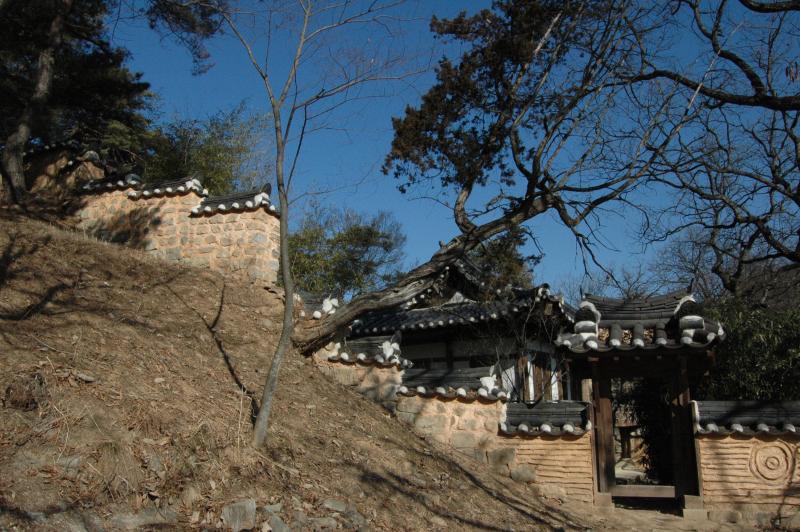 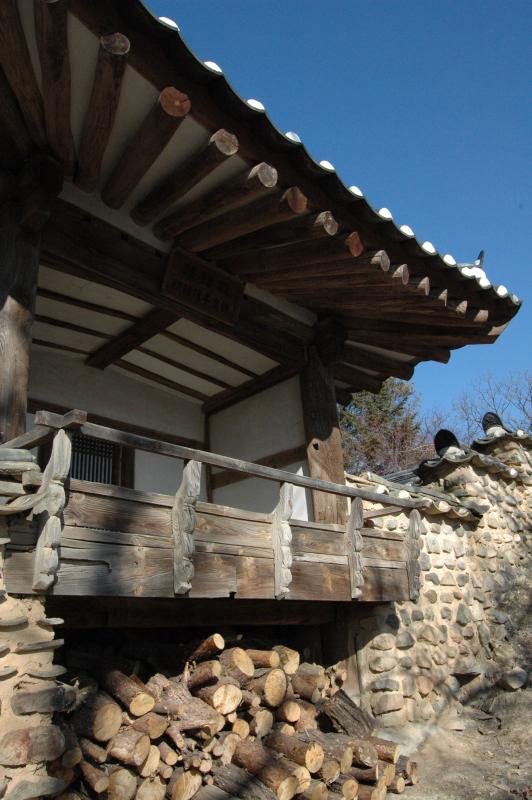 An example of the ondol system that heated the houses’ floor.

After seeing the house, we climbed a small hill near the house to take a look at the Hahoe Village, our next stop: 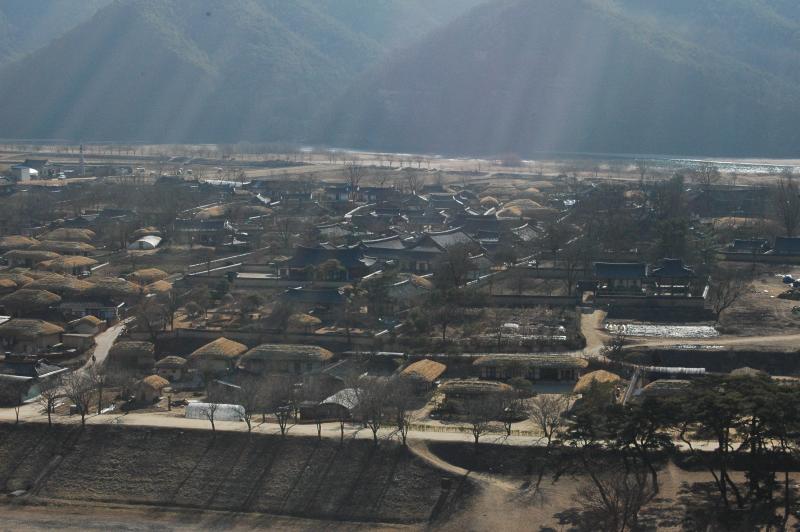 This is not a model, by the way – it’s the real thing, albeit view from the top of a hill several kilometers away. 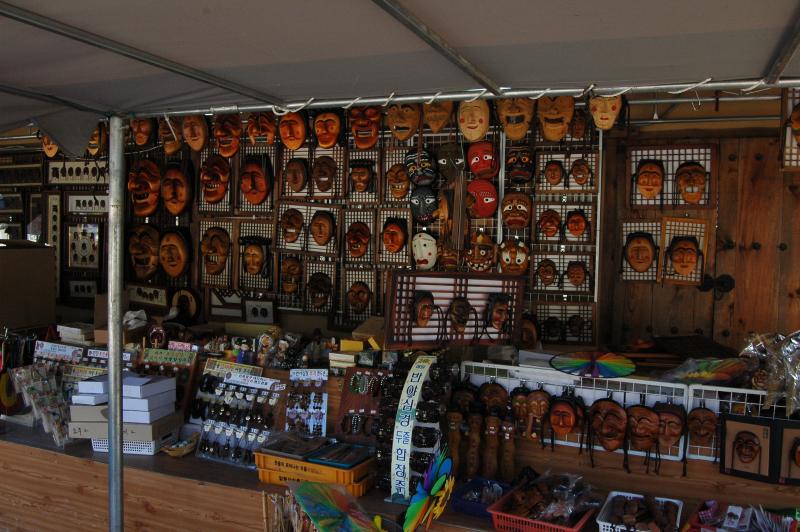 After some lunch in Hahoe Village (하회마을), we meandered around the souvenir shops nearby. Andong is fairly well-known for its preservation of a traditional mask dance. The legend behind the masks? Look here for the full story – the short version involves a plague sweeping a village. A young man named Heo Doryeong is inspired / called to make 12 masks, but to keep them a secret from everyone. His maiden snuck a peek at the last one while he was making it, and the gods killed him with one mask’s jaw left unfinished. The 12 masks each represent a different character of the ancient dances. 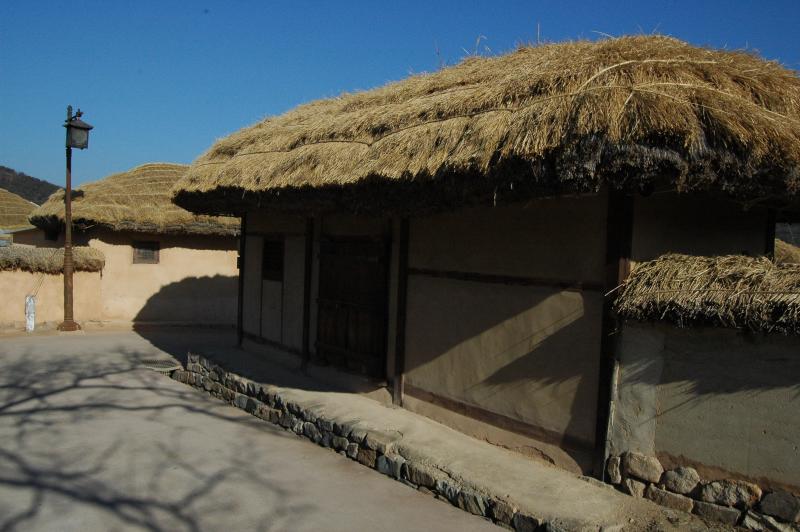 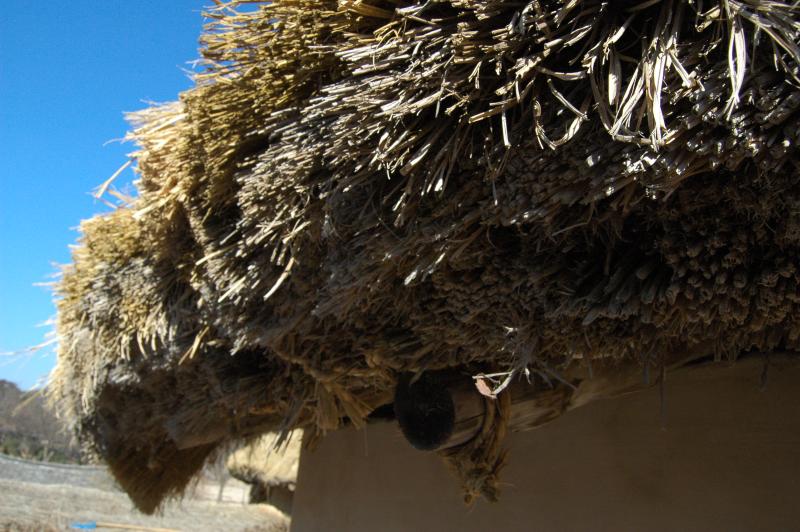 The straw-roofed houses of the area – reconstructed, of course – but still interesting to look at. 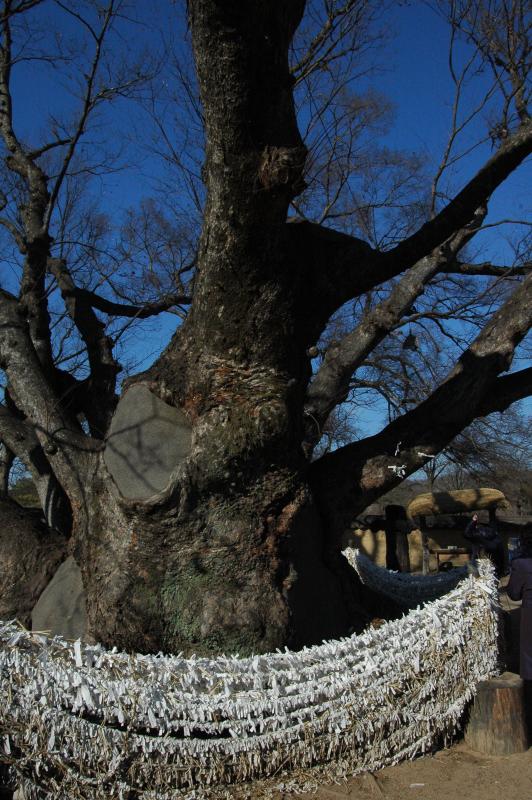 One highlight of the village – a 600 year old zelkova tree said to be the residence of a goddess named Samsin. Apparently, she’s in charge of pregnancy, childbirth, and child rearing in these parts. A nearby table had paper and marker handy, allowing you to tie your wish onto the strings surrounding the tree. 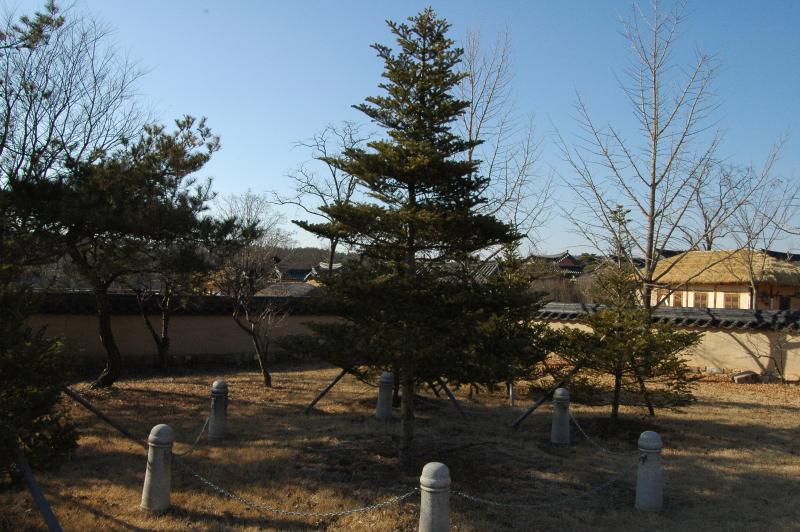 The tree that the Queen planted – specifically, the Korean fir tree that Queen Elizabeth planted here in 1999 to commemorate her visit to Andong. Even 10+ years after this event, it seems an event that will live on for all time – or as long as the signs do. 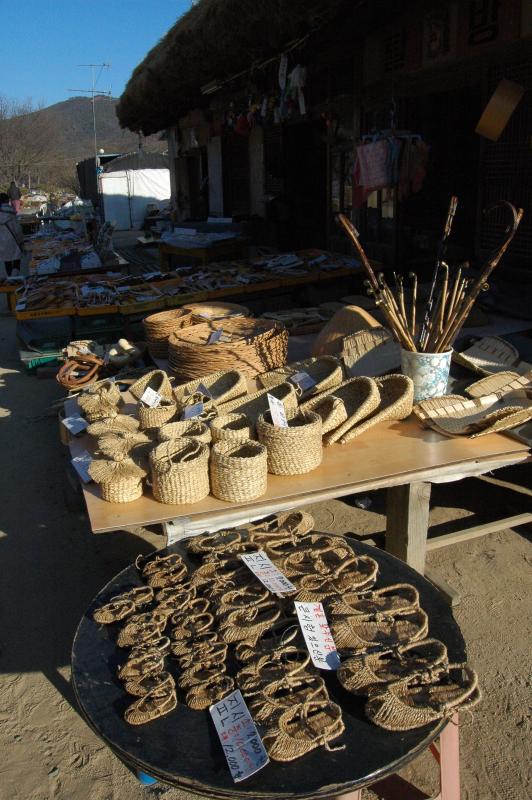 Souvenirs were scattered around the hour and a half long walking course. There’s plenty of reasons to spend an entire day here alone – but after seeing most of the highlights, it was time to move on.

Our next stop: Byeongsan Seowan (Academy of the Mountains [shaped like] Folding Screens) – a Confucian school originally built in 1614 to worship Ryu Seong-ryong. A place of calm and wonderful handiwork: 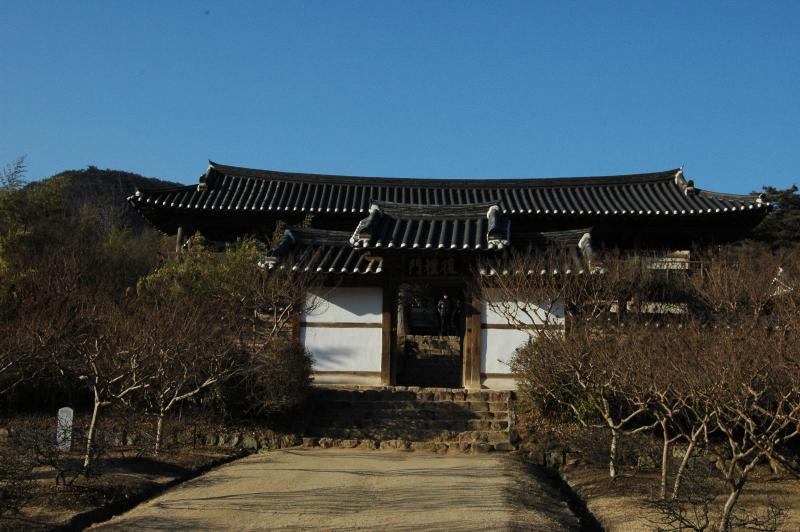 The entrance to the academy – Bongnyemun (gate). Byeongsan Seowon (병산서원) was first founded in 1572 (1575?) by Ryu Seong-ryong (Prime Minister under King Seonjo). The school flourished, though I couldn’t tell you if it had something to do with being exempt from conscription, taxation, and extra unpaid labor duties. After he passed away in 1607, his followers set up a shrine in the area to honor his tablet. Having a shrine was apparently the ticket to becoming a formal Confucian academy – after being graced with a sign featuring king-inscribed Chinese characters (屛山書院), it was considered a royally chartered private academy. A few short years later, the father of King Gojong closed all but 47 private schools across Korea in an effort to reduce the infighting between schools and to help increase efficiency within the Joseon Dynasty government. 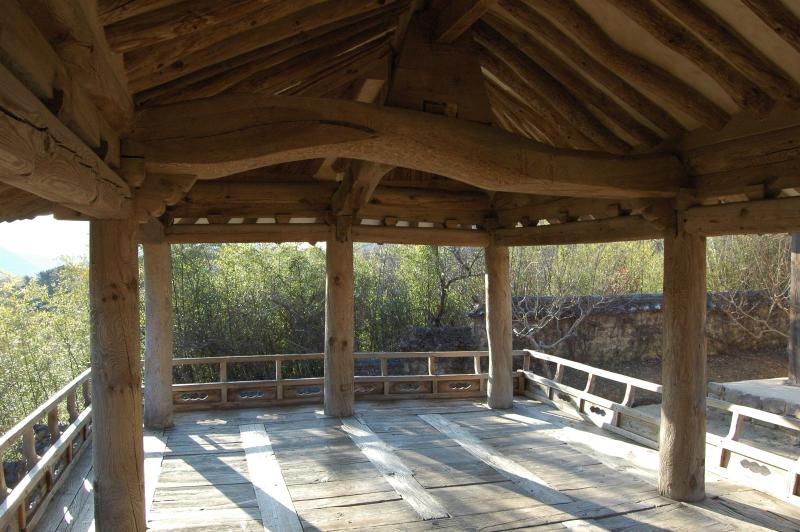 Mandaeru Pavilion – large enough for 200 people, the staircases are made of single logs and the view includes the nearby Nakdong River and Byeongsan (Mt. Byeong). 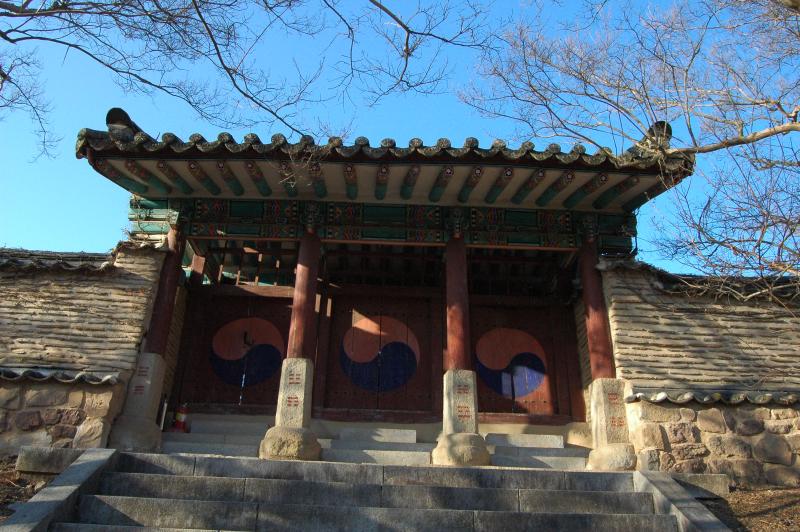 Near the back wall is Naesammun – a locked gate. Behind the gate is the shrine itself (Jondeoksa), but there was no getting to it. 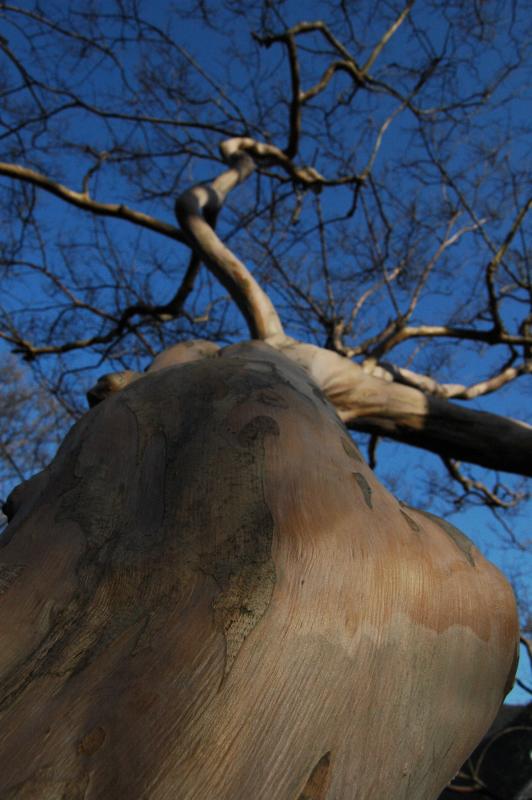 After some difficulty with the language barrier, we learned some interesting facts about this tree. Like a couple others without any bark in the area, this tree was called a ‘tickling tree’. Lightly touch or scratch the main tree, and supposedly you’ll see one of the branches moving about, as if laughing from being tickled.

Off to our last stop we go – Andong Hanji (안동한지): 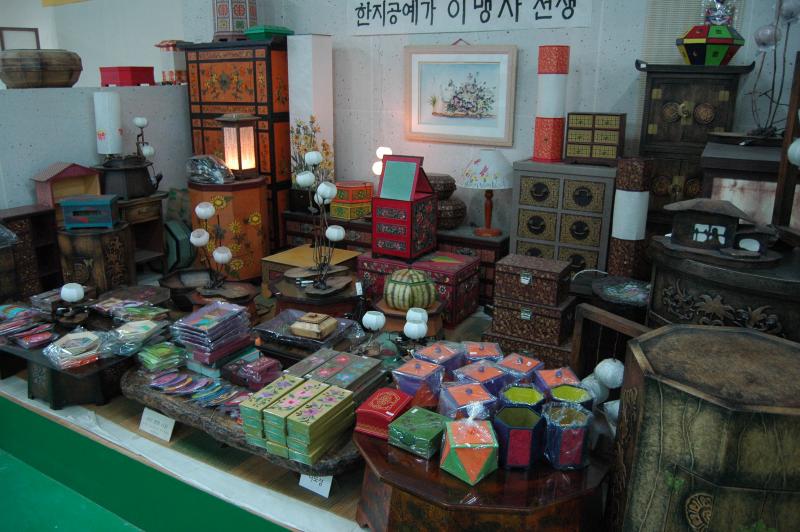 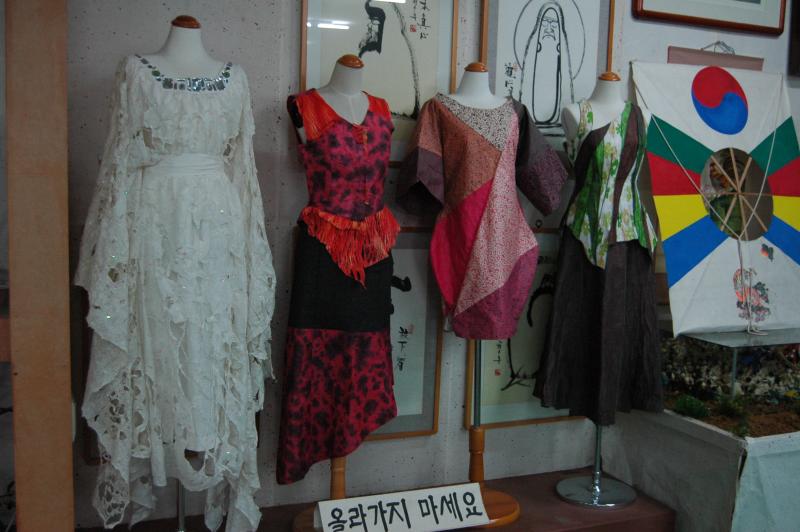 Yes, that’s paper – expertly cut, folded, molded, possibly worn, and definitely took some time to finish. Strangely enough, this was the first place we stopped. The site offers a glimpse into the world of hand-made paper manufacturing. Start with bark from the mulberry tree, then separate the bark from the fibers. 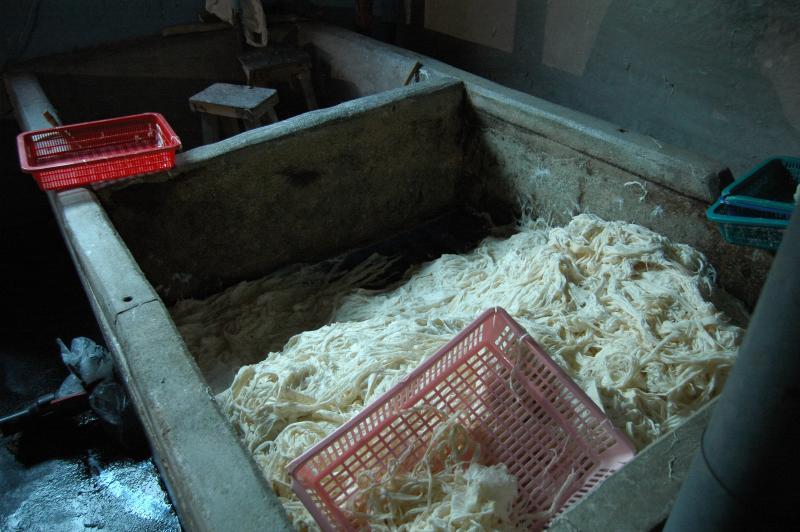 A sample of the fibers from the raw mulberry tree – this would eventually be transformed into paper after straining the pulp, adding some glue, drying the paper, and cutting or coloring according to need – all done handmade. Suddenly that little blank book that cost 5,000 won seems pretty cheap. 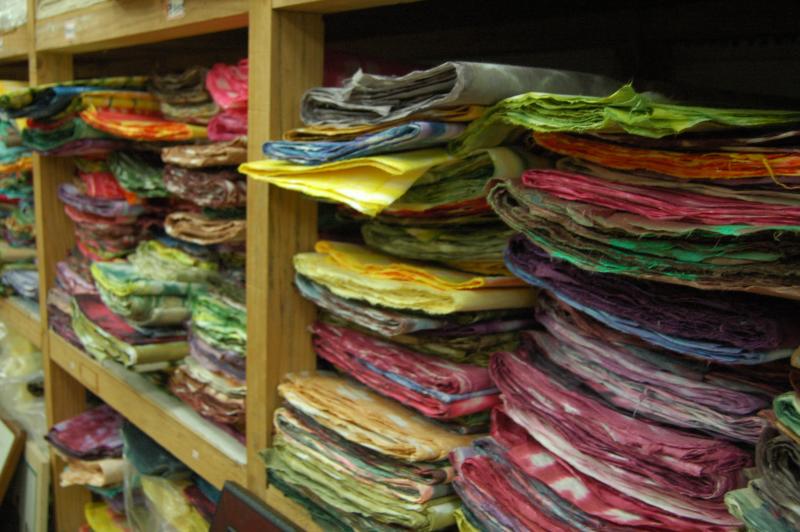 After the paper has been made, it’s time to decide what to do with it. Some paper is tie-dyed, while others have been screen-printed.

The tour van typically ends at the bus terminal, but since the train terminal is so close we asked to get off there instead. It’s a full day touring, and while we weren’t precisely rushed, taking time to smell the roses would have interfered with the schedule. That’s the trade-off for joining a group tour – seeing more things but spending less time at each. One idea is to use the group tour as a chance to discover some new places, then go back to really see your favorites on your own time.

Directions: take an express bus or train from anywhere in Korea to the Andong Bus Terminal or train station (buses are usually easier and a bit faster). One at the bus terminal, walk towards the street and look for a four-sided brown pillar advertising the tour. The tour van leaves from that area at 10am everyday except Monday. Tuesdays and Fridays the tour’s major destination will be Dosan Seowon (a Confucian school similiar to Byeongsan Seowon above); Sundays, Wednesdays, Thursdays, and Saturdays the tour will be like the one you’ve read about above. The cost of 18,000 won per person pays for the guide, the vehicle, and all admission costs – lunch is not included. For more information about the tours (in Korean), check out their website at http://andongtour.kr/coding/sub1/sub2.asp.