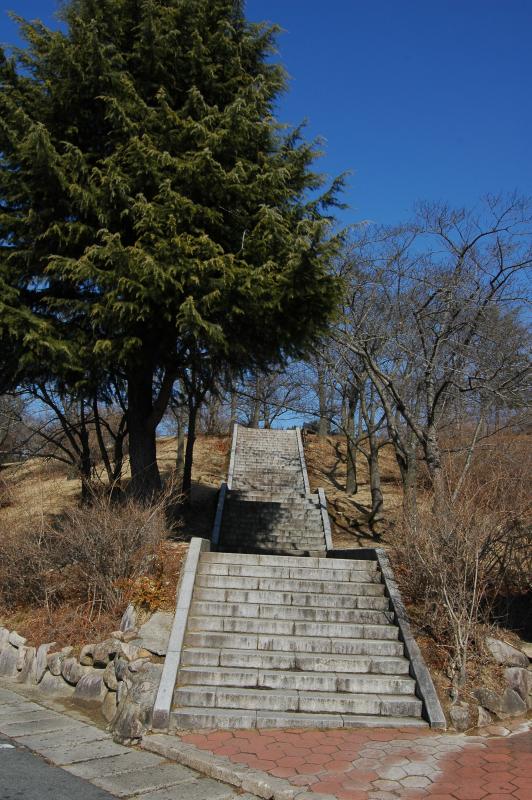 Author’s note: A version of this story has been published on 10 Magazine’s website.

Author’s note: A version of this story has been published on 10 Magazine’s website.
One of the most revered temples in Gyeongju, Bulguksa (the “Temple of the Buddha Land”) sounds like something out of a movie. It offers seven of Korea’s National Treasures, along with enough Buddha statues and monks to keep you at a permanent bow. The first small temple was originally constructed in 528 A.D., while a temple more like the one we know today came a couple centuries later. Constructed under King Gyeongdeok and Prime Minister Kim Daeseong to pacify the spirits of Kim’s parents, the building was completed in 774. As you would expect, it has been renovated several dozen times since then. The stone structures and Buddhas are original Silla dynasty construction, however. Look at the back of a 10-won coin – that’s Dabotap, an ornate 10.4 meter tall pagoda dedicated to the Many Treasures Buddha mentioned in the Lotus Sutra. The temple’s last major reconstruction was completed in 1973. In 1995, Bulguksa along with Seokguram Grotto was added to UNESCO’s World Heritage List.
Author’s note: Because this is considered a religious landmark and solemn place (and because ‘no photos’ signs were everywhere), I took no pictures to offer of the statues themselves, or of the inside of the halls. I will simply say that the beauty and presence of these halls makes a trip of your own worthwhile. 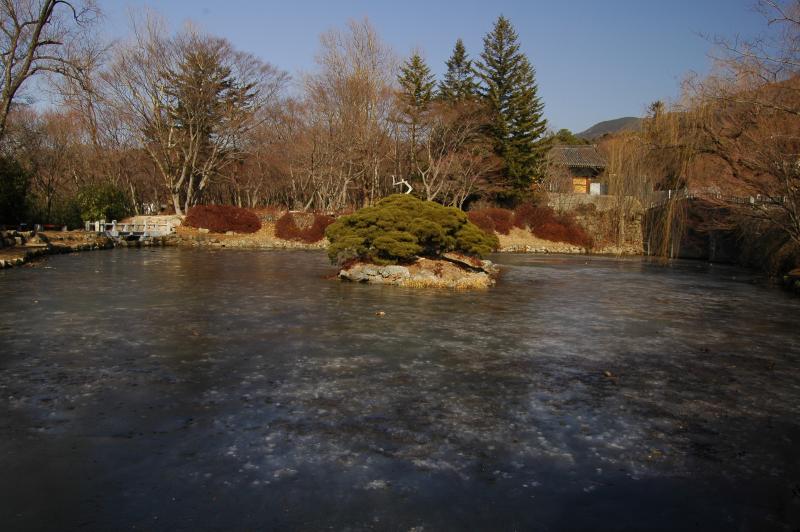 Getting to Bulguksa isn’t difficult – once you’ve arrived at the Gyeongju Bus Terminal, it’s a half an hour ride on a local bus. 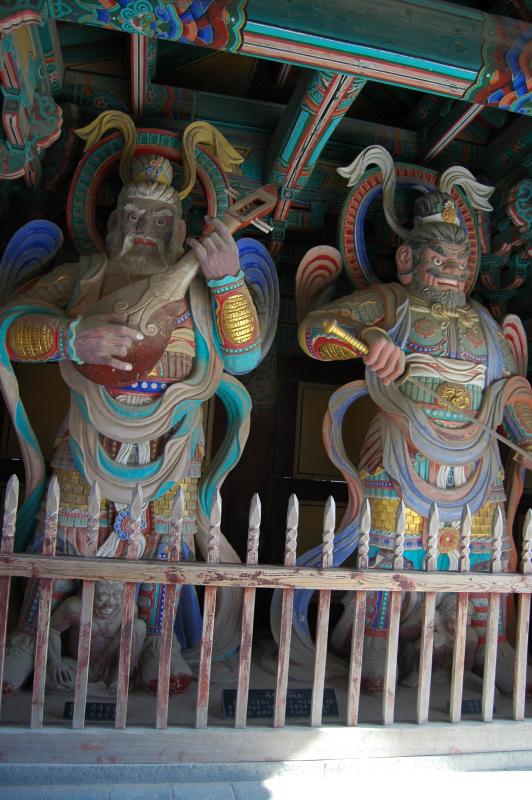 Two of the Sacheonwang, or Four Heavenly Kings, guard the entrance to the temple. They are the protect the world and fight of evil, and each can command a legion of supernatural creatures to protect the Dharma if need be. Bow to each side before moving on.
Walk straight and head towards the major building: 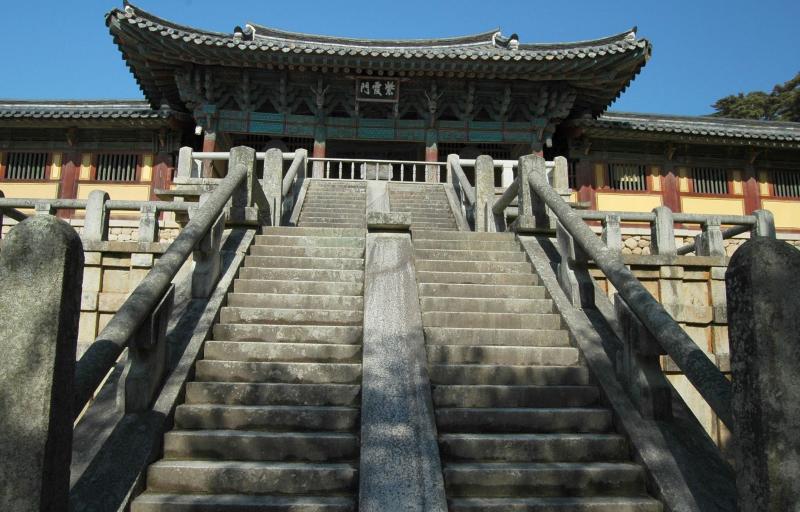 The lower portion is named Cheongungyo; the upper, Baegungyo. They total 33 steps, signifying the 33 steps to enlightenment. The gate, Jahamun, refers the golden-purple splendors shining from the Buddha, according to legend. Unfortunately, climbing the steps to enlightenment isn’t allowed – you’ll have to go around to the side of the building and enter from there. 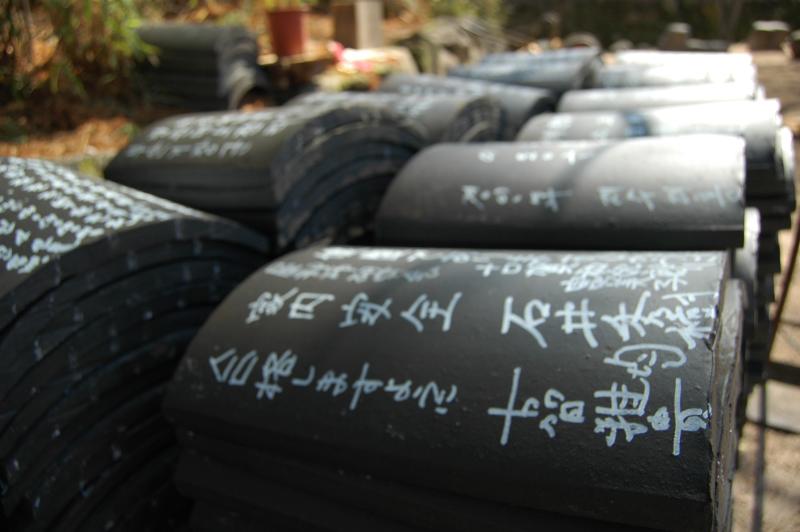 Just outside the temple walls, you could write your message on a shingle for a donation. 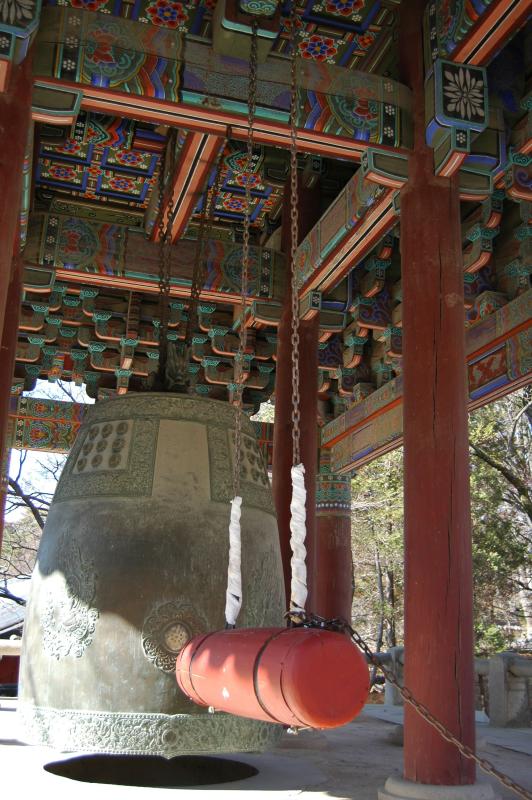 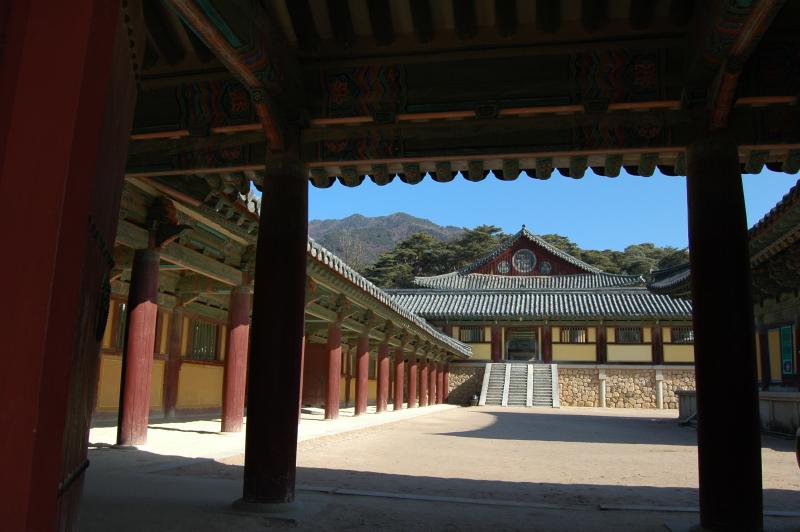 Looking into an inner layer of the temple. The building ahead is Geukrakjon, or Supreme Bliss Hall. Inside is one of the seven National Treasures, a statue of Amitabha (the Buddha of Cosmic Light) (Geum-dong-amita-yeo-re-jwa-sang). Originally constructed in 751 AD and restored on the original platform and stones in 1750. 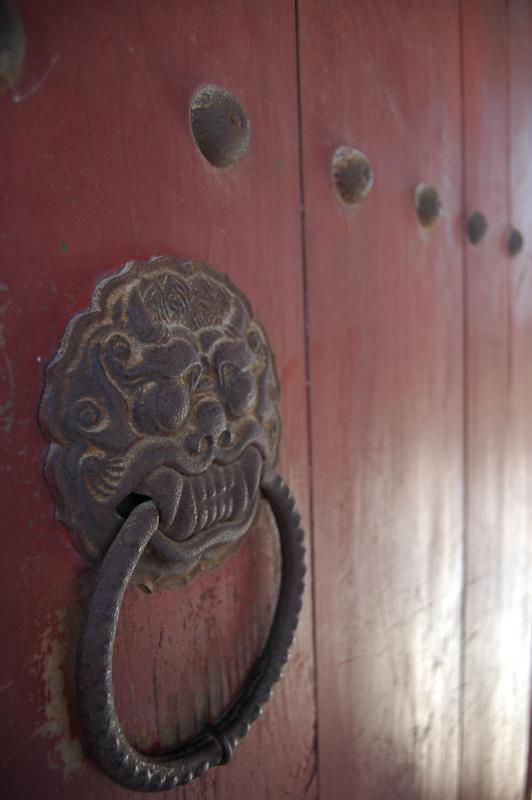 Although fastened to the door, the craftsmanship of the handles is striking. 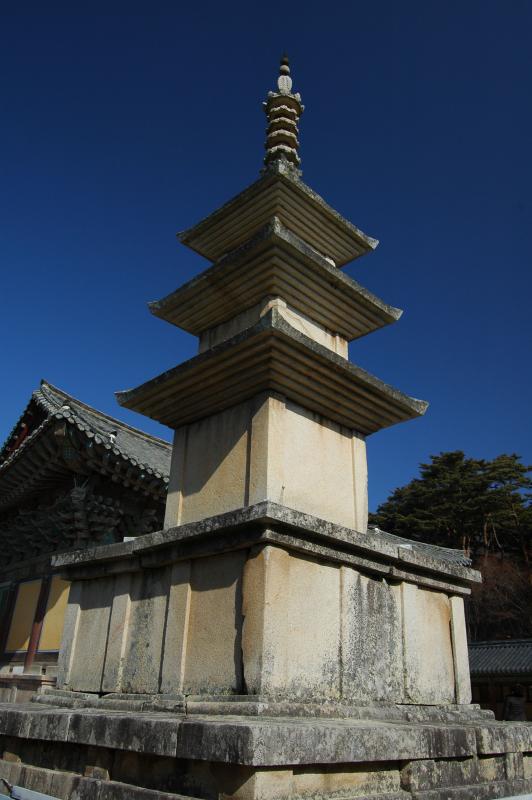 A little further in, we have National Treasure #21 – Seokgatap. A 10.6 meter tall, three-story pagoda right next to Dabotap: 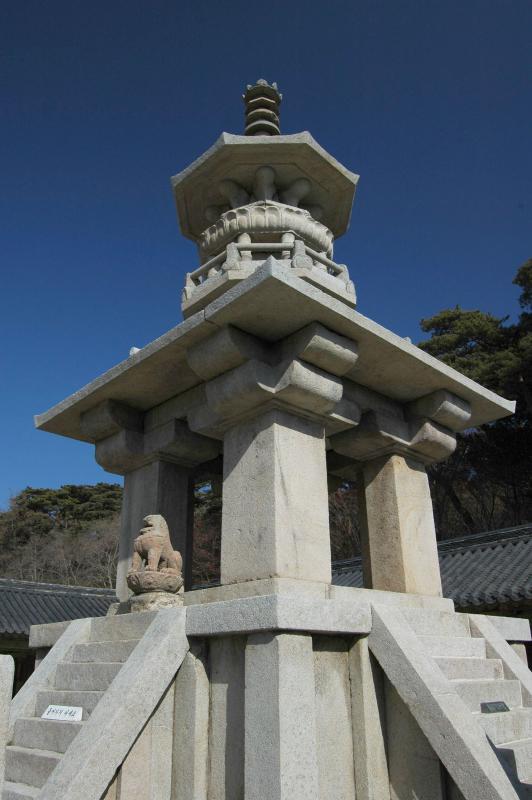 National Treasure #20: A 10.3 meter tall pagoda, the name is derived from a sutra in which Dabo Yeorae (Prabhutaratna-tathagata) is verifying the truth of Seokga Yeorae (Sakyamuni). Symbolically speaking, these two pagodas refer to the truth of the Buddha’s words. They’re also a sign of balance – Dabotap is complex while Seokgatap is simple. 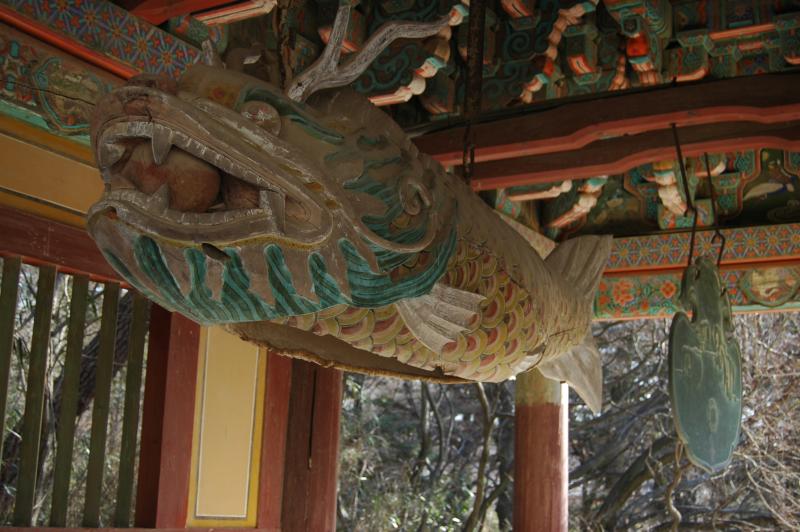 One of the four instruments used to ceremonially wake up the sentient beings of the earth. In the background is a cloud-shaped copper plate – take a guess which creatures that’s supposed to awaken. 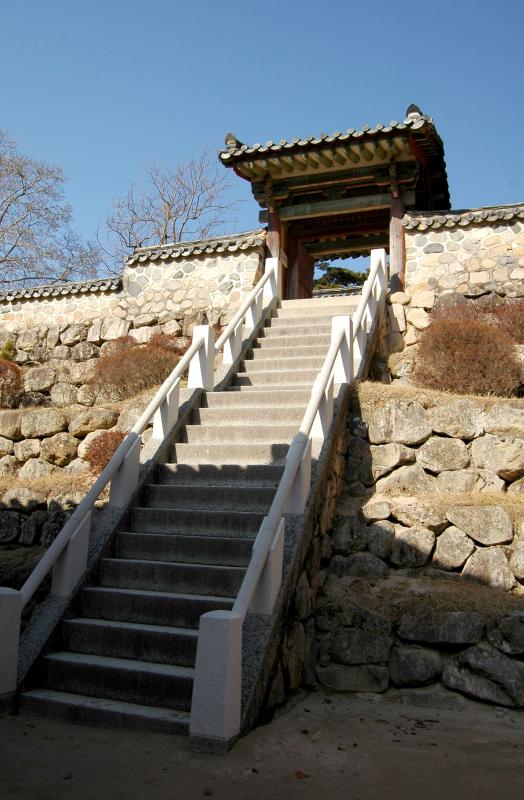 The picture doesn’t show it, but these are very steep steps – be careful going up as you continue meandering. 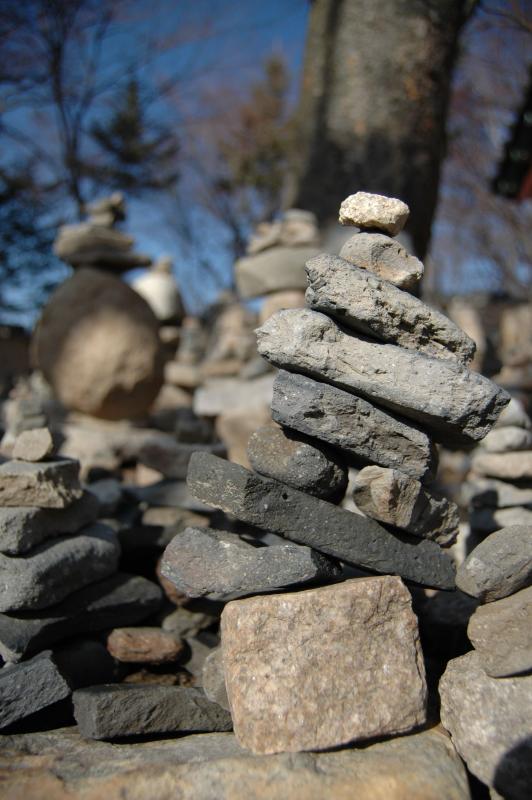 A large collection of rock piles – interestingly enough, a number of roof pieces are blended in with the rest of the rocks. 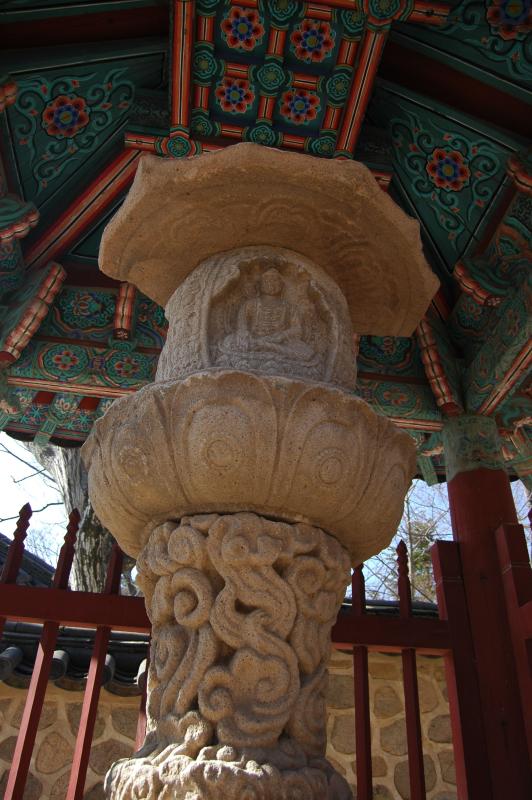 Treasure #61: A sarira pagoda – looking more like a stone lantern, it’s not the sort you’re used to seeing with distinct levels. A sarira was used to hold the remains or relics of nobility or priests; this one supposedly has the remains of eight. The sarira’s style is from the Goryeo Dynasty, but was influenced by the earlier Silla Dynasty.

The temple – and the nearby Seokguram Grotto – is gorgeous. There’s enough religious icons for several temples, and takes an afternoon to thoroughly experience. Even if not Buddhist, there’s a wonderful sense of peace and quiet in the air. Because it’s so well-known, coming on the weekend means there will be a crowd, which takes away from the sereneness. If you go, find your own bliss somewhere in the temple – there’s plenty of places to find it.

Consider adding Seokguram Grotto as an addendum to your trip here – it’s a 20 minute bus away, but the bus stop is just across the street.
Ease to arrive:

Directions to Bulguksa: From Gyeongju Bus Terminal, cross the street to the bus stop and get on bus #10 or #11 (1,500 won, about a 30 minute ride). Both will stop at Bulguksa – listen carefully to the audio announcements (Korean only) or tell the bus driver where you’re getting off and look for their cue. Once off the bus, walk past the tourist information booth and up the hill. Admission: 4,000 won; open 7:30am – 5:30pm.

© Chris Backe – 2010 This post was originally published on my blog, Chris in South Korea. If you are reading this on another website and there is no linkback or credit given, you are reading an UNAUTHORIZED FEED.