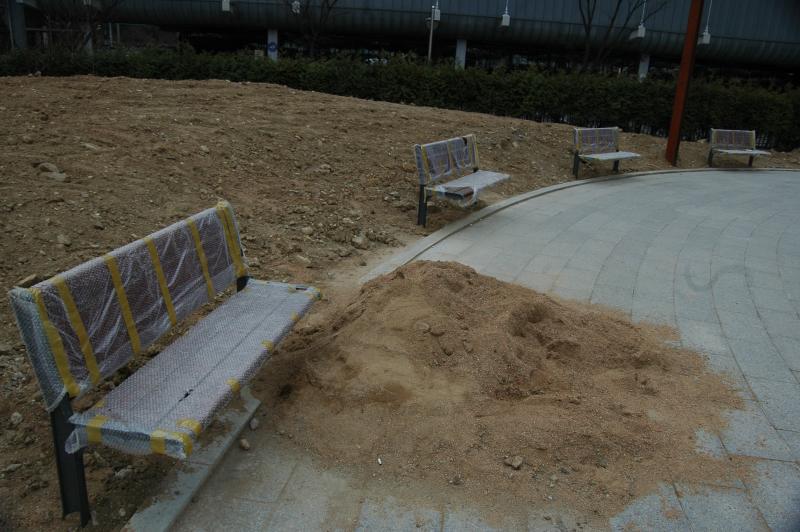 The history of the area has a lot to do with garbage. As Seoul developed from the early 1960’s to the 1990’s, piles of trash on Nanji-do (once an island) got larger – at one point, they were 95 meters tall for a length of 2 kilometers. In 1996, the city began to fix the problem with a number of projects – some designed to stabilize the area, others for preventing contamination. Methane gas was reused as heating energy used for the World Cup Stadium and an area with several apartment complexes. An ongoing plan combines information technology and ecological considerations including the World Cup Park and the Sangam New Millennium Town. That plan started in 1998, and continues to develop as the Digital Media City does. 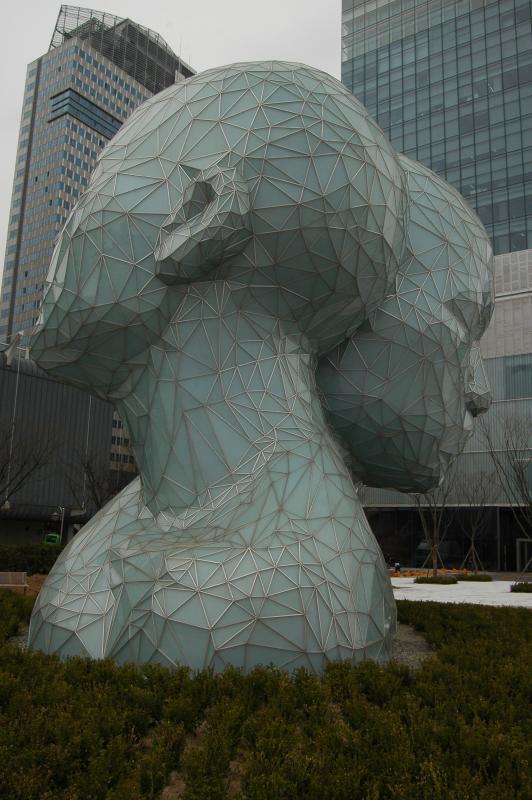 A nice sculpture nearby the bubble-wrapped benches.

There isn’t exactly a lot of life in the area – being a construction zone must scare off some of the tourists, while being the weekend means the workers are (hopefully) relaxing elsewhere.. At 542,000 square meters, this area will definitely have a lot to offer, although little is interesting to the public. 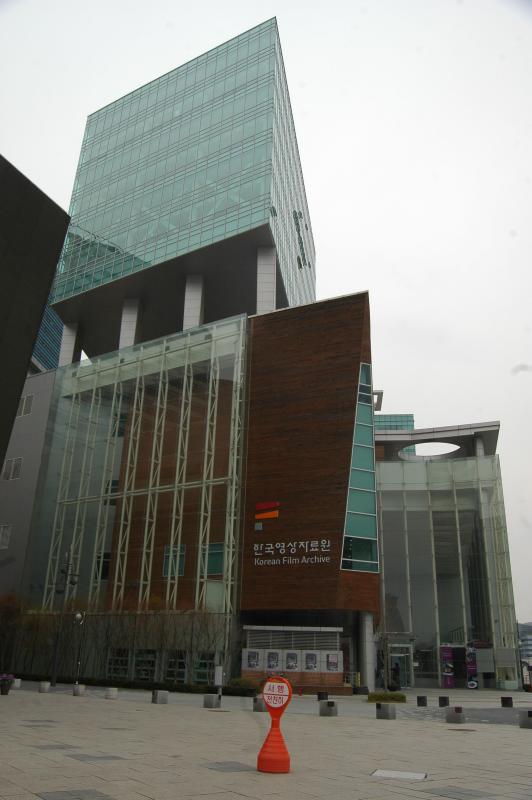 The highlight of the trip – the Korean Film Archive AKA Korean Film Museum (한국영화박물관). Not only was it open, but free admission and a free audio guide in English (deposit your ID for the audio guide) gave us every reason to check it out. 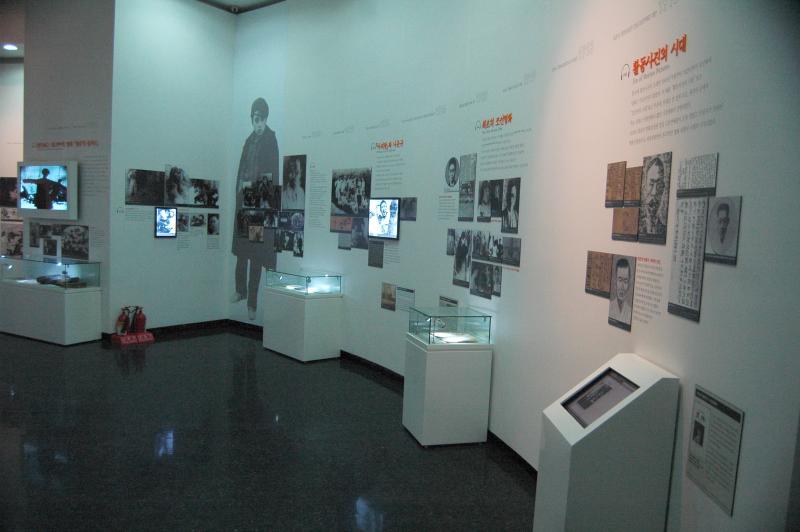 Opened on May 9, 2008 by the Korean Film Archive, this very modern museum offers plenty of explanations on the audio guide. There’s far more audio than visual elements (which are entirely in Korean, unfortunately), so you’ll either be listening to each exhibit explained for 2 minutes or skipping to the next track. It’s not location-sensitive, but working the iRiver MP3 player isn’t complex. 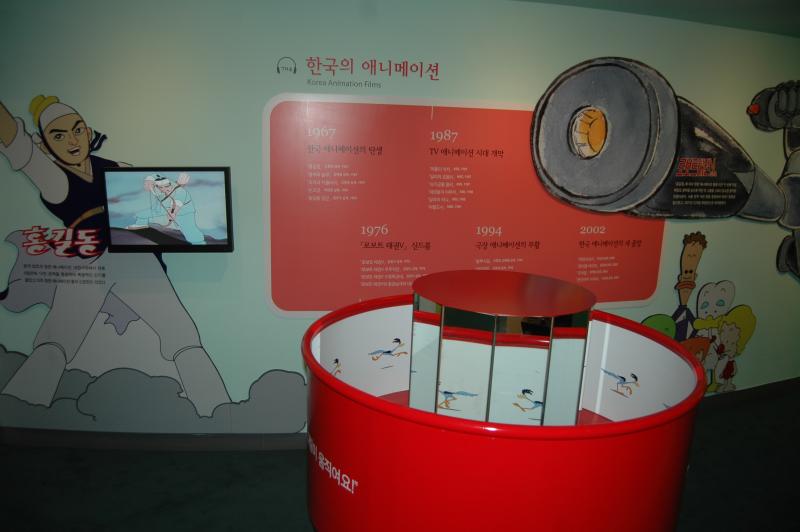 A bit of film history for the kids – spin the red wheel to animate the Roadrunner. 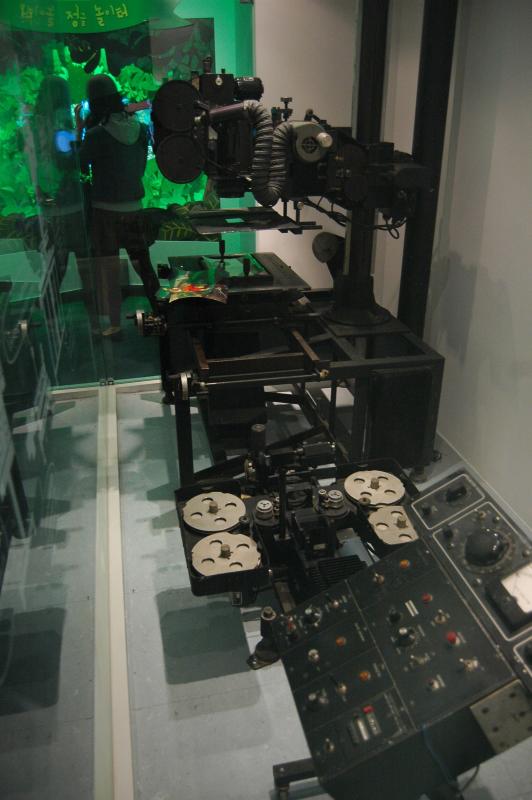 Some original camera equipment – protected behind glass but nicely visible. 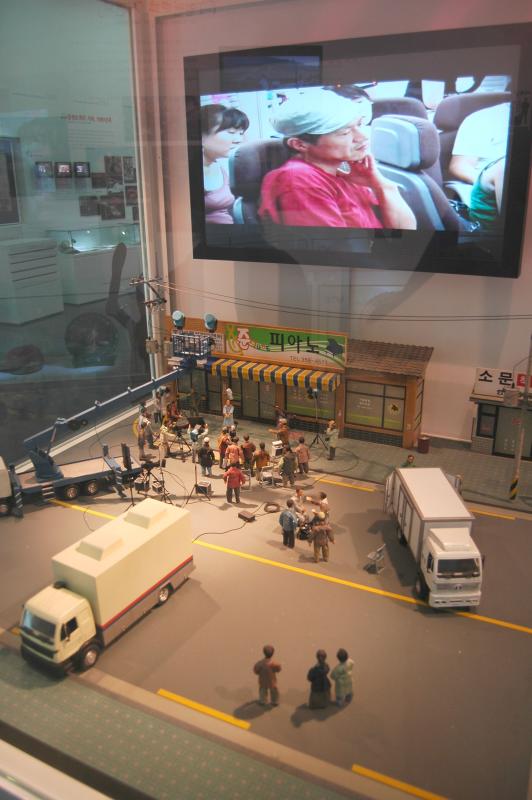 An interesting model of how Koreans film – often on location instead of in a studio. After two-plus years in Korea, it’s amazing how often I’ve run across cameras on tracks, huge lights with reflectors, and so on. The screen at top displayed a loop of several scenes from different movies – no audio, but some had Korean subtitles. 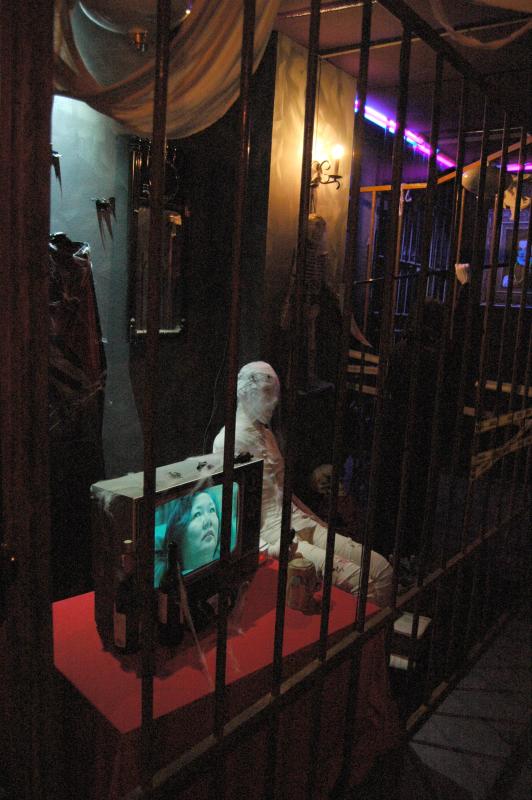 Inside the special exhibit – a collection of props from any number of Korean horror movies. Open through August 31st, it’s not overly scary, although the videos do help in setting the mood. 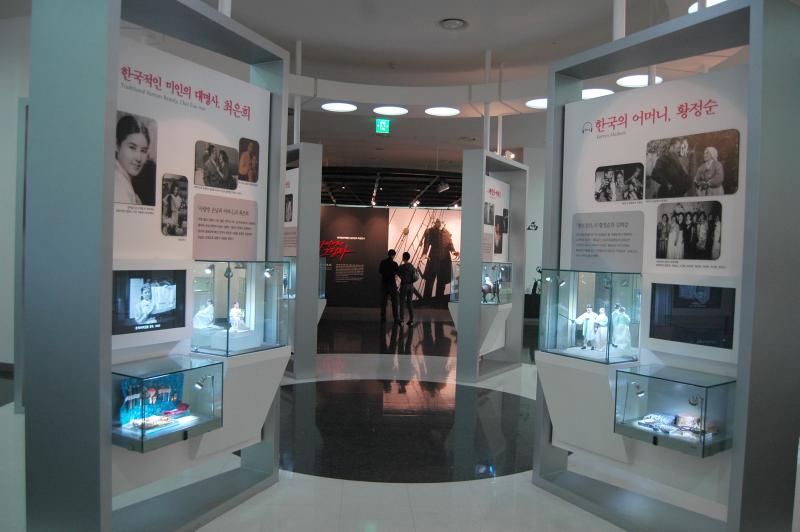 One element I appreciated: giving Korean actresses their due. Given a permanent center stage in the first major area, each display features a figurine, some personal items, and scenes from several movies from the period.

A brief tour of the souvenir shop revealed a number of classic Korean movies with English subtitles for about 10,000 won. While you’d need to ask a film buff which ones are worth watching, I suspect you can’t go wrong with any of the movies available.

Finished with the Korean Film Museum, we meandered on: 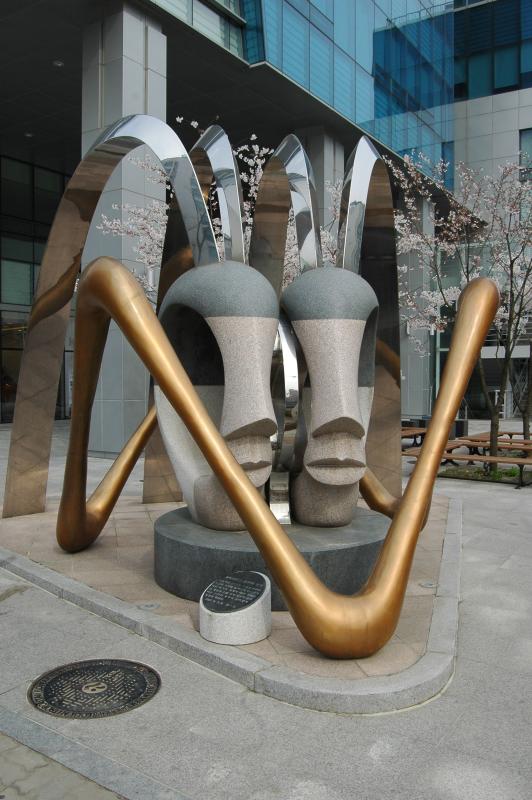 Some more public art, along with the ubiquitous cherry blossoms. 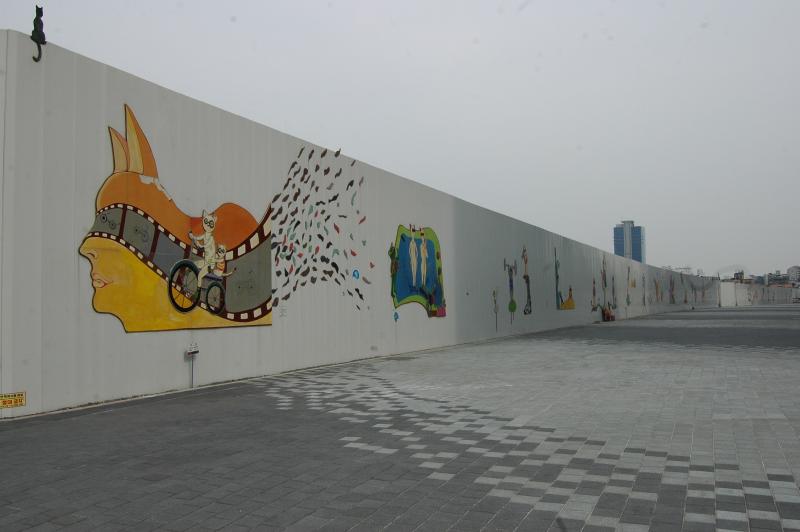 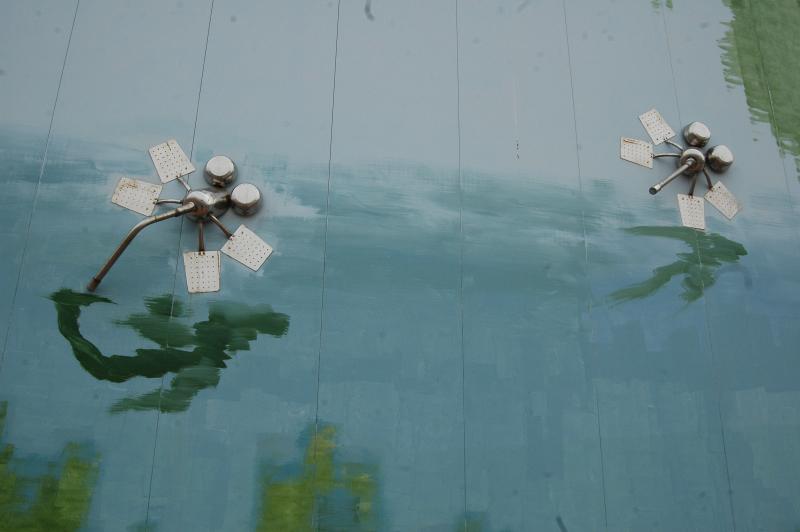 Although a number of the buildings are under construction and won’t be completed for years to come, the murals are entertainingly cute. There’s some information scattered about which companies will be in which buildings, but they’re not likely to be for tourists. 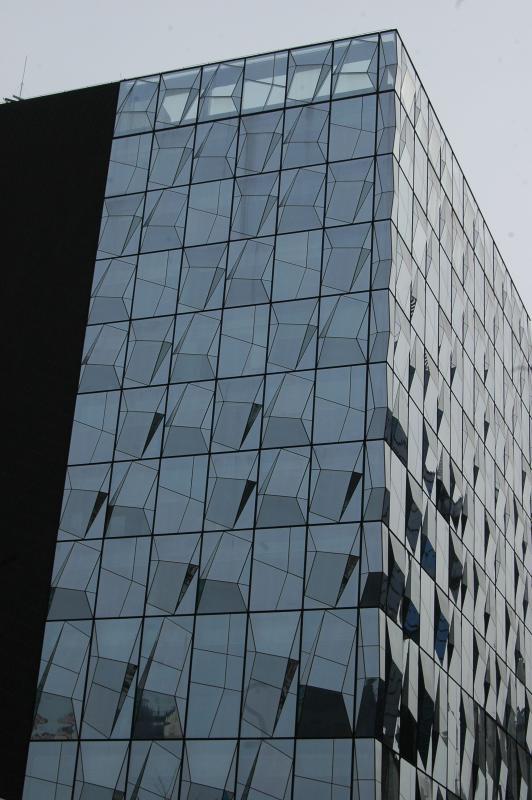 The area is worth visiting if you’re interested in the Korean Film Museum / Korean Film Archive. If not interested in walking around a museum, visit the nearby World Cup Stadium or park instead – beyond whimsical murals and construction, there isn’t a whole lot for tourists to see. For more information about the area’s future plans, one official website has some details.

Directions to the Korean Film Museum: Take line 6 of the Seoul subway system to the Digital Media City station (formerly Susaek, if you have an older subway map). Take exit 2 to street level, walk 200 meters to the first major intersection and turn right. When you see the DMC Information Center, turn right on the next street. At the next intersection, turn left, then walk another 300-350 meters. While not huge, the words ‘Korean Film Archive’ are readily visible on the side of the building. Open 10am-7pm Tuesday, Thursday, and Friday; 10am-9pm on Wednesday, and 10am-6pm on Saturday and Sunday (closed Mondays and holidays). Free admission; free audio guides available in English, Korean, or Chinese. For more information, see their official website.