Although it’s the final day of the trip, the third day around Jeju offered as much to see as the rest of the weekend. Breakfast in our hotel, then we loaded the bus and headed to Hallim Park (한림공원): 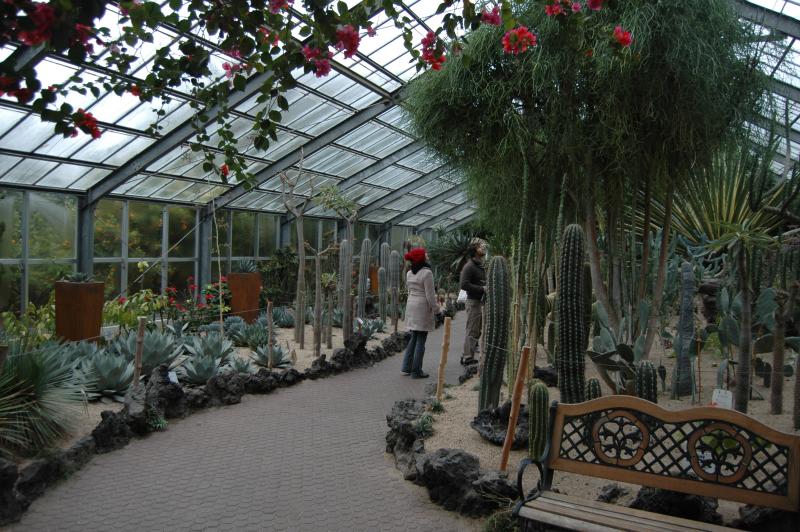 Although it’s the final day of the trip, the third day around Jeju offered as much to see as the rest of the weekend. Breakfast in our hotel, then we loaded the bus and headed to Hallim Park (한림공원):

One of the first sights on the tour route was a greenhouse filled with cacti. Lots of species of cacti are represented quite nicely, although the greenhouse was no warmer than the outside. 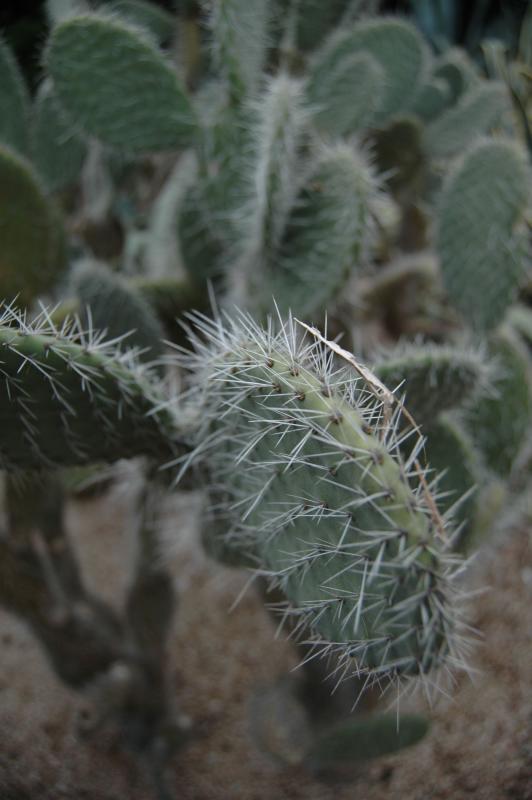 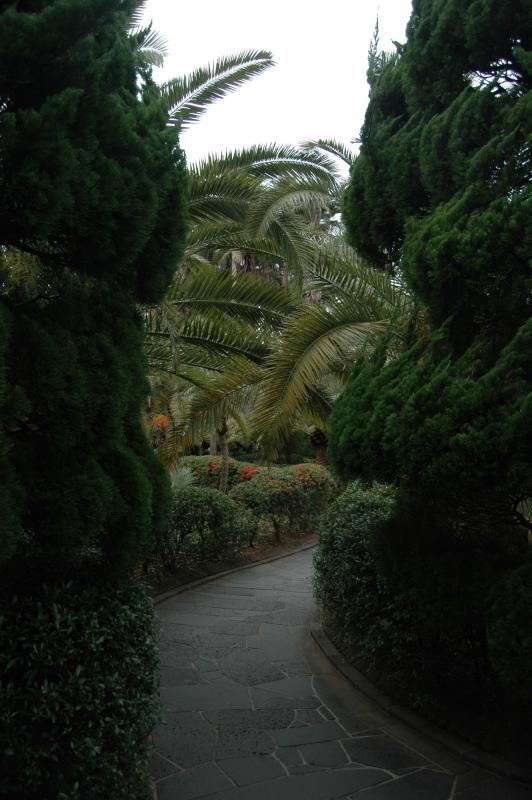 Yes, it’s December. Yes, those are palm trees – and quite a few varieties of them. Yes, it’s cold. But they’re surprisingly hardy trees – none of them seemed to be suffering in the cold. First planted in 1971 by founder Bong-gyu Song, a few faded pictures scattered across the park show the owner planting the young trees. 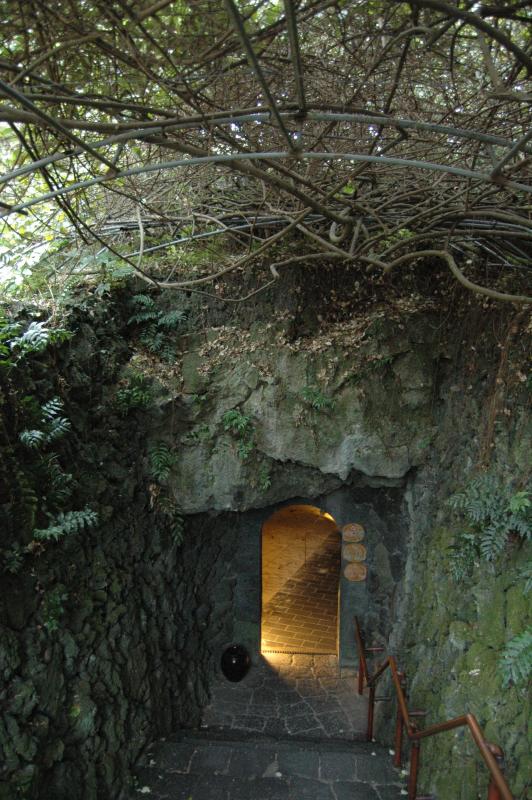 The entrance to one of Jeju’s lava caves – while there are several around the island, the two you’ll see as part of this park are Hyeopjae cave (협재굴) and Ssangyong cave (쌍용굴). A number of stalactites and stalagmites are present within the cave, which are supposedly very rare in caves such as these. 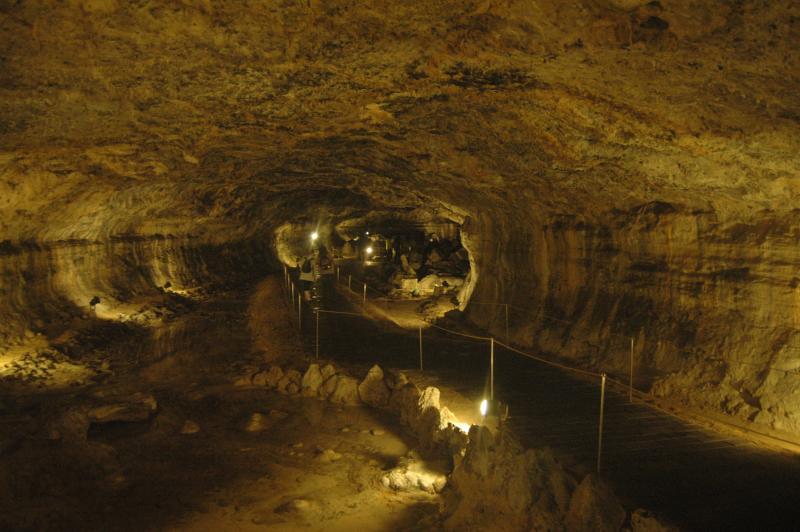 The walkway is tourist-friendly, though it’s clear there’s more to the cave than is open to the public. Scientific research and environmental protection are the justifications – besides, there’s plenty of cave that’s opened to the public.

After a brief excursion to ground level, we entered Ssangyong cave – formed by an eruption of Hallsan about 2,500,000 years, Ssangyong is supposedly the only place in the world where a lava cave and a limestone cave are joined together. 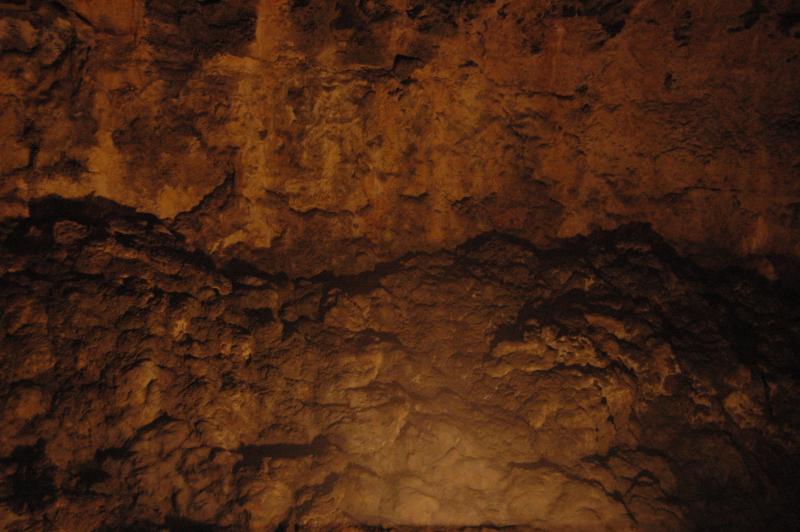 That’s frozen lava right there – it makes up much of the inside walls. 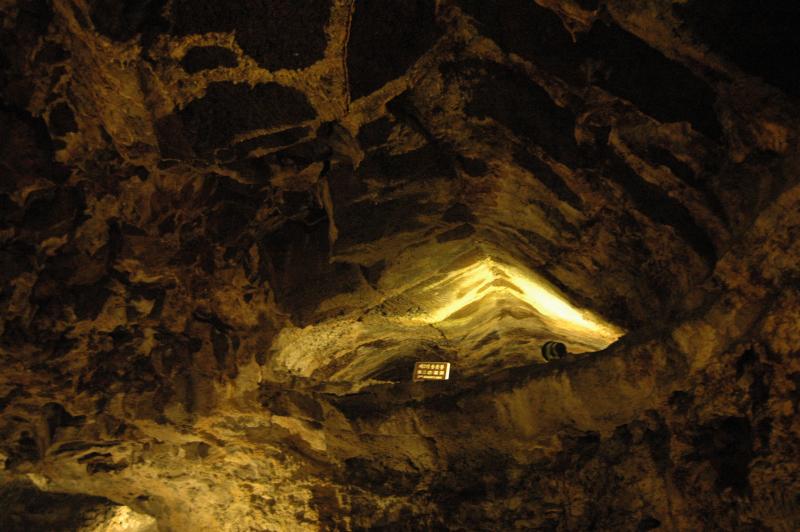 Seeing shapes in the rock is something worth putting up signs and highlighting. This time, the light shines on the ‘spine’ and ‘scales’ of a dragon, as though it’s hiding in the cave. 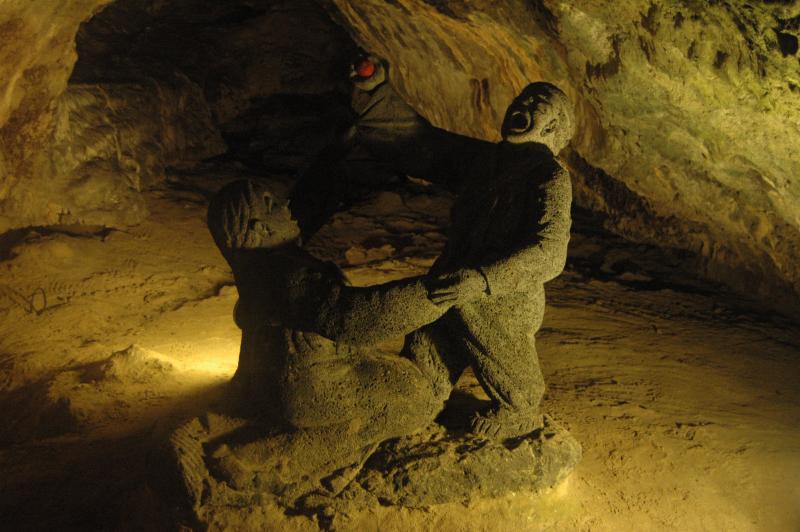 A more artificial statue highlighting the legend of Dr. Jin. After escaping into a cave during a shower, Jin met a girl inside the cave and played with her. After awhile, he was told by his teacher to swallow a bead discovered the girl was a disguised old fox, and was saved by another man. Since swallowing the bead, he was able to see everything about the human body and became a renowned doctor. The statue is of Jin swallowing the bead. Definitely an odd story, and I’m not quite sure what the point except perhaps to listen to your teacher…?

The next area was a stone and bonsai garden: 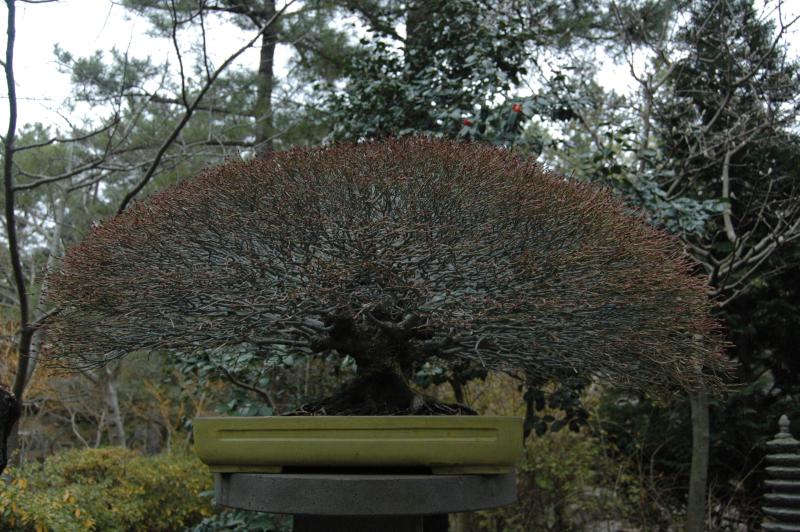 Quite a few trees were more than a century old, and have obviously been maintained throughout the years. There’s not a lot of information about who’s been doing the maintaining; whomever it was, they did a great job. 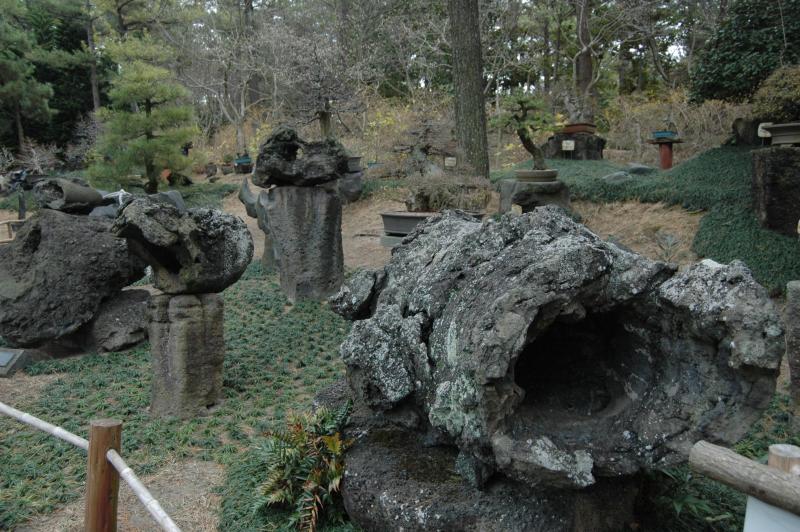 Some interesting stones – when magma from Hallsan covered the trees, the trees were burned out and several holes were made under the hardened magma / lava. Look carefully for evidence they were once trees – a pine cone can still be seen in one of the exhibits.

After walking around the loop, a souvenir shop awaits; before that rests a white peacock (백공작): 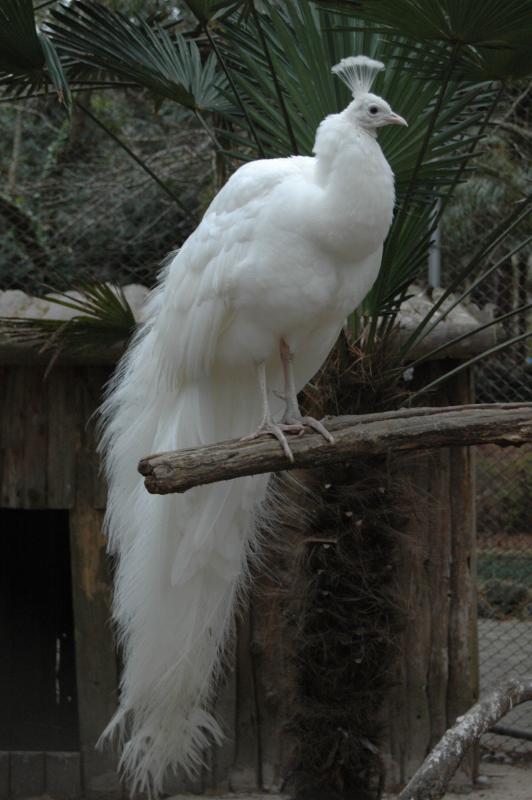 After going through the souvenir shop (the only way to move on), we found ourselves in the Jae-am Folk Village: 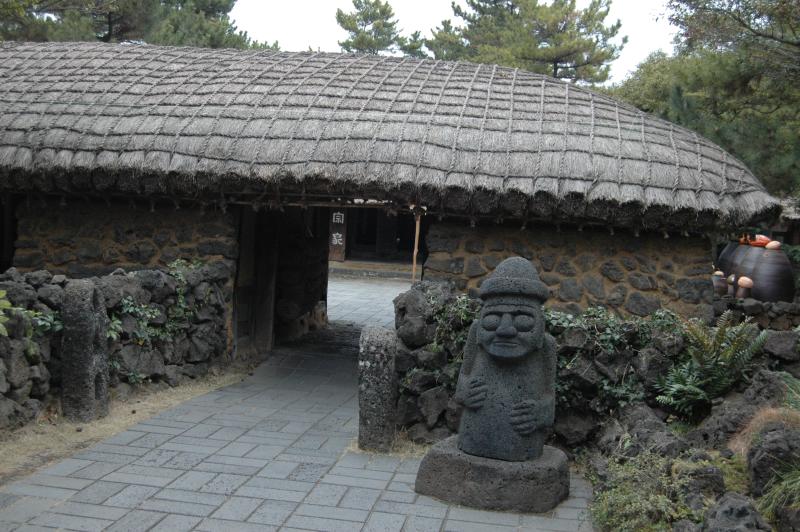 An example of the traditional thatched houses once found in Jeju’s rural areas. It’s quite nice to note the volcanic rock seen everywhere, and the contrast between the rock and straw.

Although there was more to see in the park, we had to get back to the tour bus (yes, taking pictures and reading signs does tend to slow me down – sorry) and get on the road to our next stop – Jusangjeollidae, or one of Jeju’s cliffs: 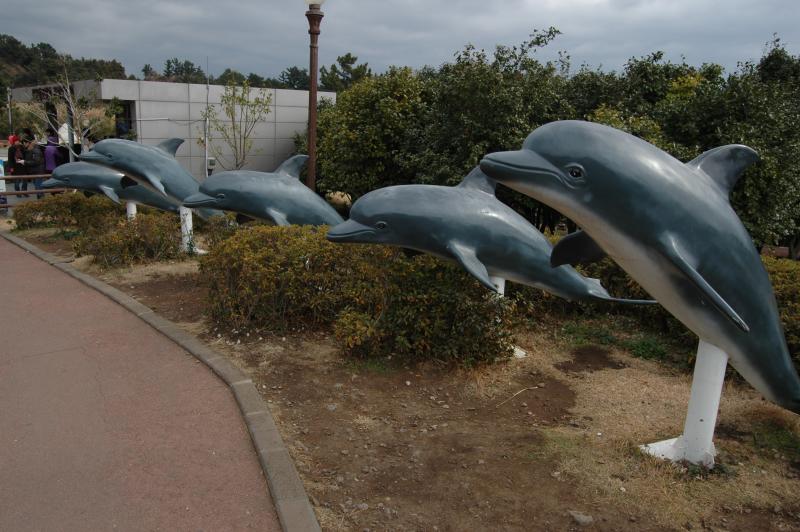 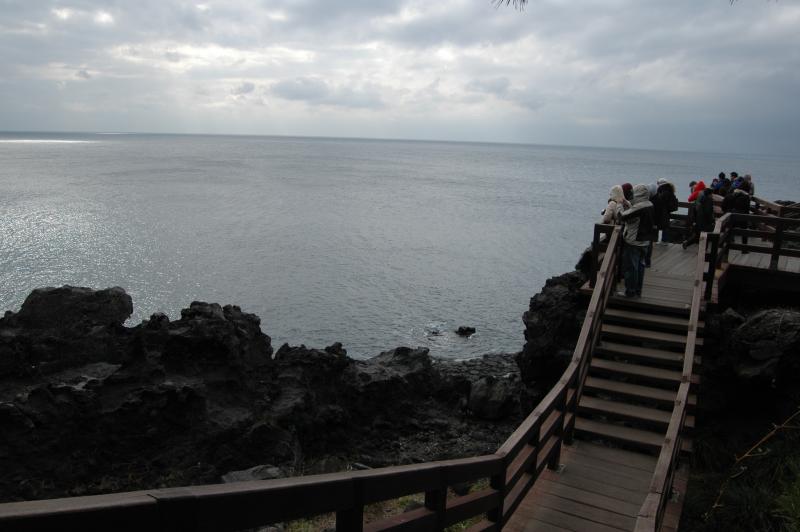 The observation deck is the highlight – looking out from here allows some beautiful views, even in the winter: 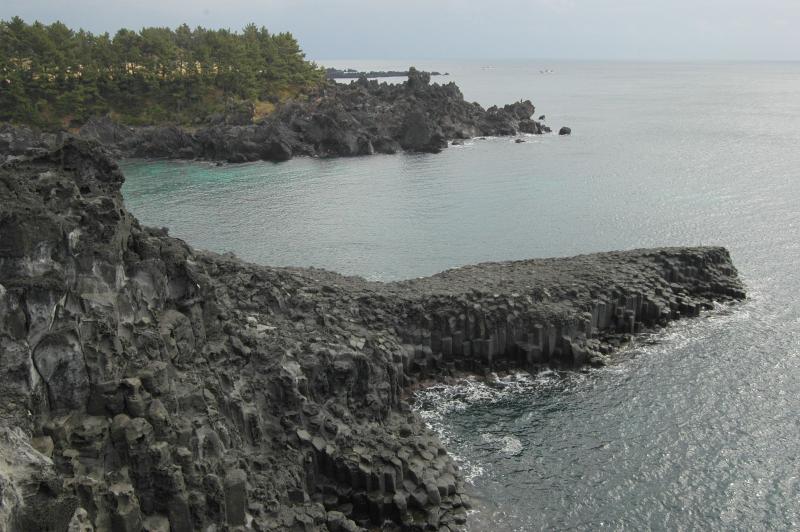 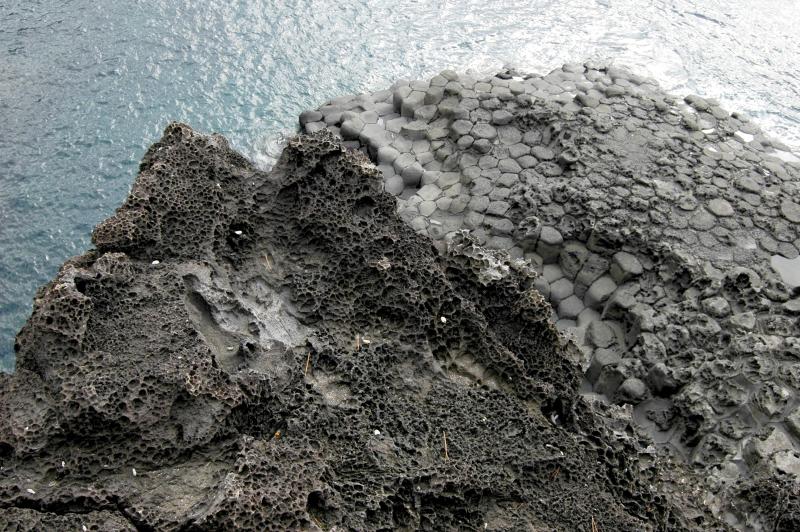 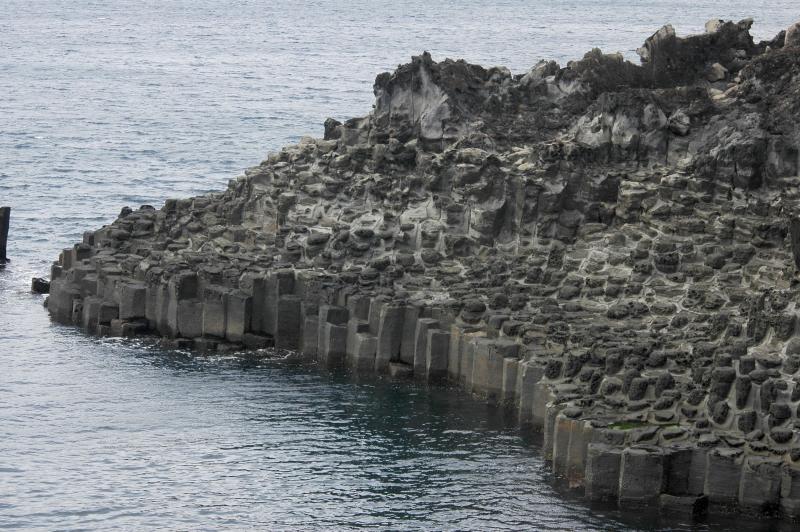 The sign nearby gives a geological lesson: the hexagonal patterns were formed by cracks in basaltic lava (it contracts as it cools). A great contrast to the lava rock patterns right next to it. Walk around the rest of the park if you like, but there are few views better than those from the observation deck.

Our last stop was the controversial and famous Loveland – an intriguing display of the human forms and sexuality. I created a separate post for that since it’s NSFW (not safe for work) – consider yourself warned.

After making our way back to the bus, we rode the Mysterious Road – a natural optical illusion. You appear to be going uphill, but in reality you’re riding downhill. No pictures, and there’s not really a lot to see when riding on a bus.

Back to the airport and back to Seoul – the more we visited and explored around Jeju, the more there was to see. Going on a guided tour instead of doing it yourself has its good points and bad points – in three days we got to see more of Jeju than we could have seen on our own in a week, although we did feel rushed in some places.

As a whole, the Adventure Korea trip was well-planned, well-managed, and well-executed. Arrangements were as expected, and I had no problems asking questions or getting information from our fearless leaders. They come highly recommended by this traveler. Check out their future trips at www.adventurekorea.com.