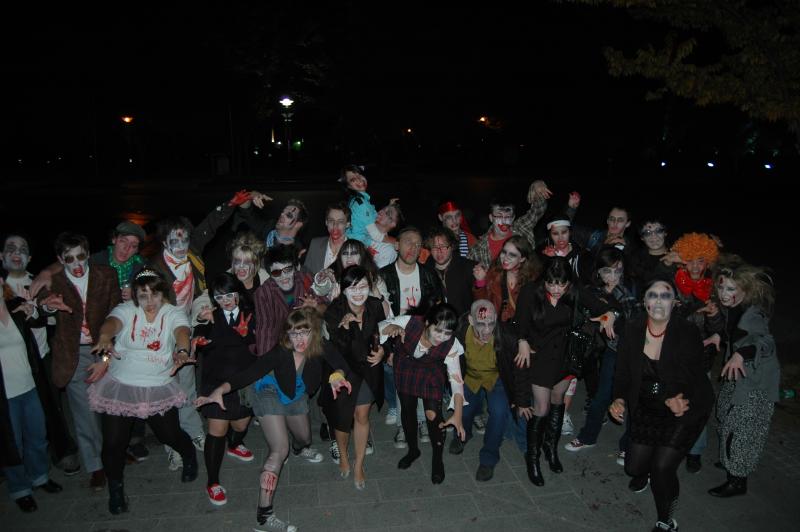 Hongdae may well be the perfect place for Halloween in Korea. The scene is already set – clubs and bars are open until 6am, and the locals come dressed and prepared to stay out late. 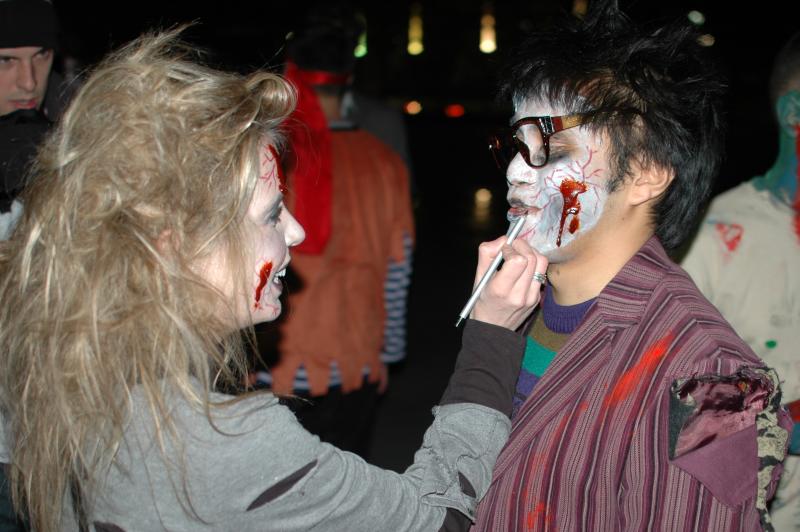 Hongdae may well be the perfect place for Halloween in Korea. The scene is already set – clubs and bars are open until 6am, and the locals come dressed and prepared to stay out late.

The Lady in Red and I did not start in Hongdae, however. Instead, we met up at Seoul Forest to participate in the Seoul Zombie Walk: 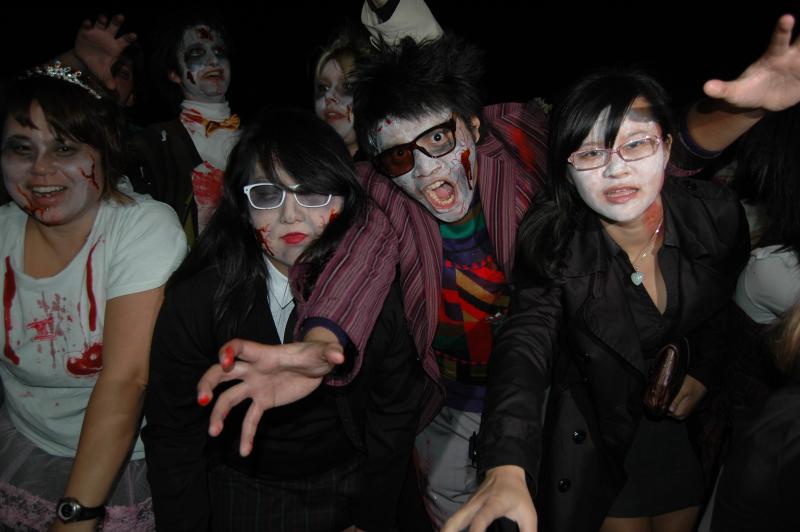 The first of its kind in Seoul (to my admittedly imperfect knowledge), the overwhelming majority were fellow waygooks / foreigners, but more than a few locals came out for a good scaring time. 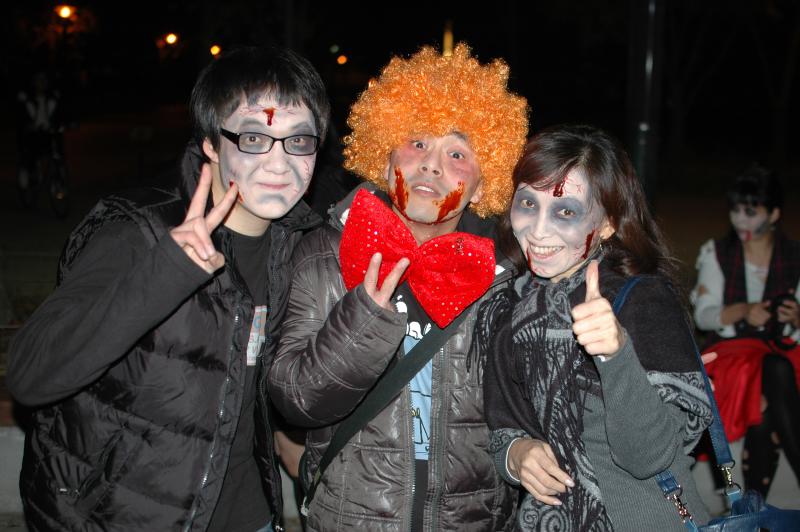 After scaring the few locals around the dark park on a Saturday night, the dozens-strong group got on the subway – even the undead had to carry a T-money card: 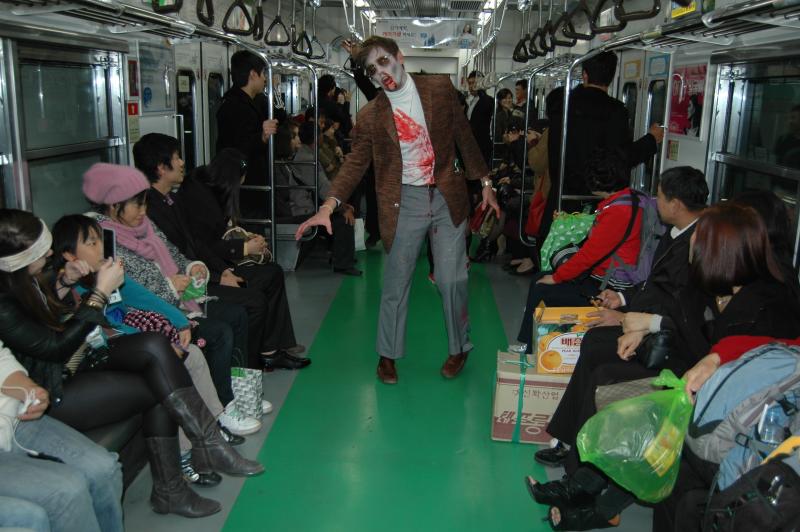 Starting at one end of the train, the zombie group called for 뇌 (noe, or BRAINS!) and generally groaned to the delight – and occasional scream – of the crowd. That more people laughed and reached for their cameras than screamed in fright told me the crowd enjoyed themselves. 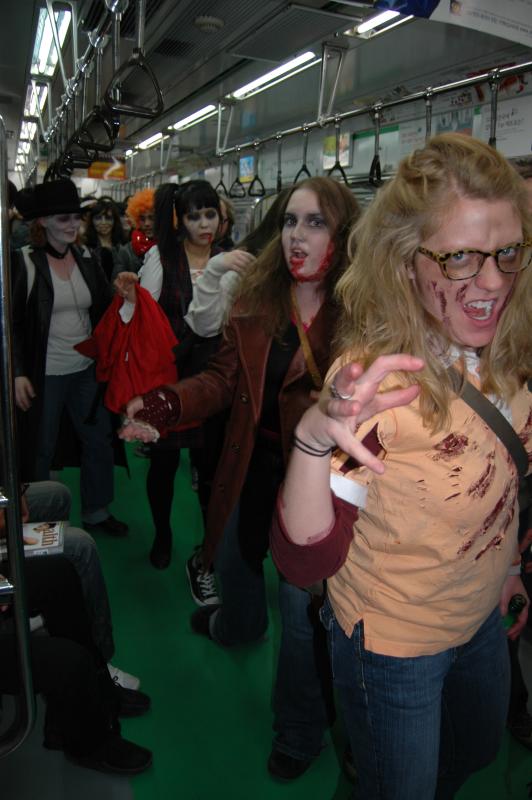 The subway ride was not without drama, however. The group got off to scare a new train, and at some point one annoyed ajosshi called the cops on us. Seeing as how there was really nothing illegal about scaring people, wearing funny costumes, or generally being silly, the police asked the group to quiet down as we moved on.

Once arriving in Hongdae, the zombies found themselves in a position to be as weird as they wanted to be: 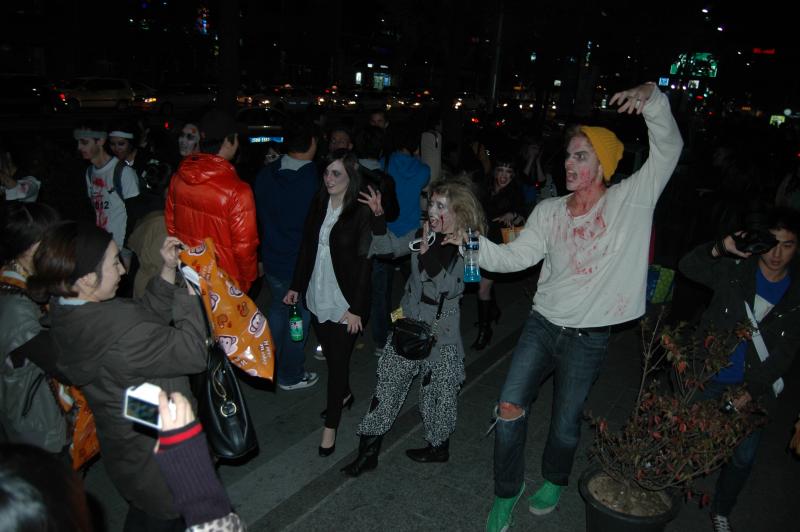 Again, the locals pulled out their cameras and smiled – as if this sort of thing happened all the time. A few clever zombies actually pulled off some good screams by blending in with the crowd, then turning around to show their outfit at the last minute. 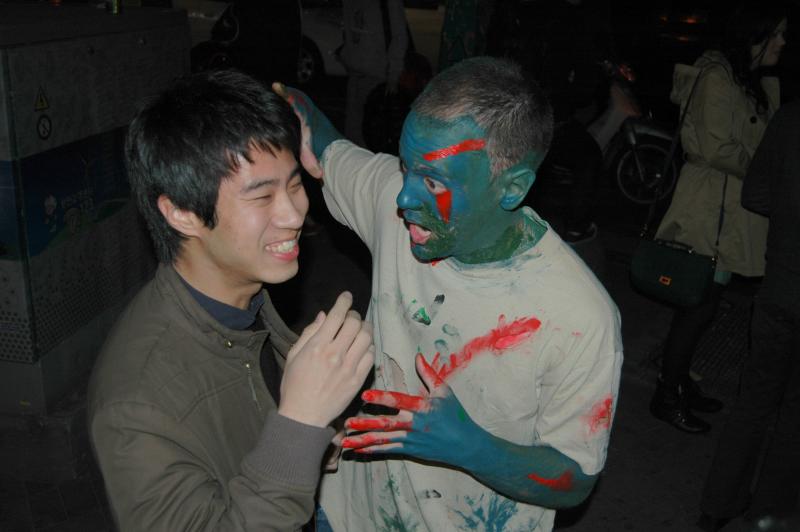 A few were a bit more direct in the classic ‘up close and personal’ way.

Since the group began to get a bit disorganized, the Lady in Red and I meandered down Hongdae’s streets a bit, and eventually found ourselves in Woody’s: 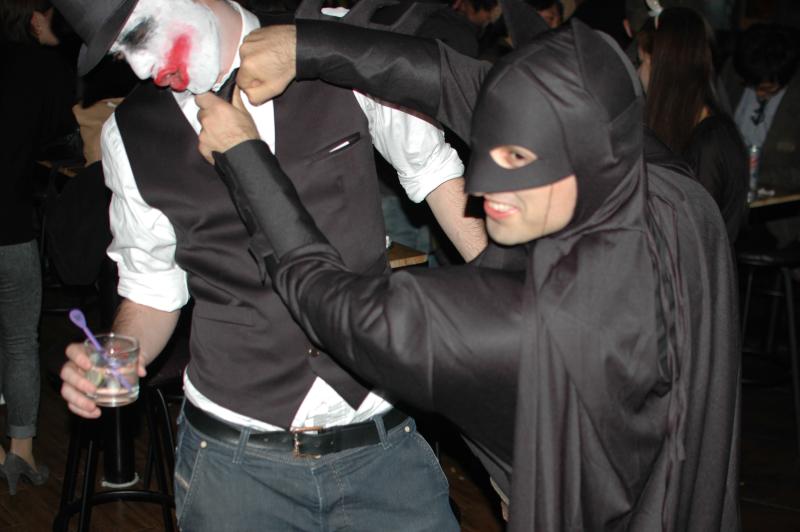 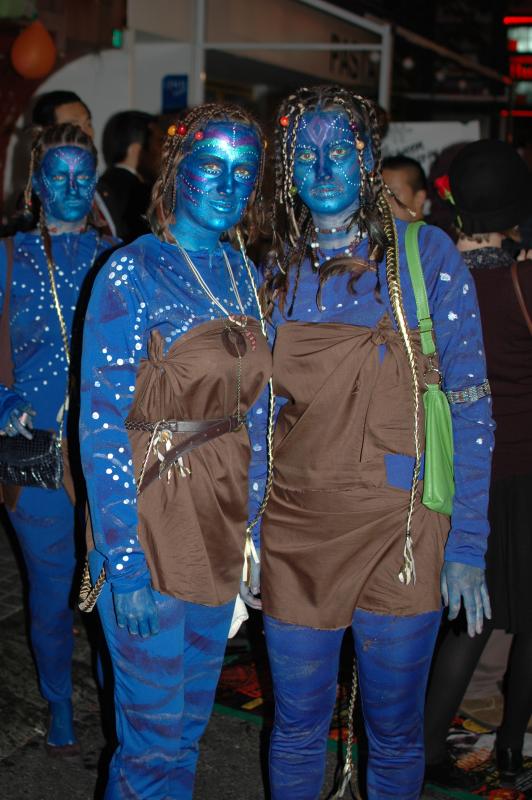 Back out on the streets of Hongdae, we came across these two Na’Vi from the movie Avatar… 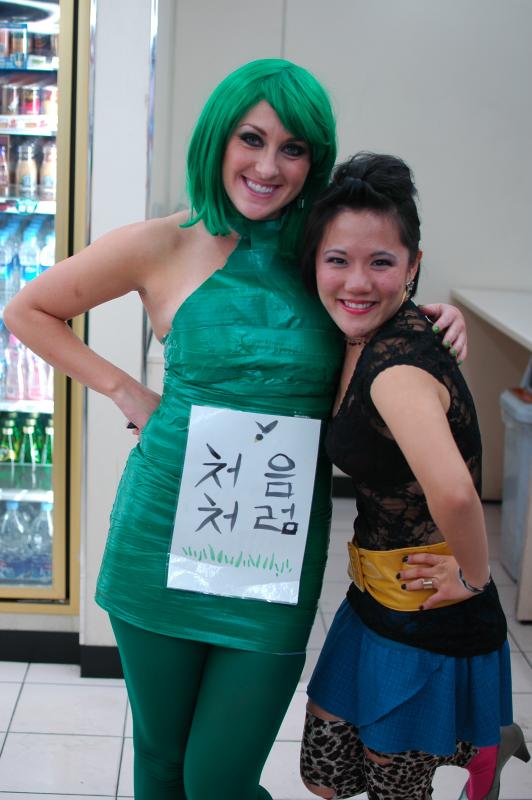 …and the girl we’ll just call the ‘Soju Girl’ – yes, that is the classic Korean green duct tape hard at work, by the way.

The Lady in Red stopped off for a hot dog down ‘Club Street’ – I’m sure it has a name – before we headed into FF for a show: 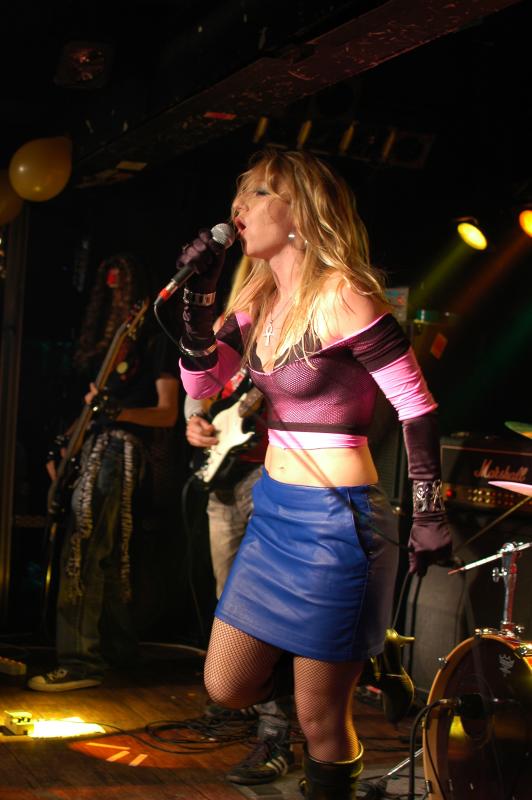 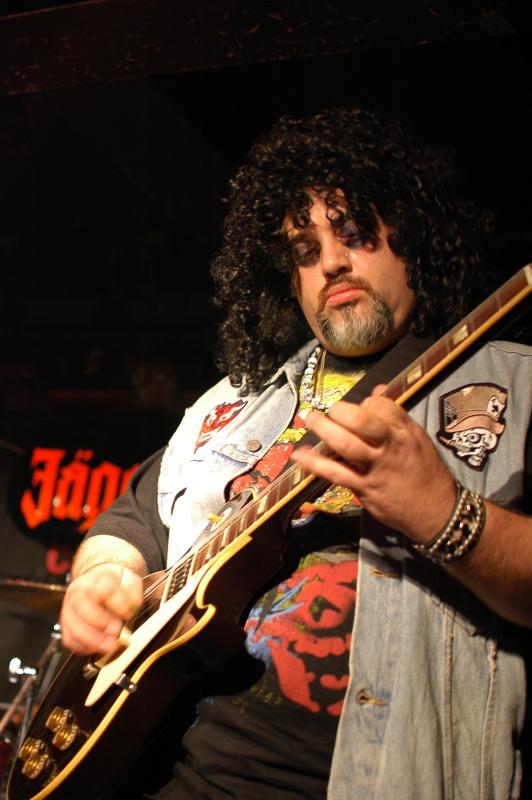 We ended up at Club FF for Shotgun Mascara, an 80’s glam rock band I interviewed for the Groove recently. They rocked the house

I’m sure Itaewon had some good Halloween parties, but Hongdae was hopping up and down the block, from the time we arrived to the time we stumbled into a love motel. The creativity of expats – and a few game Koreans – astounded me yet again.

If you find yourself in Seoul during Halloween, Hongdae is THE place to go. Bar none.

Do you have a question about Korea? I’m happy to answer, but do me a favor and search the blog archives first – there’s a good chance your question has already been answered. If it hasn’t, e-mail me at chrisinsouthkorea AT gmail DOT com.