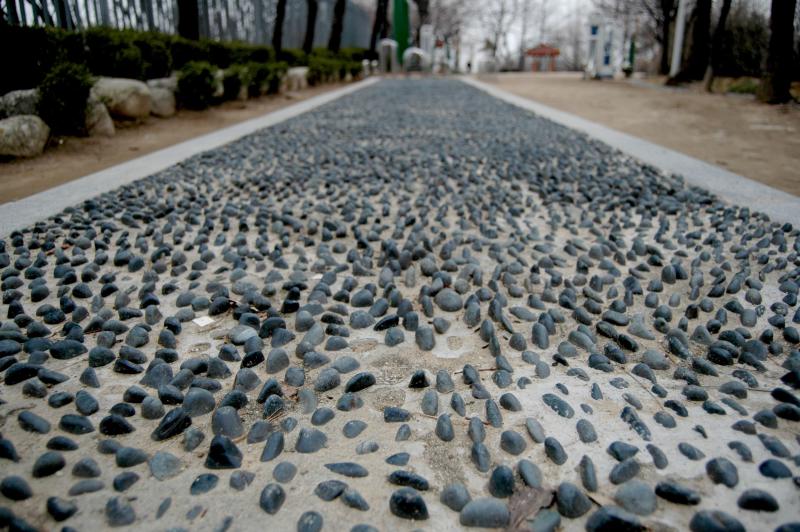 It’s fairly rare to have a park named after a person. It’s even rarer when that person is someone most Koreans couldn’t tell you about. Depending on how you transliterate 손기정 into English, it can be ‘Son Gi Jeong’, Son Ki Jeong’, ‘Son Gi Jung’, ‘Son Ki Jung’, or just ‘Songijeong’ as one of the signs put it. 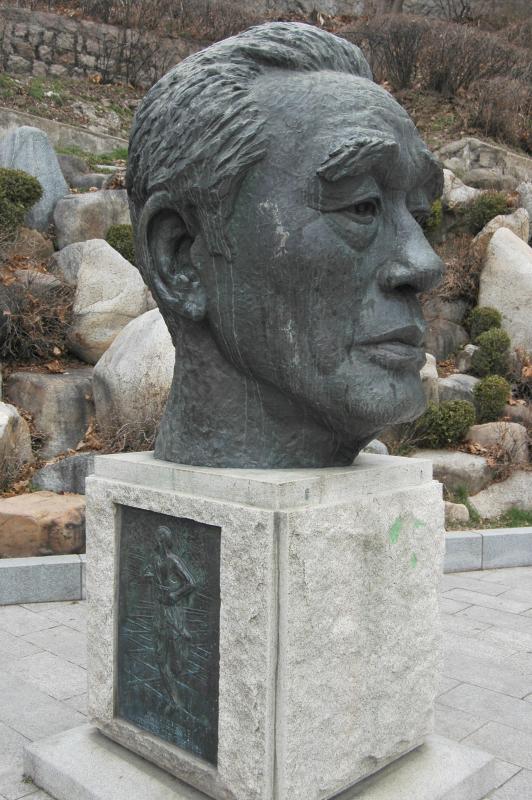 It’s fairly rare to have a park named after a person. It’s even rarer when that person is someone most Koreans couldn’t tell you about. Depending on how you transliterate 손기정 into English, it can be ‘Son Gi Jeong’, Son Ki Jeong’, ‘Son Gi Jung’, ‘Son Ki Jung’, or just ‘Songijeong’ as one of the signs put it.

The story is one worth remembering. As a Korean living in the Japanese colony of Korea, Son Gi Jeong was forced to compete for the country of Japan in the 1936 Olympics in Berlin where he won the marathon with a time of 2 hours, 29 minutes, and 19 seconds. His name, according to the hanja, was Son Kitei. The Wikipedia page on the man tells us:

As a nationalist, Sohn Kee-Chung refused to sign his name in Japanese and signed only his Korean name, and even sketched the shape of Korea beside his signatures. When interviewers asked him about his country, he would clarify that Korea was his mother country.

At the medal ceremony, Sohn was overcome with emotion and shed tears to see the flag of Japan raised and the Japanese national anthem played. Japan was officially credited with Sohn’s gold and Nam’s bronze in its 1936 Summer Olympics medal count.

One of Korea’s domestic newspapers, Dong-a Ilbo, published a photograph of Sohn at the medal ceremony, but had altered the image to remove the Japanese flag from Sohn’s uniform. This act so enraged the Japanese government that it imprisoned eight persons connected with the newspaper and suspended the publication’s operations for nine months.

He was awarded a laurel branch for his victory, which was later planted at Yangjeong Middle School, his alma mater [NOTE: the sign on-site says high school, not middle school]. The area has since been transformed into the park visited today. According to one official website, “Son Gi-jeong Laurel Tree measures approximately 15m in height, 55㎝ in diameter at chest height, and 72㎝ in root collar diameter. The tree crown extends 6.2m to the east, 4.4m to the west, 5.2m to the north, and 5.7m to the south. The laurel tree is in extraordinarily vigorous shape, especially considering its great age.” After passing away in 2002, he was honored as a Korean national hero. 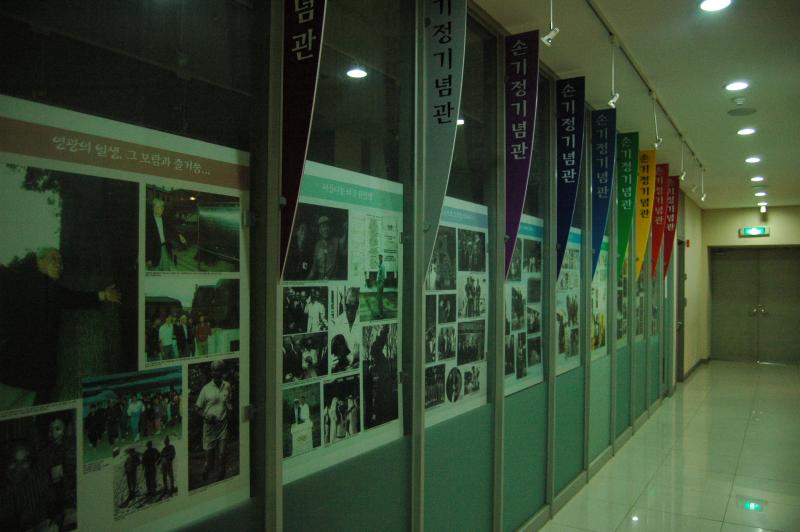 While not especially entertaining, the building (which looks like an old public school) holds a number of athletic facilities and a photo spread of the times. 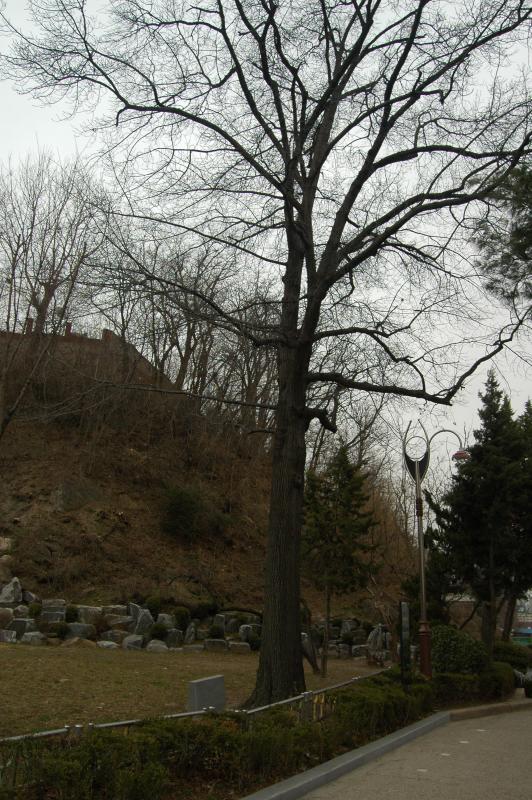 The infamous tree itself. A pin oak, originally grown from North America instead of the Mediterranean as others were before these Olympics. 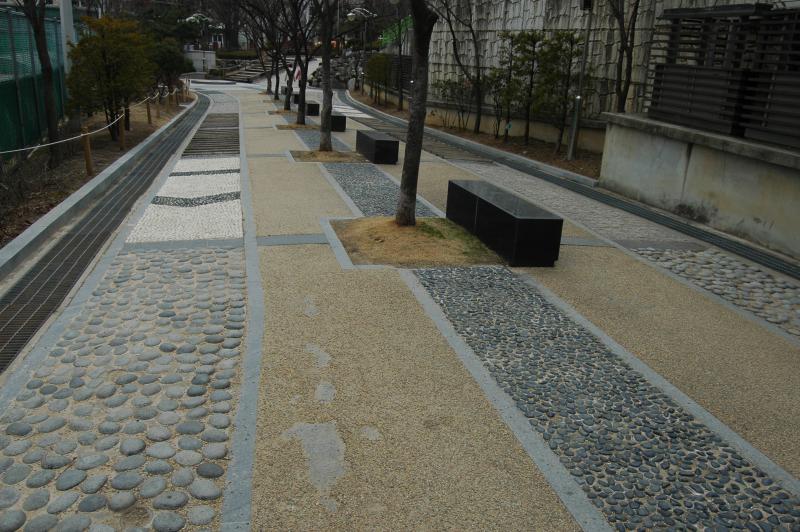 A barefoot path winds around the following statue and back again: 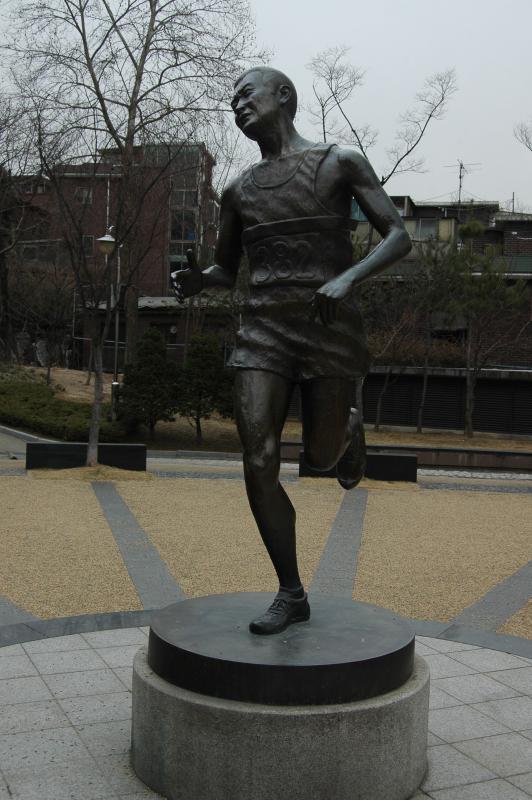 While it’s clear a fair amount of recognition is deserved, it’s less clear how many people know him. The people playing tennis or soccer at the local park seemed to care less about the name than the facilities, which are pretty nice for a public park. It’s not a tourist destination, although there is enough English around – come if you’re looking to play sports, or if you really enjoy public parks.

Directions to Son Gi Jeong Park: Take line 2 or 5 of the Seoul subway system to Chungjeongno station. Take exit 5 to street level, then take the first right into a group of apartments. Walk all the way to a T, then turn left. Follow the signs and road until you see the entrance.