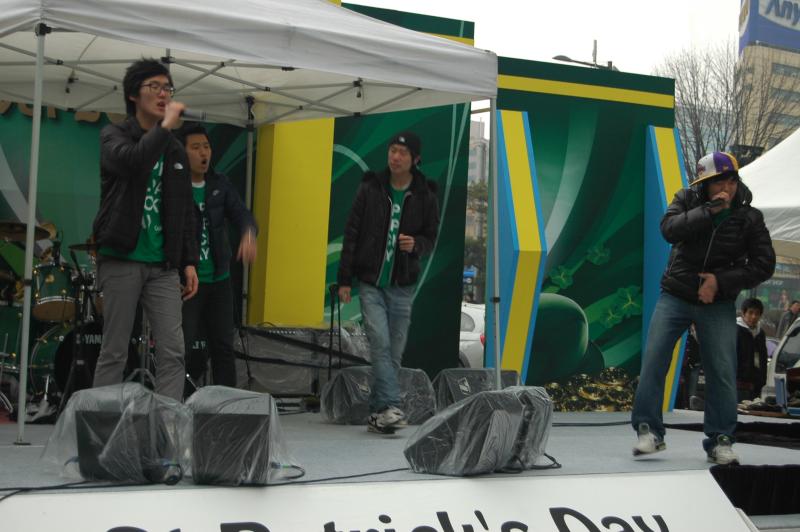 St. Paddy’s Day was celebrated at Cheonggyecheon in downtown Seoul – and what a party it was. Although the mixture of Korean hip-hop (above), Korean acapella, traditional Korean music (a pungmul band), and Irish music was a bit quirky, the crowd stayed – and remained noisy until the exodus to Gangnam. More on that in awhile. 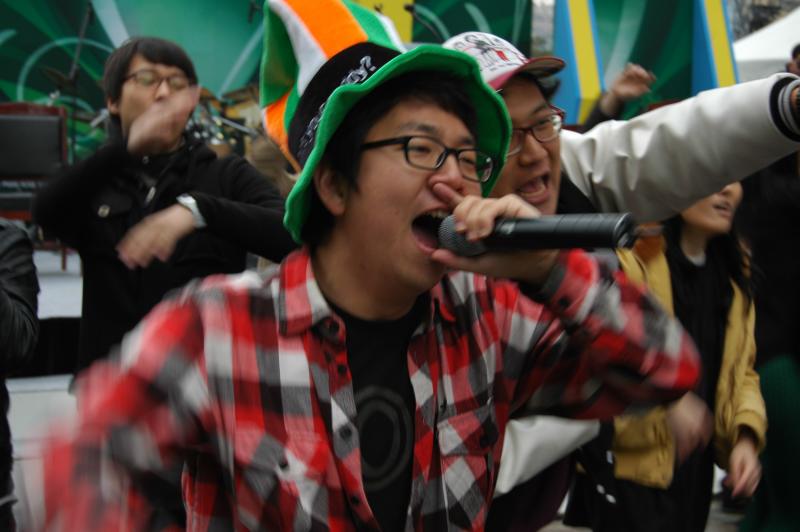 St. Paddy’s Day was celebrated at Cheonggyecheon in downtown Seoul – and what a party it was. Although the mixture of Korean hip-hop (above), Korean acapella, traditional Korean music (a pungmul band), and Irish music was a bit quirky, the crowd stayed – and remained noisy until the exodus to Gangnam. More on that in awhile.

Another Korean hip hop group that got the crowd on their feet? Yes, that’s Korean hip-hop at a St. Patrick’s Day event. Sort that one out – either way, it was quite fun. 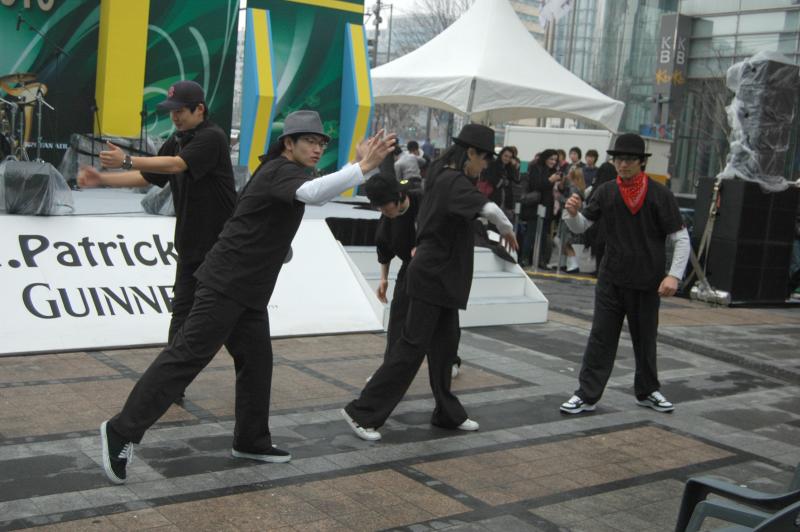 Let’s call it dance, with a miming sort of twist. 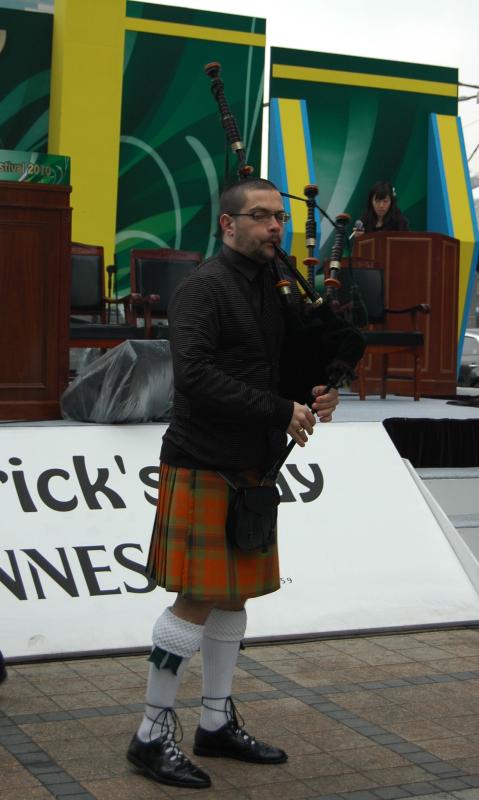 The sole bagpiper seen during the Irish event. He led the crowd at the start of the parade, which went alongside Cheonggyecheon for about a kilometer. 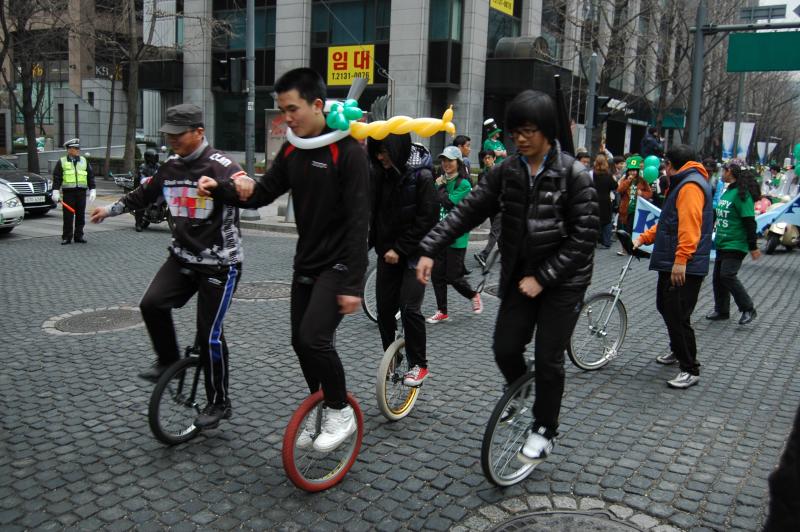 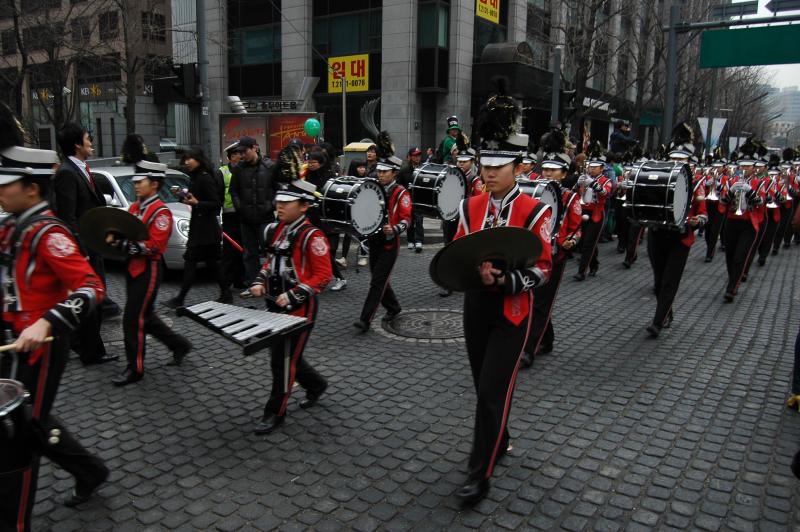 A couple of marching bands made it feel more like a July 4th party back in the US. 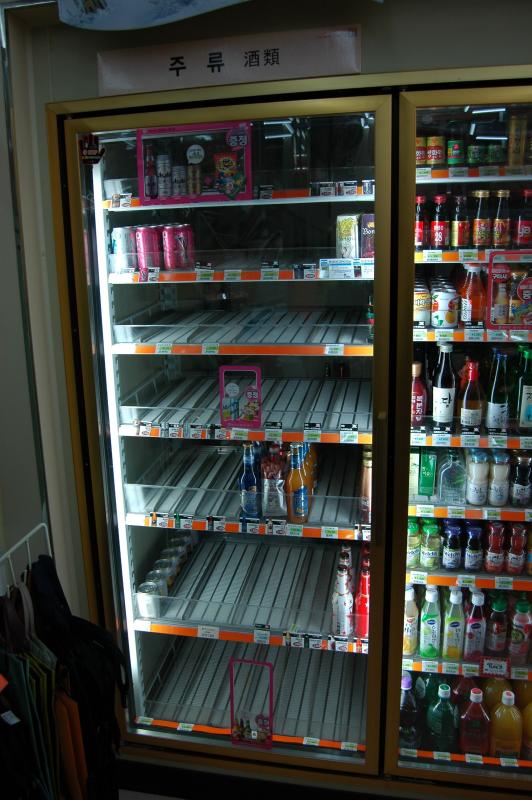 This picture was not altered in any way. Taken at 3:46pm, the 7-11 just meters away from the plaza was out of beer. The festivities kicked off about noon. A few other convenience stores weren’t hit quite as hard, although they were further away from the action. Another interesting observation: Koreans came out to party, but it was mostly the foreigners that drank. 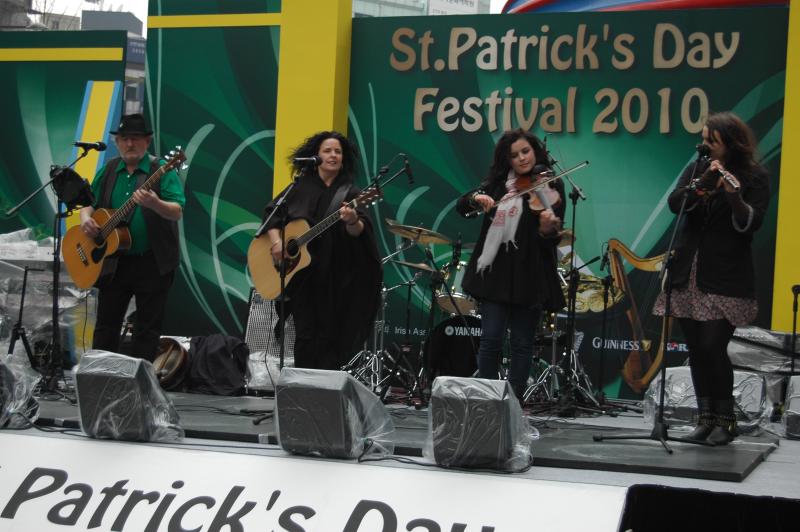 The Fee and Andrea Band – a wonderful Irish band well worth listening to throughout the year. 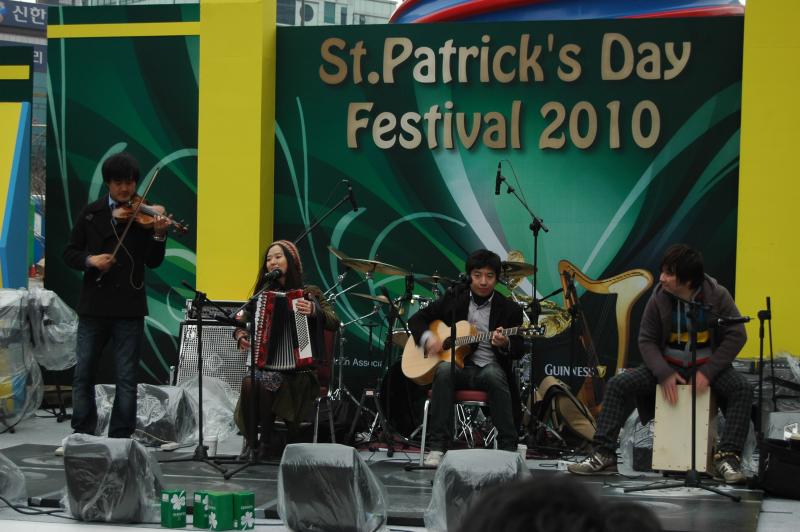 A Korean band named Bard – also playing Irish music, these guys got the crowd up and dancing: 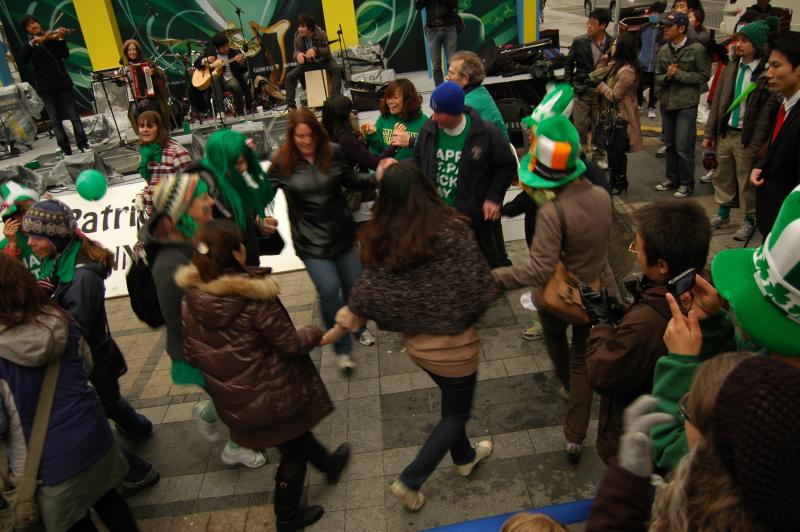 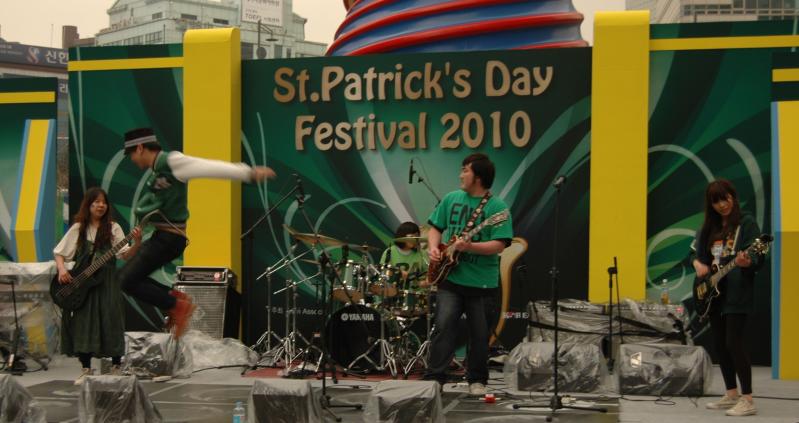 While there were several Korean university bands that played, Naked had some loud, hard rock that people continued to listen to. Who said St. Paddy’s Day was just about Irish music and drinking Guinness? 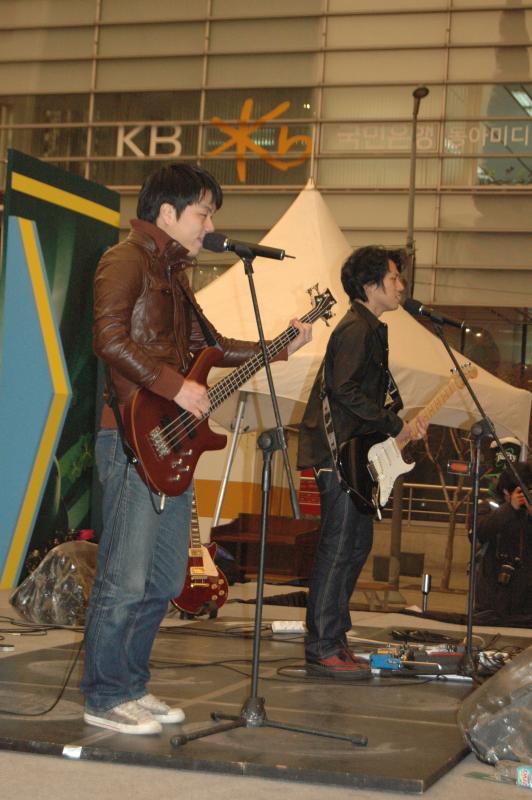 An excellent U2 tribute band – Deafening Street – the only act the crowd truly sang along to. It is U2, after all – how many other bands have sold 145 million records?

Perhaps a couple thousand people stayed until the last band finished up, then made their way to the Dublin Pub in Gangnam: 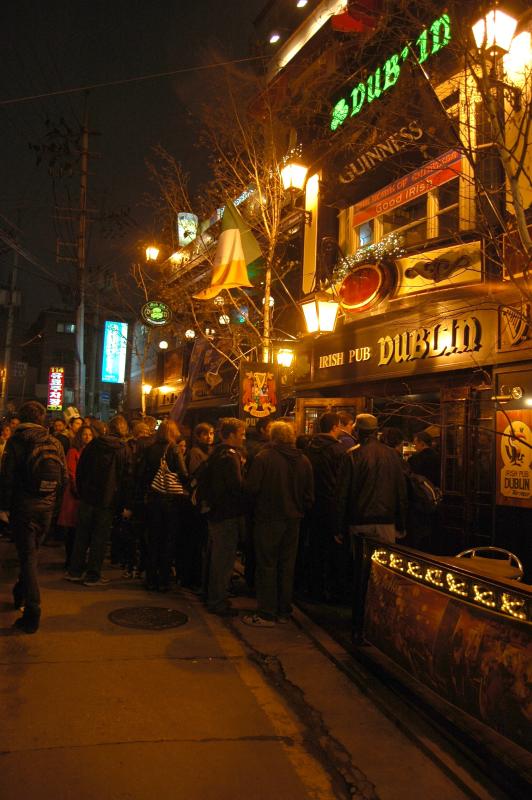 Scheduled to start at 7pm, dozens of foreigners were already lined up, ready to pay 50,000 won for an ‘all-you-can-eat, all-you-can-drink’ type of party. That turned out to be true – partially. Most people stood in line to get their first drink (a Guinness), or went for one of the shorter lines and got a Cass before heading up to the second floor for the food. A fairly decent spread of finger foods and dinner items filled several tables, although little if anything was Irish in nature. For 50,000 won? Seriously? No Irish stew? No soda bread? The fish and chips is more popular in modern times, so I’ll give it a pass. For the record, gimbap should not be on the menu of such an expensive ticket.

The crowd was huge – and perpetually in line. To the pub’s credit, Guinness taps were installed in several places to keep the crowd lubricated, while Cass taps were strategically placed elsewhere across the two floors.

Once the crowd had been fed, it was time for the entertainment to begin. A lone guitarist played a few original songs on stage, although clearly no one was listening. Enter the U2 tribute band: 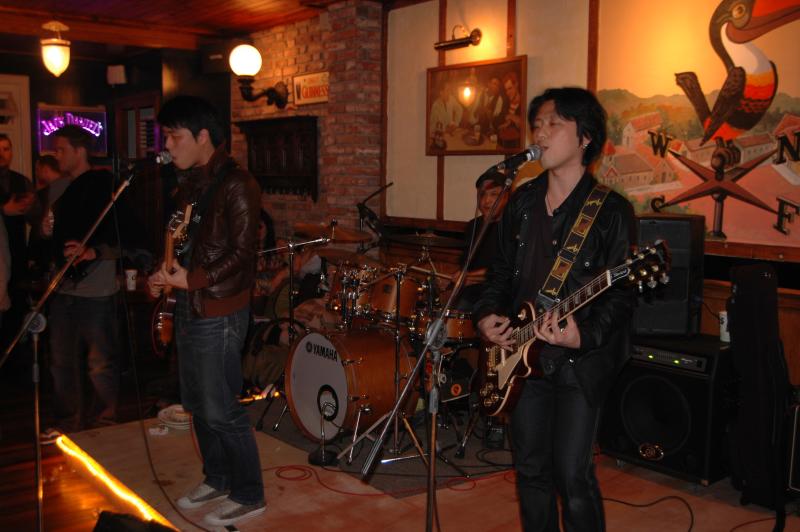 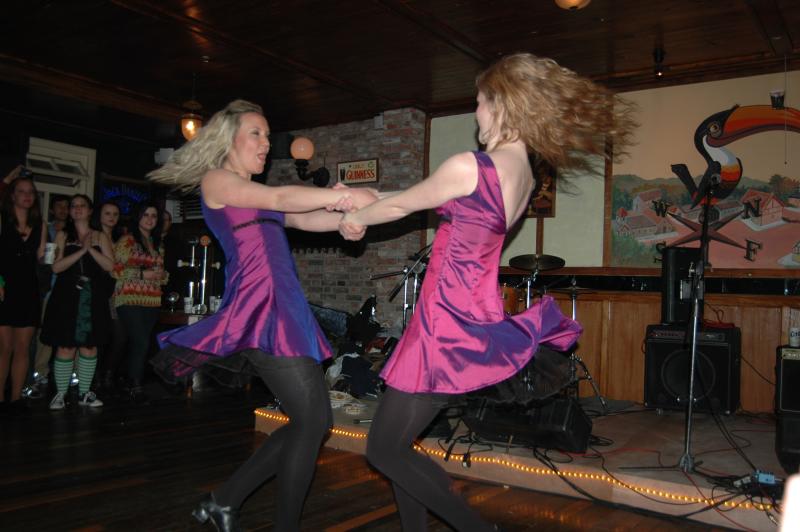 Two of the four Irish step dancers – aside from the twirling, their step action was quite together and surprisingly loud for an unamplified floor. 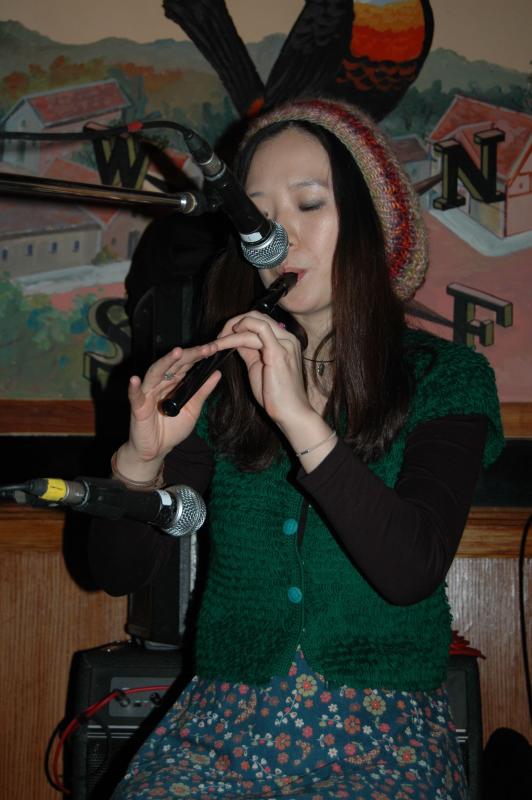 Bard performed again in the evening – the same lady playing the accordian also took a piccolo (recorder?) out to intro a few of their songs.

Somewhere near the end of the evening I was introduced to the gentleman from Korean Rum Diary – since he’s anonymous on his blog I’ll keep him that way here. We’ll have to catch up for another beverage in a slightly quieter environment – trying to understand and be understood is rather difficult with crowd noise and music in the background.

As a whole, the Irish Association of Korea deserves a lot of compliments and credits – the Cheonggyecheon part of the festival went almost flawlessly. The music was excellent, the giving away of free Guinness was quite popular, and the souvenirs were nice. The parade was entertaining, with enough going on in English (to keep fellow foreigners in the loop) and Korean (to keep the locals in the loop). For next year, I’d love to see some food / drink vendors with the capacity to serve the sort of crowds we saw. Obviously there’s a limited space in the Cheonggyecheon area, but I’m sure something could be arranged. The tribute to the Irish soldiers that fought in the Korean war was excellent – and I’d love to see some more information about the holiday’s history (for both those that have forgotten it and those who never learned it in the first place).

As for the Dublin Pub part…? Well, the food and drink was good, once you got to it. The crowd was much the same that had been partying and drinking the afternoon away at Cheonggyecheon, although I suspect we lost most of the locals on the way. For next year, please consider hand stamps instead of small green stickers – mine came off within minutes of arriving, having been jostled by the crowd one too many times. The biggest complaint was the crowd – a cap on people in the establishment needs to be in place for next time. It shouldn’t take a half hour to get a Guinness.