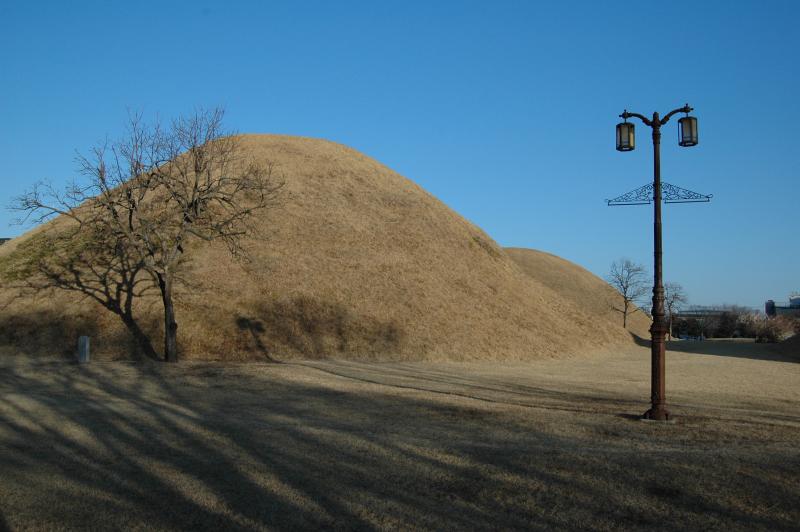 While in town to see Bulguksa and Seokguram Grotto, my girlfriend and I meandered through the downtown area of Gyeongju. The city is known as a ‘museum without walls’ for a reason. Many of the ancient displays are right there for the public to see – and there’s more to see than you’ll have time for. Since there’s quite a few sights within walking distance, we stored our stuff in a locker at the bus terminal and headed out.

While in town to see Bulguksa and Seokguram Grotto, my girlfriend and I meandered through the downtown area of Gyeongju. The city is known as a ‘museum without walls’ for a reason. Many of the ancient displays are right there for the public to see – and there’s more to see than you’ll have time for. Since there’s quite a few sights within walking distance, we stored our stuff in a locker at the bus terminal and headed out. 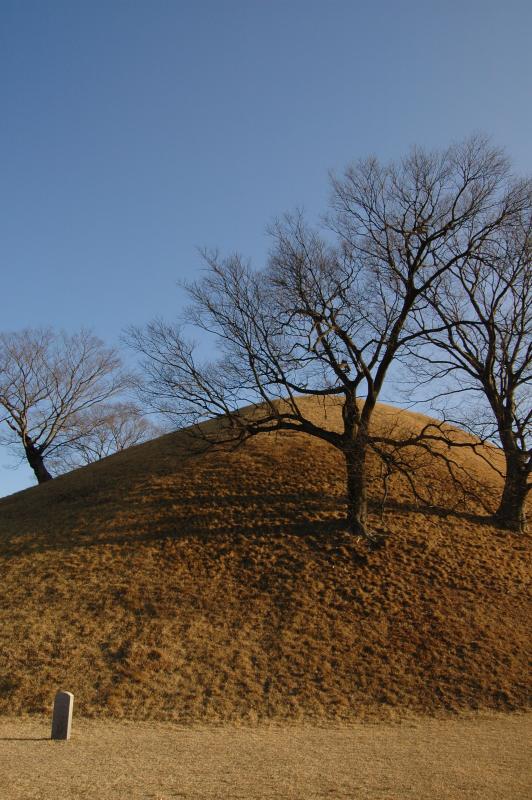 Our first stop is a grouping of tombs, open to the public and a short walk straight down the main road from the bus terminal. The area is called Noseo-dong on some maps, but are divided into two groups by the side road. The tombs themselves are also known as tumuli (or tumulus as a plural). Resist the temptation to go Italian and say too-myu-lee. 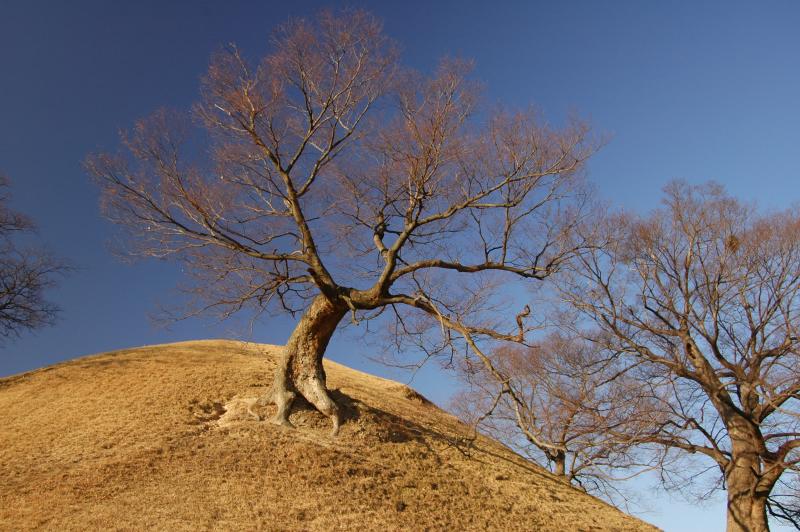 The sizable tree gives credence to the authenticity of the tomb. A number of tombs have a small (less than 50cm 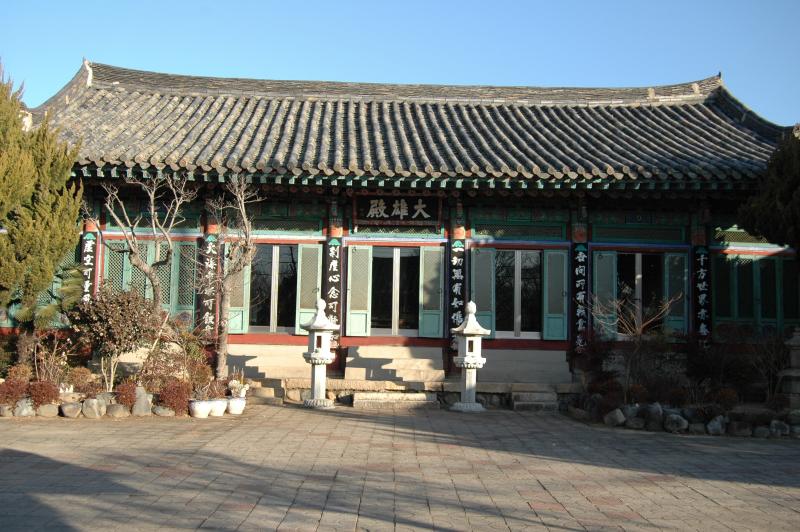 A little further down the road is Beopjangsa. While there was no English sign to tell the history, the Buddha statue was radiant as most of them are.
Crossing the street led us to Daeneungwon, although you won’t see any signs bearing that name unless you go through another entrance. Let’s call them the tombs behind the walls – and the ones you’ll have to pay to see. Also believed to be from the Silla dynasty, they were numbered 90-114 and 151-155 during the Japanese occupation. 1,500 won admission for adults won’t break the bank, so inside we went. 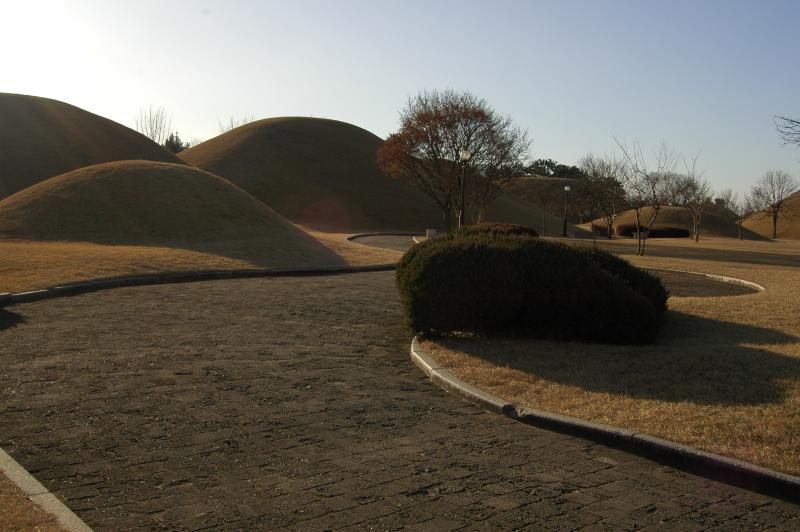 Mornings are perfect for tomb hunting. 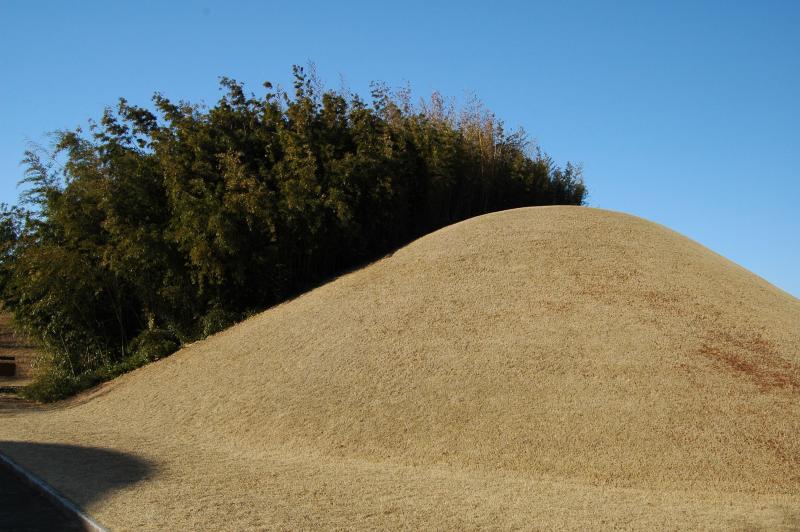 The only tomb to have bamboo growing on the side of it. 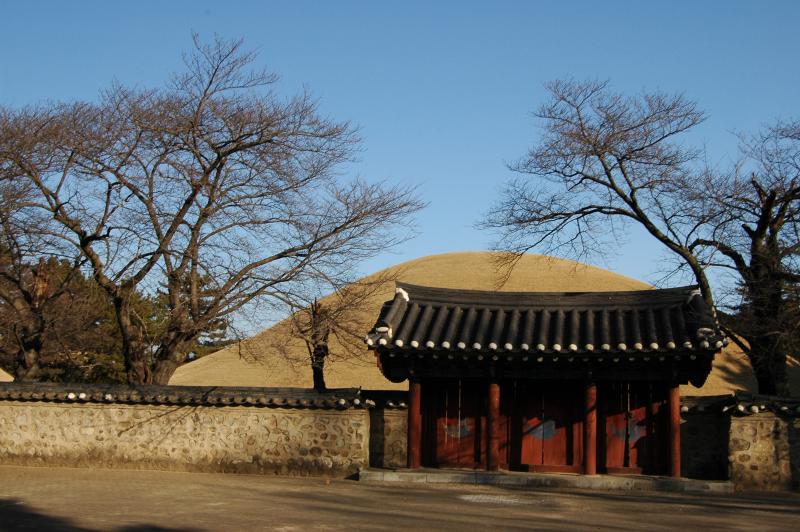 The Royal Tomb of King Michu, during the Silla Dynasty. Reigning from 262-284 A.D, Michu became the first king from the Gim / Kim clan. The tomb’s size is one indication of the buried’s status – this is one of the largest in the park. 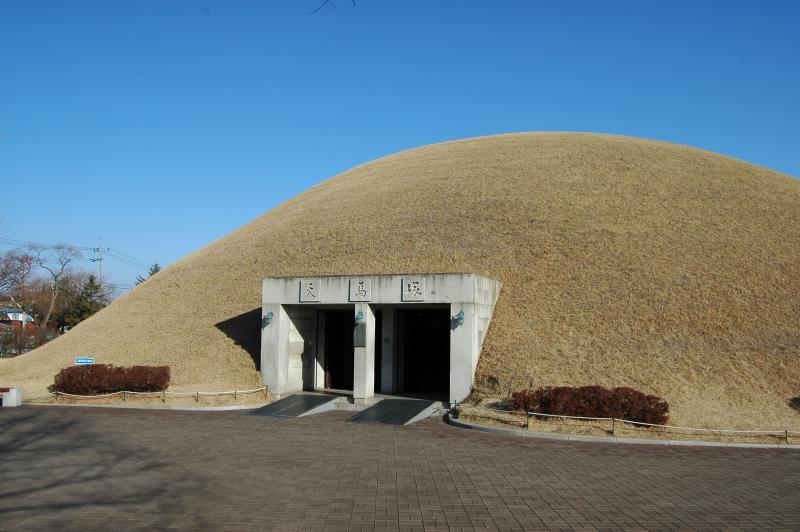 The only tomb open to the public, Cheonmachong (Heavenly Horse Tomb). When even the official sign admits it was ‘probably’ the tomb of a Silla king, it’s difficult to know for certain. When it was excavated in 1973, over 11,000 artifacts were found. They included a pair of saddle flaps painted with a flying horse and a gold crown, which led to the name. 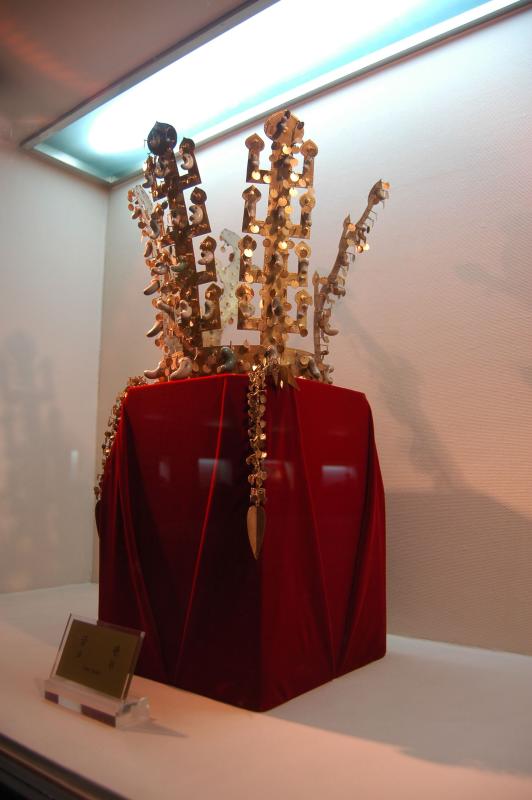 Along with the rest of the genuine artifacts, the real crown is located at Gyeongju National Museum. The replica is still pretty convincing, though.
Before long we exited out the other side and continued our tour of the ‘museum without walls’. This geographical area was a central part to the Silla capital city, so things are fairly close together. A number of people along the way offer bike rentals, which is an excellent way to see the sights in a shorter period of time. Don’t try it in the winter, though. 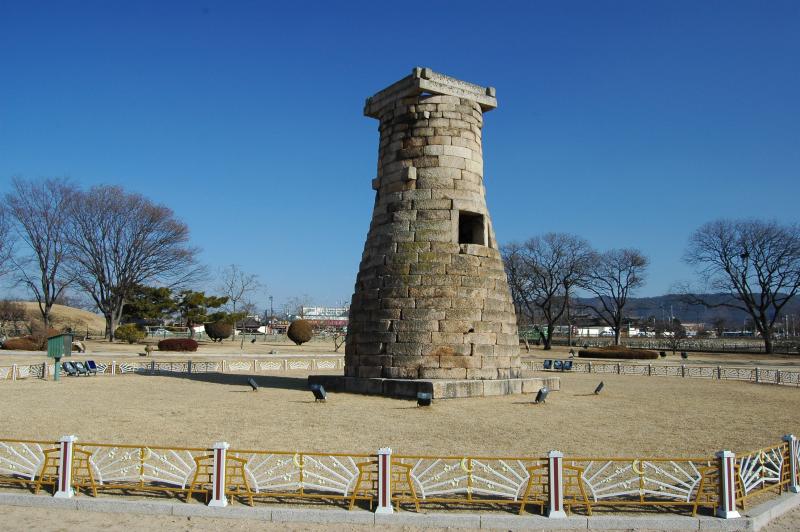 Cheomseongdae – supposedly the oldest astronomical observatory in East Asia. Originally built in the seventh century, the observer would climb through the square opening, then up to the opening at top. With 366 stones used in its construction, it was also supposedly a way at marking a year. It costs 500 won to get in, although views for free from outside the fence are nice as well. 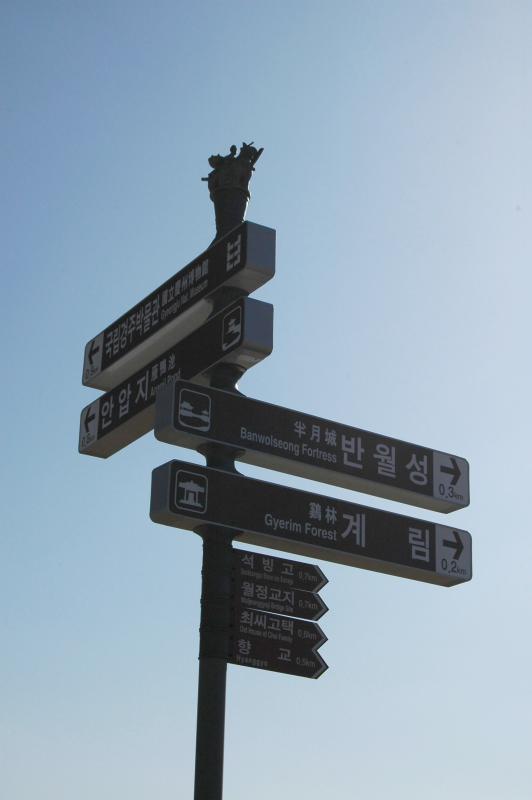 A surefire sign you’re in a tourist-heavy area – wide walkways, large signs, and lots of attractions. We followed right towards Banwolseong fortress – where the fortress was. Unlike other places in Korea that have been reconstructed and restored, Banwolseong is simply a place where a fortress was. Test your mental imagery skills if you like, or head towards the one part that has been restored: 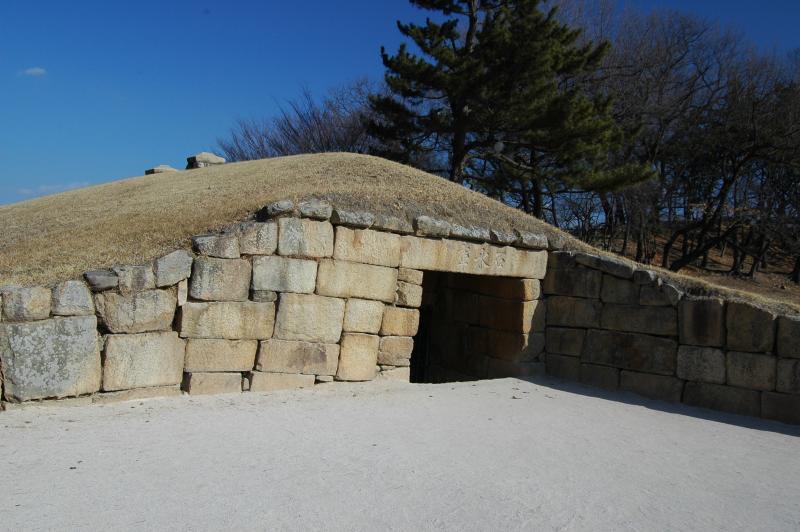 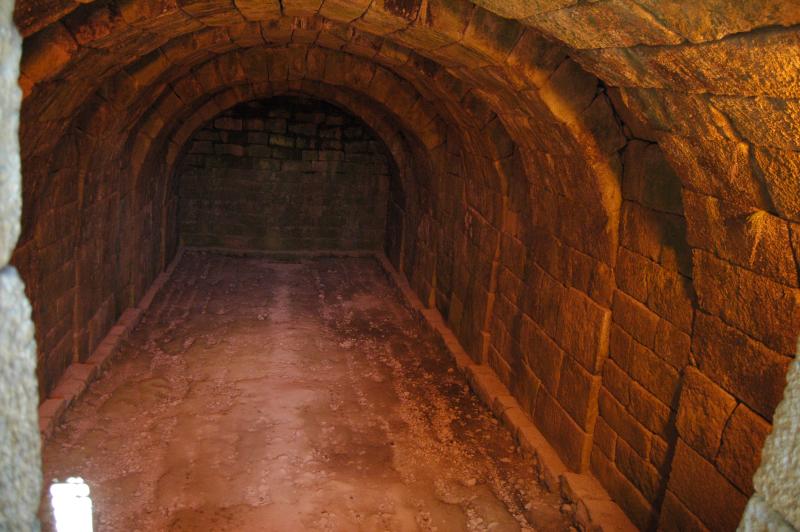 What is it?, you ask. It’s a seokbinggo, or an ice storage room. Of all the things to reconstruct, they chose a refrigerator. Some bars prevent tourists from stepping inside, but there’s really no reason to enter.
The farther you walk, the more there is to see. Seeing it all could easily take days – Beyond the fortress are the Gyeongju National Museum and even more tombs. Enjoy Gyeongju for the wide open spaces and the relative lack of Western restaurants – this is how Korea was meant to be seen.
Ratings (out of 5 taeguks):
Ease to arrive: