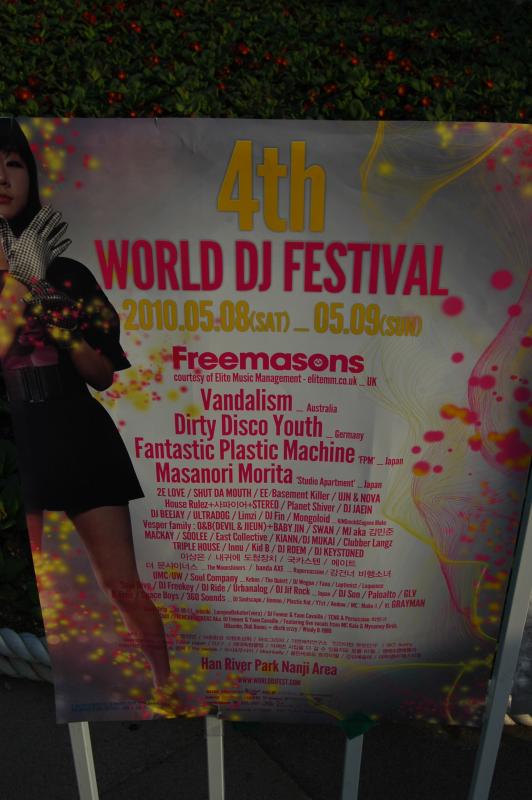 Disclosure: Chris in South Korea received two free ‘guest’ passes to the event courtesy of 10 Magazine, who was one of the event sponsors.

Disclosure: Chris in South Korea received two free ‘guest’ passes to the event courtesy of 10 Magazine, who was one of the event sponsors.

The World DJ Festival, first held in 2007 as part of the Hi Seoul Festival, offered a total of 16 hours of music to those who showed up at 2pm and stayed until the end of the show (6am Sunday morning). Filled with geeks, freaks, and other kinds of mischievous souls, the event is an example of an overpriced event (55,000 won at the door) seriously lacking in signage. While the essential facilities were present and adequate for the crowd, it takes more than bathrooms and beers to make an event work well.

Start with the ticket lines – at least one line was set up for ‘foreigners’, acknowledging that they made up a significant percentage of the crowd (around 35%-40% of the crowd, in this writer’s opinion). Buy your ticket, then get in another queue to go through a bag check. A thorough bag check, not unlike airport security. While I understand the need to make sure people aren’t sneaking in a 24-pack of beer, but did they really have to take the Lady in Red’s Ring Pop? My film canister of aspirin was confiscated (fine, they look like E, whatever), but why didn’t they take the Lady in Red’s pill case? Little things like signs saying what’s not allowed in would have been nice. The brochure did appear to give some sort of listing – in Korean – and there was no ability to hold your stuff until you leave. 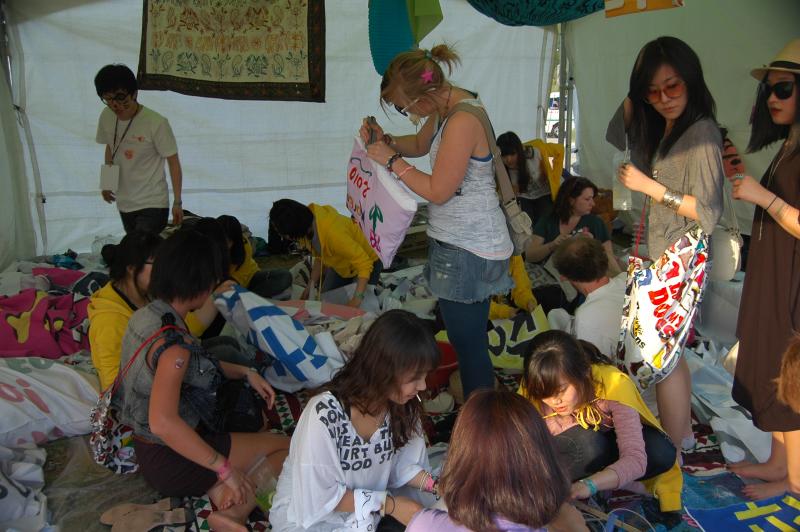 An opportunity to make your own seat cushion.

Begin walking around to explore the area – a large area to the right contained reasonably-priced drinks and food (pizza slice and coke for 5,000 won; cocktails on the Jager side from 5,000 won; 3,000 won for a draft of Miller, the only draft beer available). After finding a seat and taking in the vibe, we were immediately struck by the freaks and geeks that seemingly outnumbered the more normal looking people. No complaints there – this is a great opportunity to let loose and freak out until the sun rose. A few seemed more outlandish – some with angel wings, a Santa Claus costume, a tiger, and plenty of shredded or hippy outfits combined to make Hongdae look like an Amish get-together. Again, no complaints. 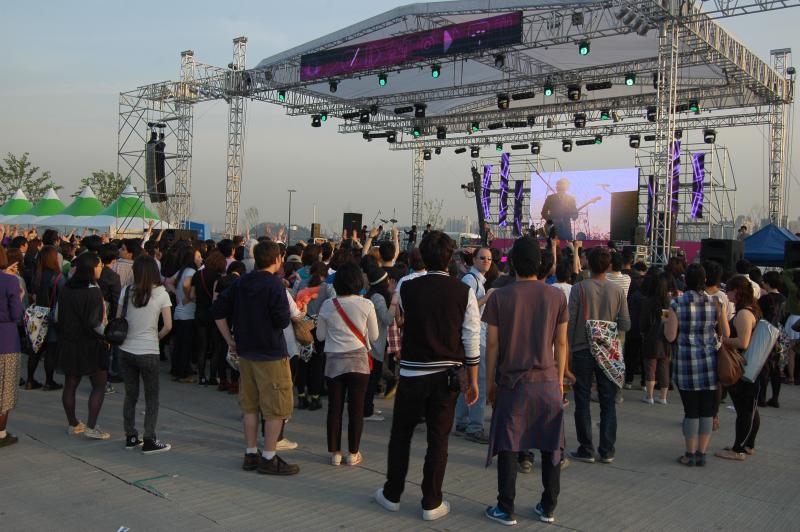 The main stage held the biggest and loudest acts, with more than enough people rocking the mosh pit, keeping a huge inflatable ball in the air, and otherwise rocking out. Sure, this might be the World DJ Festival, but the bands warmed up the crowd and few seemed to care. The Jager stage, HD Cigarette Lounge, and a Backstage stage all showed any number of DJ’s, mostly playing forgettable sets that served as background noise than a distinctive sound of their own. Dozens of sponsors made their presence known along the fringes, most giving away something small or keeping busy watching the show. The Doc Martens tent had the longest line, with a number of giveaways and DJ’s playing almost as loud as the main acts. 10 Magazine played a game or two of Twister and gave away magazines, while table soccer / foosball was at another nearby tent. 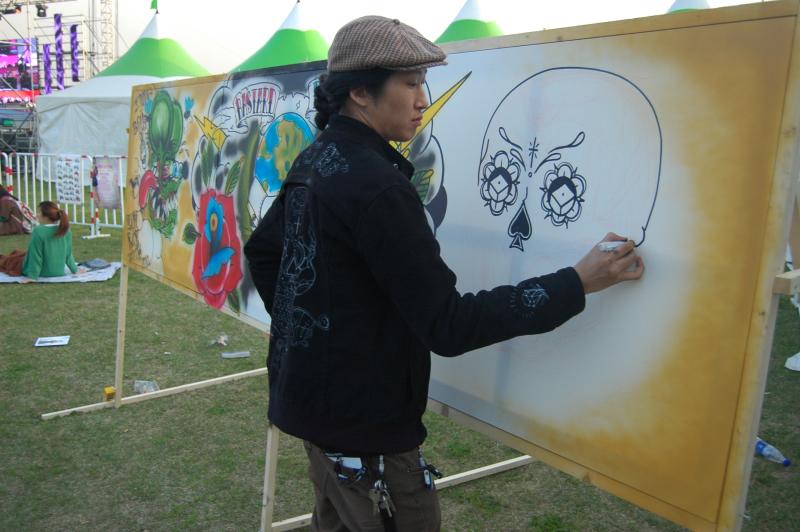 As it is at most festivals, the people-watching element is sometimes as interesting as the main events themselves. 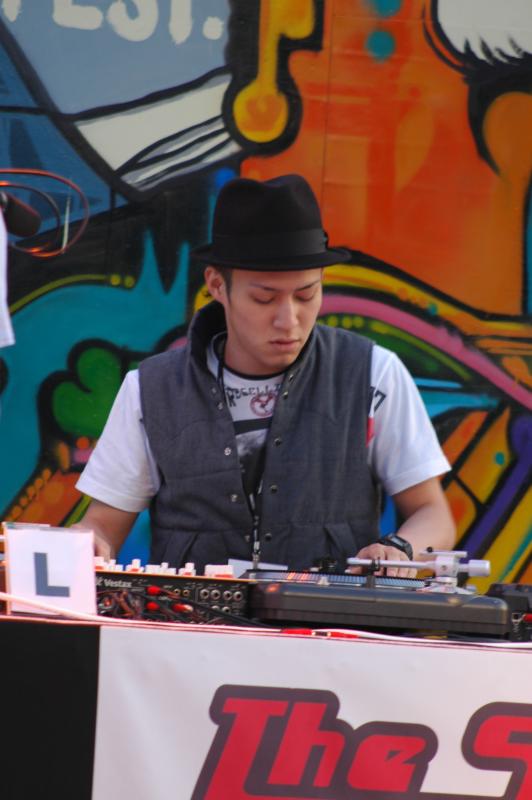 A DJ’ing sort of competition. Don’t ask who won – or who this guy is – as there was no English spoken from any stage during our time at the festival. 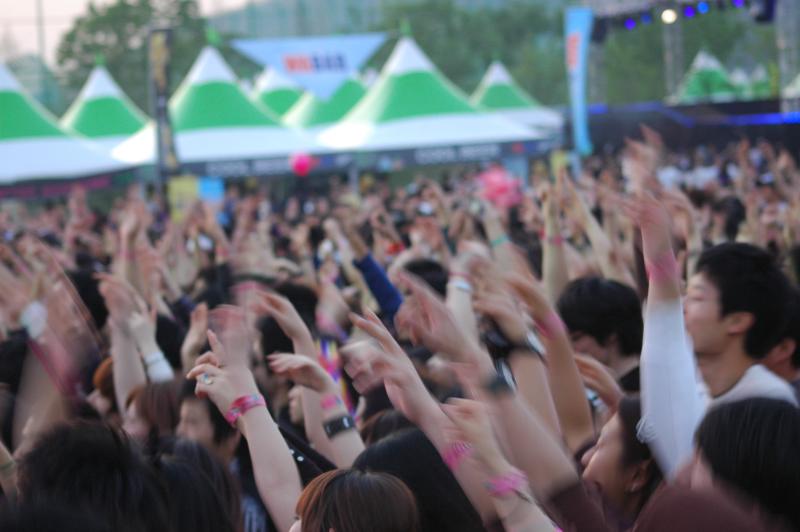 The crowd seemed managed and content with the higher decibels, able to party without many restrictions. 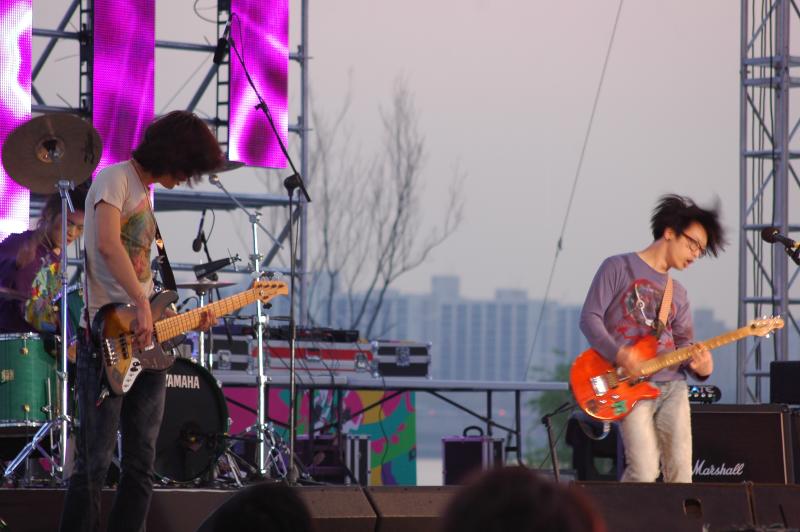 내귀에 도청장치 이상은. Again, nothing spoken in English, so this was pulled from the brochure. 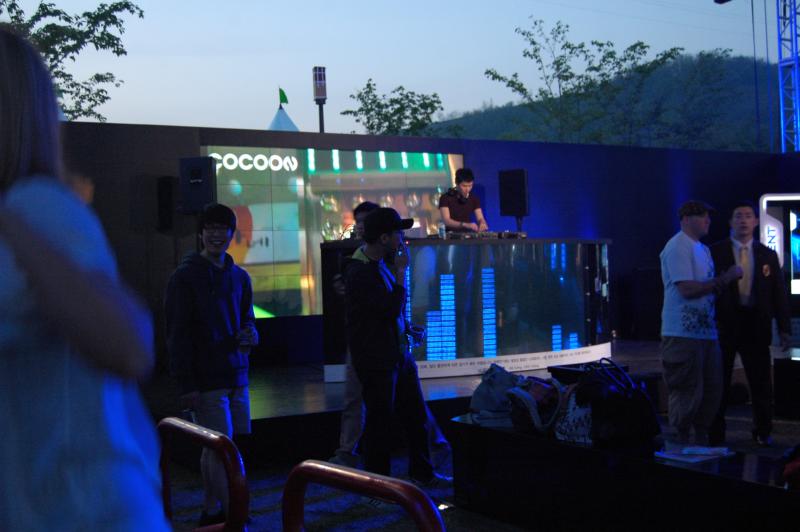 A DJ spinning some tunes inside the HD Cigarette Zone. A few nice additions included showing off a couple of iPads (my first chance to play with the device – they’re fun but won’t replace a laptop) along with a couple of arcade games. It seemed a bit ironic to put a dancing rhythm game inside the smoking zone, but it was probably the best place on the festival grounds to put it in. 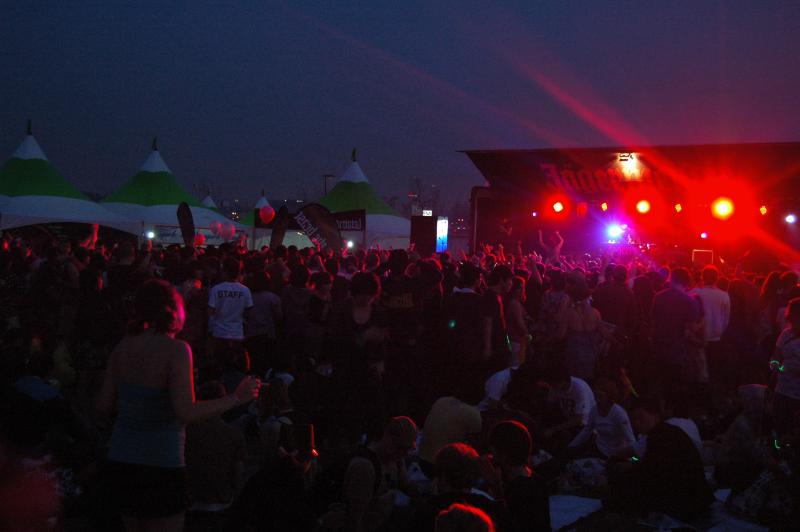 As the sun began to set, the crowd swelled and the lines got long – an expected issue with thousands of people all wanting a beer or a hot dog at the same time. Most people seemed to settle into one zone or another, content to hear what they could or simply to stay close to friends.

The biggest complaint of the night came as we tried to leave. A shuttle bus getting people from the subway to the park was supposed to be somewhere in the vicinity – apparently, whoever was in charge of putting up signs was sick that day. There were ZERO signs on display once you began walking away from the festival. The map printed on the brochure was far from helpful – was this the main road or the side road that runs parallel? If you’re trying to find a bus at 2am after drinking, a few signs would be helpful. The fact that a shuttle bus service was provided is helpful – but making it impossible to find renders it useless.

That the Jager bar was sold out of Coke at 9pm (seriously?) was unexpected; overheard elsewhere was a couple arguing with staff about bringing in a blanket. This, of course, after hundreds had already entered with tarps or blankets to lay out. The 55,000 won (about $50) ticket did not buy you a camping spot, which was hundreds of meters away; most seemed content to sleep or lay under the stars instead. The security staff, some wearing suits with earwigs, seemed incongruous with the spirit of techno, rock, and hip-hop – but didn’t seem to interfere with the party. As a whole, there was plenty of loud music, plenty of beer, although enough quirks to give a concertgoer pause.