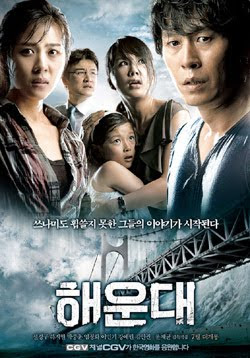 From the Chosun Ilbo:

From the Chosun Ilbo:

The Korean film industry is seething after a copy of the blockbuster “Haeundae” was found being illegally distributed over the internet last weekend, especially since the film had galvanized the industry by becoming the fifth Korean film ever to draw over 10 million viewers. Public calls for strong legal action against piracy are gaining support, but it might be too late to stop the spread of the bootleg overseas as it is already circulating on Chinese websites.

“Haeundae” was leaked online to a Korean file-sharing site on Saturday morning, according to CJ Entertainment, a major investor in the movie and its distributor. It spread quickly and by Saturday evening copies were available for download on most file-sharing sites, the company said. CJ had identified 24 sites where “Haeundae” was being circulated by Saturday, while police found over 160. It is estimated that the film has already been downloaded several hundred thousands times in Korea alone.

“Pirate DVDs of ‘Haeundae’ will be on the market in China by Tuesday, and you’ll be able to find them on the streets of Bangkok sometime this week,” said an official at CJ Entertainment. “Realistically, there is little we can do to fix the situation.”

Illegal trading of content over the internet is a crime subject to a maximum of five years in jail or W50 million fine (US$1=W1,249).

HA HA HA HA HA HA HA HA HA. Here we are talking about Koreans not liking piracy when they themselves are one of the leaders in the industry? It’s all too obvious in the Gangnam area, the Jongno area in downtown Seoul, and presumably other areas across the country. Consider that these places take a movie from the same online sources, download, burn, and sell in plain sight of untold thousands of passersby every day across the country. The movies are almost always American movies – heaven forbid Koreans pirate Korean movies! – and sold without fear of being caught or persecuted by the police. Still sound surprised at the irony? I’m not.

Until Korea cleans up its own act, there will be plenty of piracy, and plenty of people looking for the free download instead of paying to see it in theaters. Until the police actually start prosecuting people trying to sell what they don’t own, they’re 4 for 10,000 won along the main road in Gangnam.