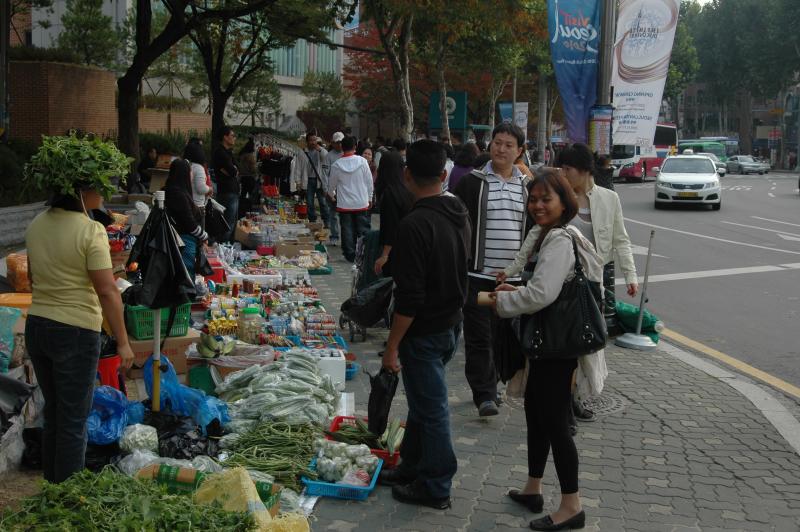 It’s a little disheartening to read “Seoul’s Filipino market to be cut in half” because of ‘complaints from local residents’. So says the Joongang Daily:

It’s a little disheartening to read “Seoul’s Filipino market to be cut in half” because of ‘complaints from local residents’. So says the Joongang Daily:

Seoul’s Jongno District Office said yesterday in an interview with the JoongAng Ilbo that the size of the market will soon be cut to half, partially because the stalls interfere with pedestrian and vehicle traffic and also because of complaints from residents nearby.

“We plan to expel unauthorized vendors, but will allow 15 shops that have been in business for the past 15 years to remain,” said Choe Seong-min, the director of the district’s construction management division. “We know the place is a meeting spot for Philippine nationals in Korea, but the stalls cannot be legalized and residents have voiced lots of complaints about the market.”

The stalls cannot be legalized? Mighty strong words there, you know – ‘cannot‘ seems to imply an impossibility or an unwillingness to do so. My guess is that it’s the latter – disguised as a couple trumped-up complaints that legitimize the forced removal of a market that’s been around longer than most things in Korea have. And don’t tell me that the numerous street vendors using dirty tarps and ancient wooden ‘tables’ are legal if the clean tables and kitchen-like setups are ‘illegal’. I’ve written about this forced relocation / move of the Filipino Market before, and I have really enjoyed my previous visits to the Filipino Market.

Let’s not forgot about the ‘shoe shine / repair booths’ – those ugly, gray bathroom-sized boxes found across Seoul. The hundreds or thousands of booths were once as temporary as the vendors they’re not trying to kick out. They started out illegal, arguably, and were legitimized with the construction of rentable, taxable property.

Recently, the district office had white lines painted on the marketplace grounds to demarcate the stalls, allowing four square meters (43 square feet) for each one.

Vendors who cross the line will face consequences, the district office said.

“District office officials said if we cross the designated line, we will lose some of our merchandise,” said Park Il-sun, the leader of Hanbihoe, an association of Philippine merchants in Korea.

So you’ve painted lines on the sidewalk for the illegal / not-legal vendors to follow? This is, of course, a country that considers sidewalks an extra lane of traffic, where stopping at a red light seems more like a suggestion than a requirement, and where the line for cars to stop is barely used. Either drivers’ eyes need to get checked again, or Jongno might want to step out of that glass house it’s been living in. Oh, and that bit about losing merchants’ merchandise? Has the concept of due process of law completely been forgotten about?

The market sprang up after a Filipino priest began conducting mass in Tagalog – the main spoken language in the Philippines – at Hyewha Cathedral in 1996, drawing a number of foreign nationals to the area. Today, the area is both a market and meeting place for Filipinos, Koreans and other expats.

The market is already half of its original size – it used to be 100 meters (328 feet) long. It will be cut in half again after the district’s plan is implemented.

Well done, Korea. You’ve managed to shoot yourself in the foot yet again. You’ve taken what could have been a nice attraction for tourists – and locals! – and made them feel like law-breakers taking up precious sidewalk space. Foreigners – who by law have almost no ability to get involved in politics – find themselves ‘not allowed’ to do something that has been deemed illegal, while locals do the same thing just around the corner with little worry about legality.