I am a nice guy through and through. I love talking to people and especially other photographers but once in a while something or someone will rub me the wrong way and it just makes my blood boil. Being photographers we tend to end up at the same locations as other photographers. This is usually a good thing. However, on this morning it was not. Perhaps it would have been different if it was not 5 am but who knows?

I am a nice guy through and through. I love talking to people and especially other photographers but once in a while something or someone will rub me the wrong way and it just makes my blood boil. Being photographers we tend to end up at the same locations as other photographers. This is usually a good thing. However, on this morning it was not. Perhaps it would have been different if it was not 5 am but who knows?

I got to Ulsan’s morning sunrise spot Daewanahm to catch the sunrise and work on an idea for a cinemagraph. When I got there, there were already photographers set up and I respect that. I picked my spot below some photographers, so that I would not get in their frame. Sadly, I accidently did… for a half second. “HEY!!!!!” was rudely shouted at me as I dared to place my tripod on a rock near the edge. I turned around to see who was shouting at me. I saw a middle-aged man annoyingly gesturing towards his lens and looking at me like I just ran over his dog.

I immediately moved out of the way but his rude gesture and attitude made my blood boil. There are so many other ways to have “asked” me to leave or temporarily get out of the way. However, this rude gesture made me feel like I was some form of lower being. Getting shouting at like a wandering animal that walked into the wrong yard is demeaning. Suffice to say that I was not amused and the man neither apologized or said a word after. Had he been a little bit more civil I would have been the one apologizing because afterall, I was in HIS shot.

I walked back a bit and asked “Is this spot ok?” He replied with another rude response “yeah yeah… ok ok [thumbs up]” I was livid. I moved closer and asked “how about here?” again he oozed with annoyance and rudeness. I walked away and found another suitable spot and started to cool down. I got the shots that I wanted and left. 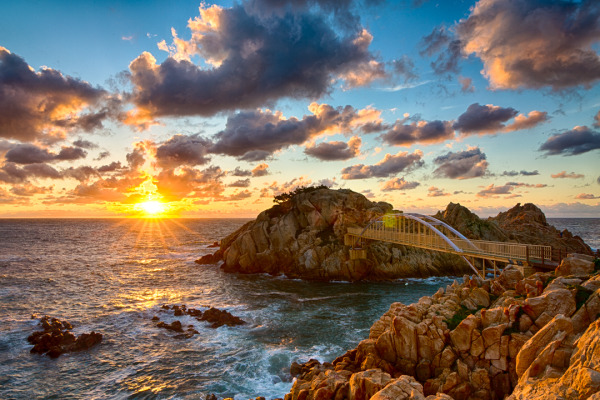 Why I was Angry

I was angry more at the way this man treated me. I have met hundred of great photographers and only a few times have I been treated this way. I made an honest mistake and felt that his words and actions conveyed a sense of egotistical superiority that can only come from someone who is taking the exact same shot from the exact same place as the rest of the people in his camera club. I was angry because I knew that if the tables were turned I would have been a lot more polite and I am sure that he would have ignored me and stayed in that spot anyway.

There is also the fact that in places like this it is always good to share the view. People are there to get a good shot and you do not own the spot. Had this guy been like all of the other photographers that I have met here, he would have got his shot and asked or gesture towards me when it was ok to for me to get mine. However, this guy wanted the whole area to himself and I found that to ridiculous.

It was also in the way that he spoke to me. There was no respect, just ego. I have had people move my gear, push in front and still I had respect enough to speak with a measure of etiquette.  I got angry because I felt that this guy could have spoken to me like a human being not a filthy animal trying to sneak a scrap of meat from the dinner table.

Why the Day was Ruined

The day was ruined not because of this douche bag but because of me. I let my anger cloud my judgement and creative flow. I have met hundreds of great kind and friendly photographers in this fine country but I let this one guy get the better of me and that was foolish of me. I should have shrugged it off after I heard “Hey!!!!” and just let him be. This man is not going to change and by lowering myself to his level then it makes a bad situation worse. No doubt from his side, I was rude and trying to “steal” his shot. I was the one who was in the wrong. However, the point is that we all get into each other’s shots a some point and all it takes is a little bit of politeness to win the day.

This day would have turned out differently had the man just said “Excuse me, could you move back a bit, you are in my shot?” Even better would be giving a nod when he was done and letting me grab a quick snap in that spot. There was no need for this situation and no need for me to get angry. However, my suggestion would be to speak your mind and stand up for yourself. Be polite but communicate your intention. If someone get in your shot, just politely ask them to move and then let them know when you are finished. Afterall, we all want great shots and this should not be a competition.