Before even setting foot in Australia, I had already planned out a mental ‘to-eat’ list in the weeks leading up to it. Most of the foods on it were Chinese or Malaysian, with a couple of pies thrown in for good measure. Some people eat to live. Some people live to eat. 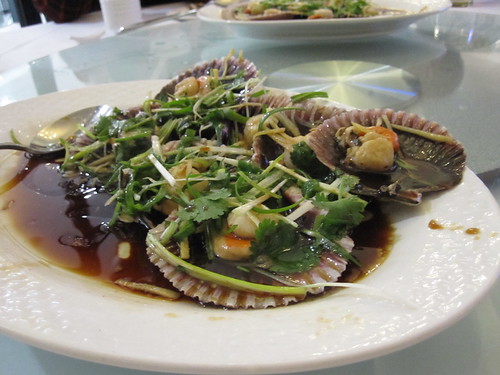 Before even setting foot in Australia, I had already planned out a mental ‘to-eat’ list in the weeks leading up to it. Most of the foods on it were Chinese or Malaysian, with a couple of pies thrown in for good measure. Some people eat to live. Some people live to eat.

If you’re wondering what’s happened to the photos, well I’ve taken some good advice from Chris in South Korea, who suggested I use Flickr to upload photos, and then link them to my blog. So that’s what I’ve heeded, and things are turning out well. Now the photos are clearer and bigger, and I also get an unlimited amount of photo space that I never need to pay for. Thanks Chris!
In the photo above are steamed scallops with ginger, soy, spring onion and coriander. It’s a simple recipe but never fails to impress. 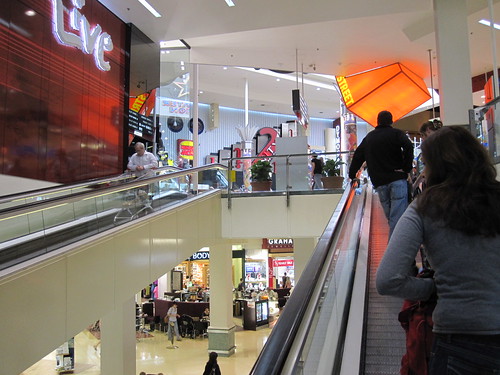 We went up to Marion Shopping Centre for lunch to visit my old workplace. Marion is owned by the richest man in Australia (Frank Lowy) through the Westfield brand, which is now the biggest operator of shopping malls in the world. My old boss told me that he came to eat in our restaurant on opening day.
The best thing about working in a shopping mall is that it’s convenient to pick things up on the way to work. 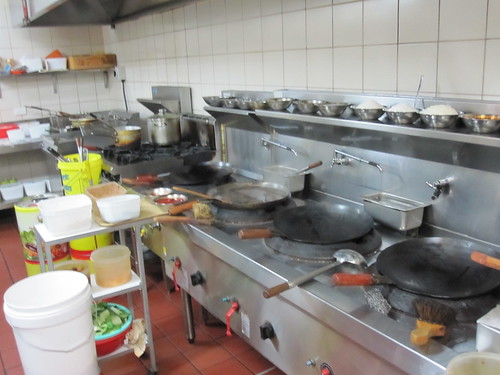 And here’s the kitchen space where I used to cook. Back in those days, I could cook three different dishes in those three woks, simultaneously. These days though, I’m limited to a little gas burner and a tin saucepan in our dormitory. Wok frying is a fun thing to learn, if you don’t mind getting burned every once in a while. 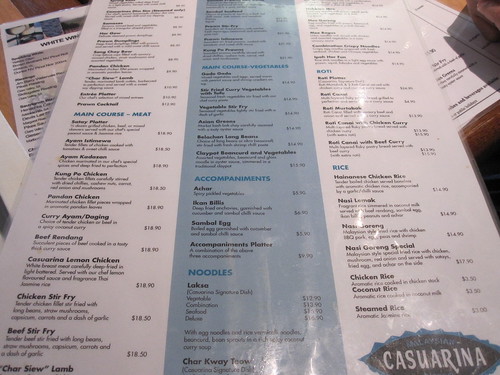 This is our updated menu. I can cook pretty much all of the dishes on this, and I’ve cooked some of them over a thousand times. Impressed yet? 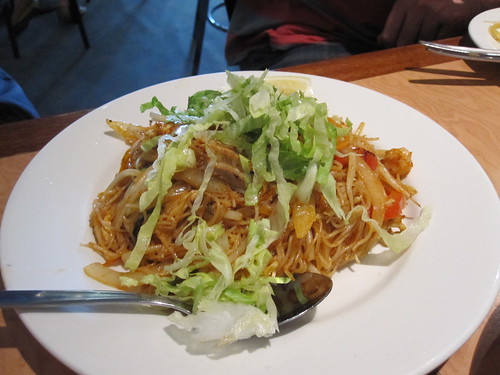 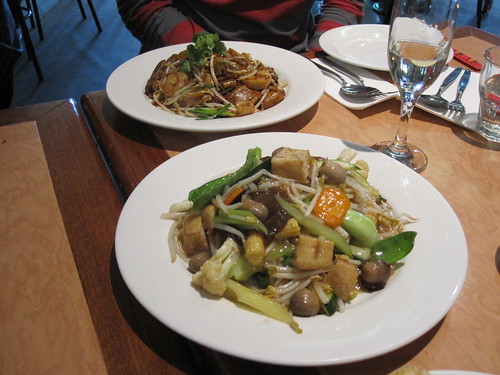 In the top photo is one of Casuarina’s Signature Dishes™, called Singapore Fried Noodles. Jimmy came up with that specific recipe, and it’s a little different from the authentic ones. The bottom photo has a char kway teow and a vegetable stir fry. 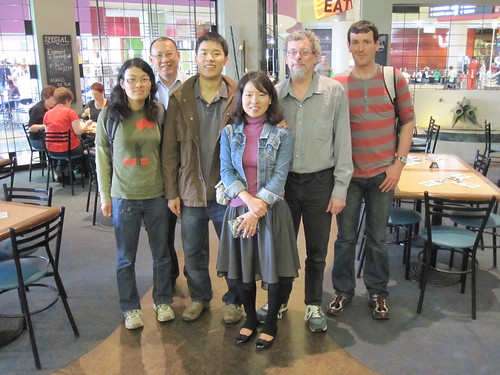 And here’s Heather and me with my sister, James Tan (the current manager of the restaurant), my dad and my brother. If you’re in Adelaide and heading to Marion, eat at the Casuarina Restaurant. It’s to the right of the cinema steps and is actually the largest traditional Malaysian restaurant in the southern hemisphere. 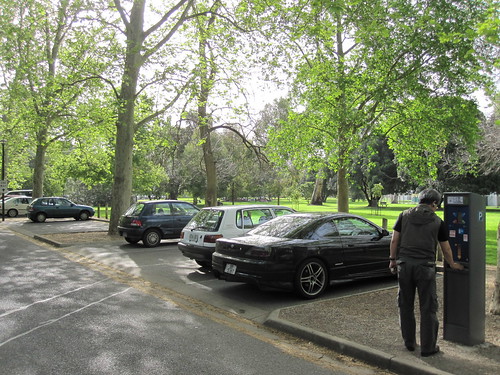 This is the carpark for the Adelaide Botanic Gardens. I used to park here during my undergraduate years at university, because it’s a lot cheaper than parking by the Torrens. On many a lazy afternoon, I would come back this way and relax in my car for a while, pondering the complexities of adolescent life before zooming off for my night shift.

Quiet moments of reflection can bring welcome pockets of clarity, if you do them right. 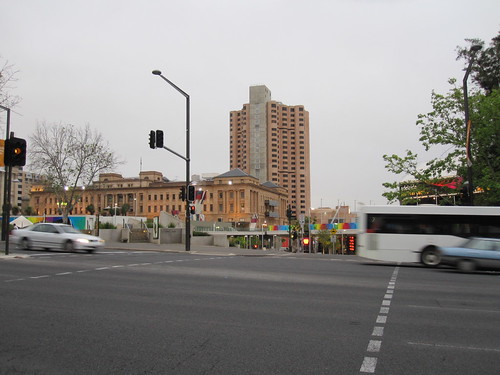 Adelaide is very small and very quiet, when compared to Seoul. The city centre is laughably cute, and has about the same number of buildings as my current university. Still, it’s one of the best places to grow up in and I wouldn’t have wanted to be anywhere else. 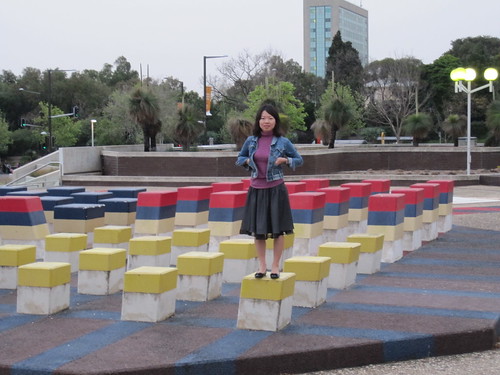 Here’s Heather standing on some blocks at the Festival Centre. It’s a part of the modern art installation they have there, and I’ve never worked out what it’s supposed to represent. I think they look a bit like the exhaust funnels of cruise ships. 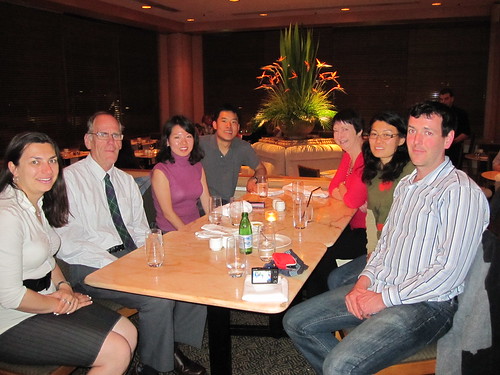 Mum invited us for dinner at the Adelaide Hyatt, which was incidentally opened by the same Peter who is running the L’Arc in Macau. Hyatt buffets are pretty good, and they get extra points for having fresh oysters. The best oysters in the world are from Tasmania and Coffin Bay.

In my opinion, anyway. 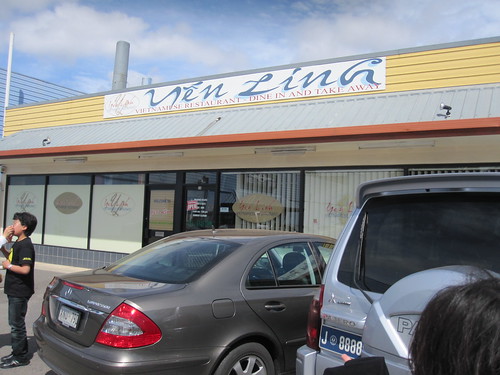 And there happens to be a very good Vietnamese beef noodle shop across from Regency TAFE, called the Yen Lin. I used to come here a lot after a long night drinking. 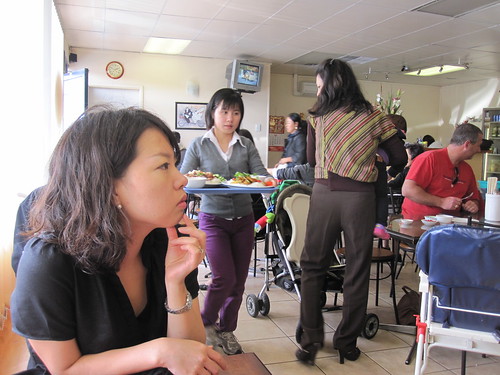 The restaurant is pretty busy these days, and like many Asian diners in Adelaide, the questionable service is more than made up for with delicious food. Waiters in these places will come up to you with a notepad and pen, and blurt out “WHAT you wan?” You tell them, and they go into the kitchen, having never made eye contact. You could have fluorescent green eyes and they’d never notice.
But sure enough, 5 minutes later a delicious bowl of steaming noodles comes out and you’re making a mental note of the restaurant’s location. 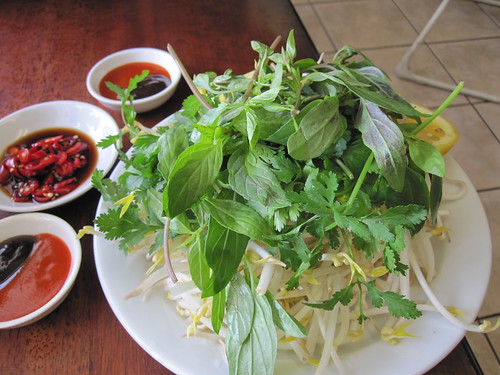 This is what beef noodles should be served with. Hoisin and Sriracha chilli sauce on the side, with copious quantities of Thai basil, lemon, beansprouts and coriander. At this point in time I will refrain from pointing out the numerous indictable offenses regularly committed by Korean beef noodle restaurants. 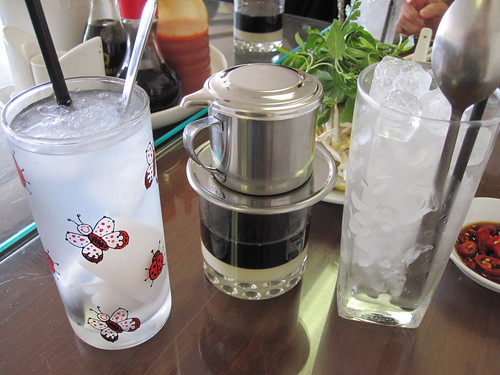 On the left is fresh coconut juice and in the middle is Vietnamese filter coffee. It’s quite strong and is served with a layer of condensed milk on the bottom. You stir it up and add it to the cup with ice in it. After a few of these, you’ll be resembling some sort of fusion between a meerkat and a hummingbird. 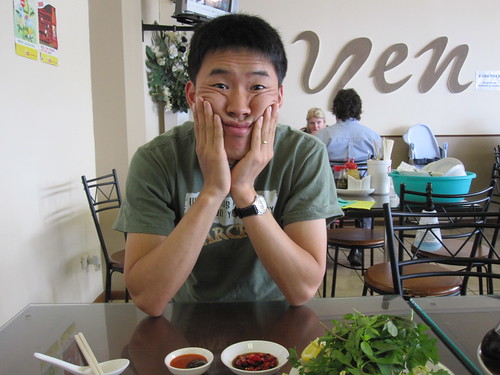 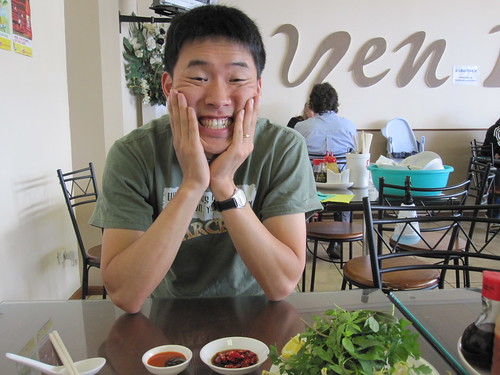 Here’s me, waiting for my beef noodles. Three years is a long time to wait.

See, I already poured my sauce in the sauce holder. 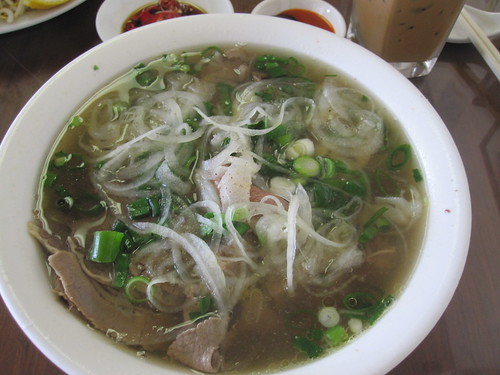 Combination beef noodles are called phở đặc biệt in Vietnamese. You need a couple of awkward diphthongs in there if you want to pronounce it properly, but most of us survive by using the word ‘fur’. It’s simple, pure and delicious.

And it should not have a side of kim chi. 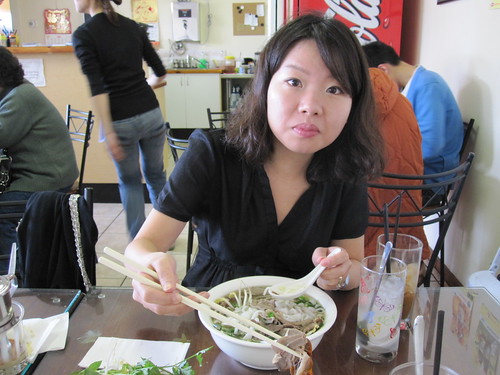 Heather thought the noodles were quite appetising. But what often happens in situations like these is that I hype something up way too much beforehand. So anything less than an out-of-body experience is going to disappoint. I really need to stop doing that. 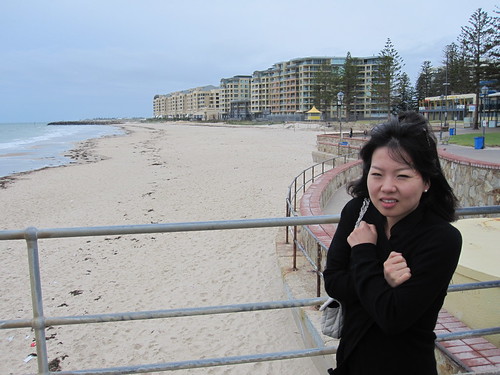 Another thing I hyped up a little too much was Adelaide’s nice weather. When we got to the beach, it was about 14 degrees C. 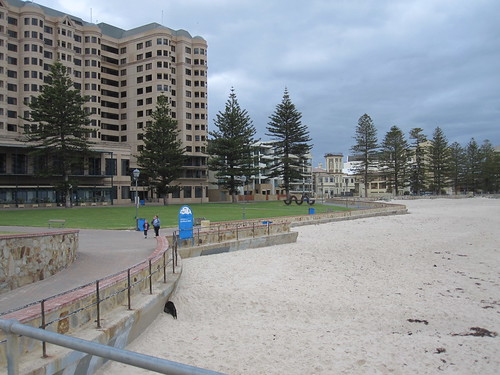 Glenelg beach is a nice place to visit in the warmer months. It’s also a focal point for New Year’s Eve celebrations, with fireworks and large crowds. There’s a tram service that goes from here to the city centre, and my uncle once had his wedding party on it. 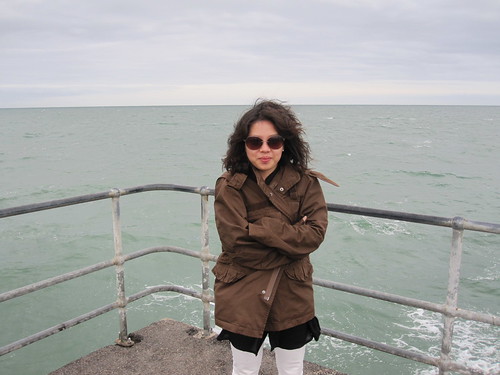 Here’s Heather wearing my jacket on the end of Glenelg jetty. The purpose of a jetty is to allow people to walk on them and peek into fisherman’s buckets to see if they’ve caught anything.

And then we ask “Caught anything mate?”, even though we know the answer. It’s all a part of being an Australian. 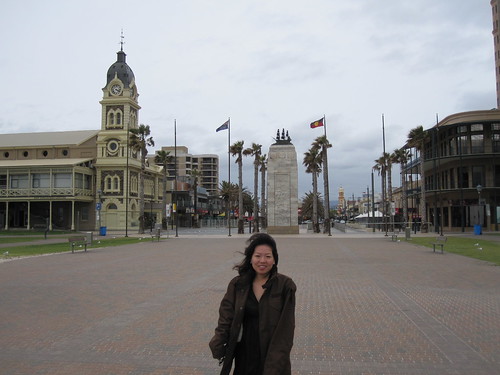 Heather and I played the poker machines in the hotel on the right. We like to dabble with statistical improbabilities, from time to time. 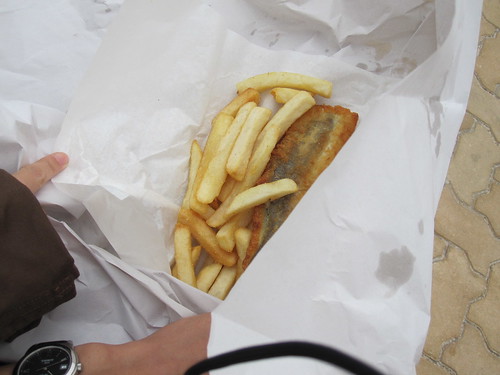 Oh, and fish and chips. My United Statesian friends in Korea often wonder what’s so good about fish and chips. That’s because they have nice Mexican food available around the clock.

Somehow I don’t think fish and chips would be as fun to eat if they didn’t come wrapped up in an unnecessary amount of paper. 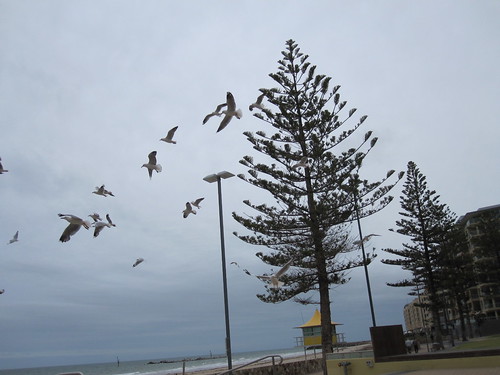 And when you unwrap any paper bundle on an Australian beach, the birds slowly begin to circle the sky.

Or hover, squawk and chirp, as the case may be. 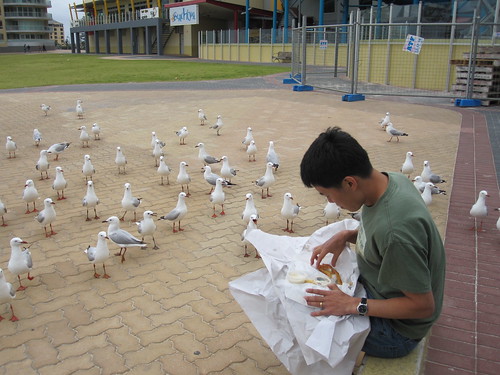 Having learned my lesson from reading The Birds, by Alfred Hitchcock, I hastily decided to share the bounty with my feathered friends. 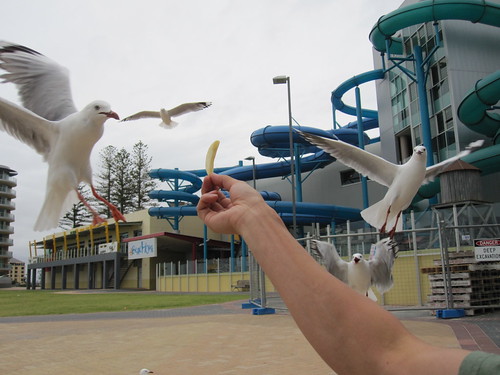 These days, the seagulls take the chips right out of your hand, which is something that they never used to do. It’s funny because if you outstretch your arm with a chip, they hover in the air for a little while and you can see them hesitating. In their minds I can imagine a whole lot of IF/ELSE statements working in overtime.

That’s all for me this time! One more honeymoon post, and then we’re back in Korea.

And I hope you like the new photo format.