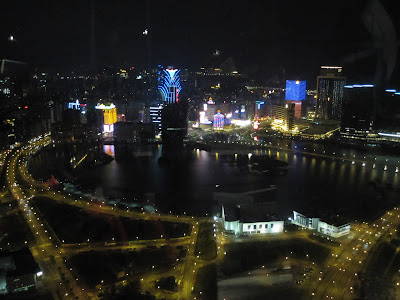 The tower itself is 338 metres tall and was commissioned by Stanley Ho, the casino tycoon. He was apparently impressed by the Sky Tower in Auckland after a visit and decided to build one in Macau. In other words, it arose from the whims of a billionaire.
“Hmm, what shall I do today? I know! I’ll build a tower…“ 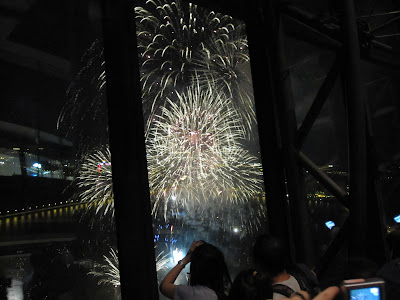 There was a fireworks show that night, part of a six night series in an international competition. Teams from different countries were invited to participate and we saw the Japanese entry, which was pretty good. 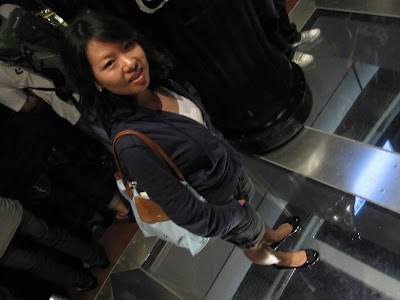 Just like the Sky Tower in Auckland, Macau Tower has glass flooring. Although I’m perfectly sure it was intelligently engineered, I still felt uneasy standing on it. Heather however, had no such qualms. She even did a little tap-dance to show me how safe it was. 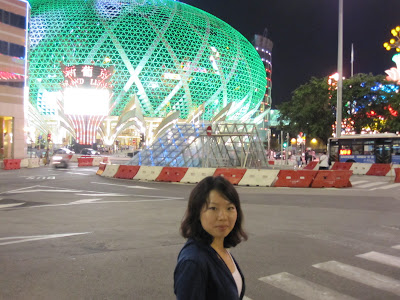 Then we went back for one last night out on the town. One of the oldest casinos in Macau is called the Casino Lisboa. It looks pretty impressive from the outside, but you can tell from the worn carpets inside that many an ATM weary patron has dragged their feet along its halls. 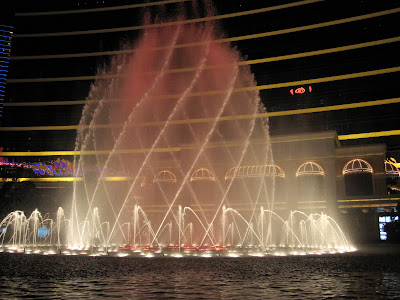 Heather and I decided that our favourite casino is the Wynn Casino. We like the decor inside and the Japanese-influenced decor. In front of the Wynn is this electric fountain display, that shoots jets of water up into the air in time with classical music. 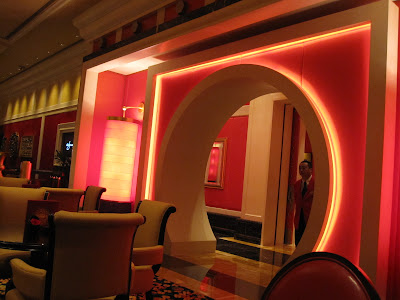 See that little guy standing in the walkway? He was standing there during the two times that we went, and like many other casino employees, his job was to give a human presence to the surroundings. The casinos are so large that in some corners there are no customers, so the casinos place workers who just stand around and show that the area is inhabitable. 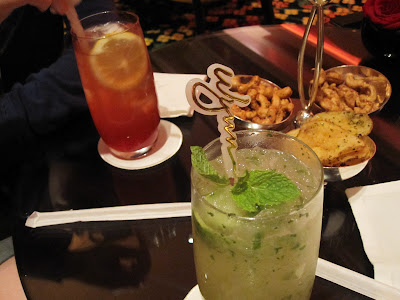 Heather and I had cocktails that were around US$10 each and were mixed well. And they made these really good home made chips, that you can see in the metal holder. They tasted like bacon flavoured Kettle chips, but were much better. We asked for seconds. 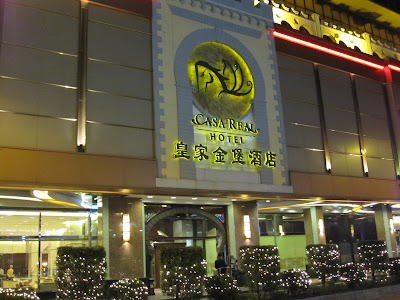 Our hotel, the Casa Real, was fairly good. It also had a small casino that seemed as if it was added as an afterthought. If you don’t want to pay large sums for the 5 star hotels, it’s a place worth considering. 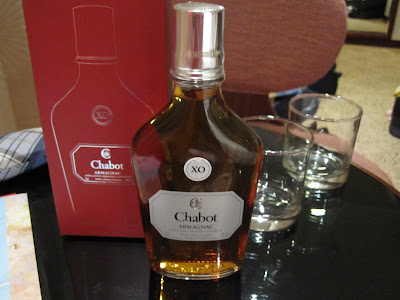 I bought Hong’s dad a 1976 cognac from duty-free. Hong is our friend in Australia whose house we stayed at and his parents have always been good to me. So anyway, when I bought the cognac, they gave us this bottle of XO for free. Heather wanted to see what it tasted like, so we opened it. And you’re not allowed to travel with open bottles on planes anymore, so we drank the whole thing. 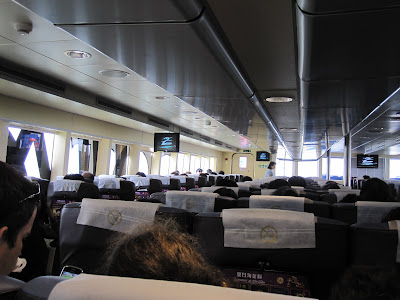 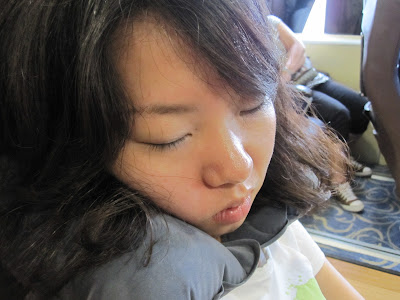 We boarded the ferry on Sunday back to Hong Kong. Heather bought this nice inflatable travel pillow, which was quite comfortable. But if you fly Cathay Pacific, they have these really well designed seats now, which have their own adjustable ‘head holder’. I managed to get a few hours sleep on the trip to Australia. 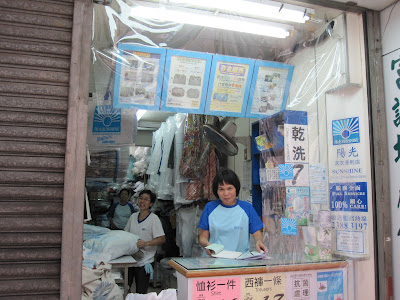 When we arrived back in Hong Kong, we dropped off our laundry at the same place we were using when we were staying there. They said they’d have it ready in a few hours, which they did. And they did three days worth of laundry for US$4. Amazing service and value. The shop is a franchise called Sunshine Laundry, and they’re all around Hong Kong, but the one we like is over the road from the Stanford Hotel. The lady was really nice.
I think it’s the first time I’ve ever had a favourite laundromat. 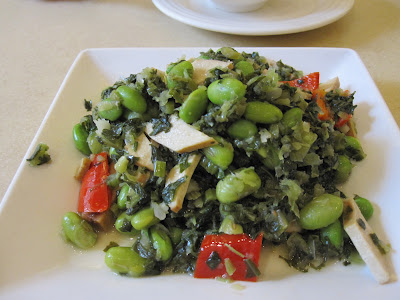 As I was saying earlier, the food in Hong Kong is generally better than what you find in Macau. These stir fried green beans were simple but delicious. 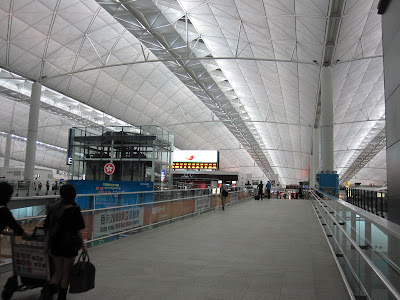 We went to the airport to catch the midnight flight to Australia. Hong Kong International Airport is easy to use and designed well. Good airports are a great asset to the cities they serve. 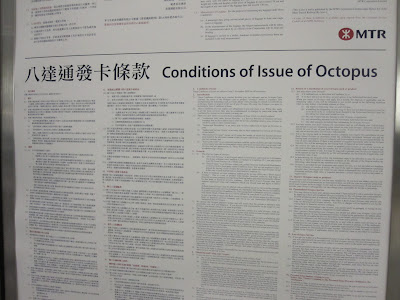 But with so much fine print to read through, we chose not to be issued with an Octopus. Still not quite sure what it is. 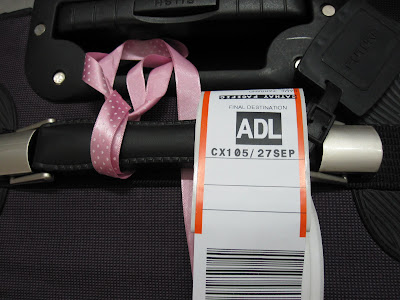 And then after a week in Hong Kong and Macau, it was time for the second part of our honeymoon. I hadn’t been back to Australia since I came to Korea in 2006, so I was really looking forward to getting back and catching up with people.
I tied the pink ribbon on my suitcase so that it’s easier to spot on the baggage pickup carousel. Luggage all looks pretty similar, so its handy to make yours look more conspicuous. On the way to Korea, I didn’t have a ribbon, so I used a shoelace. It’s a trick I picked up from my Dad.
Next post we’re going to Adelaide. See you soon!