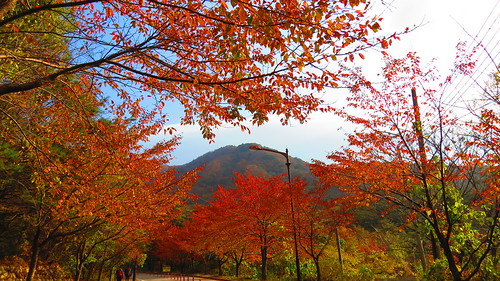 There was the choking back of tears, lots of grumblings mixed with fits of delirious happiness and elation on the way up, but I can now say that I actually climbed right to the top of  Daechongbong  peak of Seoraksan mountain! Hurray!

Mount Seoraksan is in Seoraksan national park in the North of ROK. I’d heard that it was really beautiful in the Autumn when all the trees that cling onto the mountain sides begin to turn to red and orange, so I was really excited about the mini adventure that we planned. Although I had a really great weekend, there are a few things that I’d tell others to do a little differently…

There was the choking back of tears, lots of grumblings mixed with fits of delirious happiness and elation on the way up, but I can now say that I actually climbed right to the top of  Daechongbong  peak of Seoraksan mountain! Hurray!

Mount Seoraksan is in Seoraksan national park in the North of ROK. I’d heard that it was really beautiful in the Autumn when all the trees that cling onto the mountain sides begin to turn to red and orange, so I was really excited about the mini adventure that we planned. Although I had a really great weekend, there are a few things that I’d tell others to do a little differently…

The night bus wasn’t quite the magical, wizarding Knight bus from Harry Potter, but the driving was pretty much on a par, and the stopping and starting meant you would probably get the same amount of sleep. We caught the bus from Busan’s Dongbu station, which shares the same building with the Nopo bus station, which caused a little confusion to start with. The pre booked ticket cost slightly over 40,000 won and left Busan at 11:50 at night. My coteacher had helped me to book the ticket online, before I found the link to the English site here.

Although it was really spacious and comfortable, I wasn’t expecting the bus to be stopping every hour or so, the driver to abruptly flick the lights on and off and aggressively shout at people. People were on and off the bus constantly, it’s not the straightforward trip that we’d had on the way to Gwangju. At one point he even stopped in the middle of a busy road because he realised that he’d driven off without shutting the luggage door below. Obviously the latter was just him being incompetent, but I’m not sure if this is how it is on most of the night trips.

We were told that the journey would take 9 hours over night, but we arrived into Sokcho at 5:30, over 3 hours ahead of schedule. I think if I was to do it again I would either prepare to leave earlier on Friday and invest the money in having a few hours of undisturbed sleep in a motel, or not plan to do the hike the morning following the travelling. This takes us right onto point number two…

I guess it was bad timing that I left school after event day and caught the bus the same night, meaning I’d only had a few hours sleep. The bus didn’t help things either, so when we started the hike at 9, I was feeling ok, but by lunch time I was having all sorts of mood swings, being incredibly happy to be out in the fresh air turned to being really grumpy after 3km as I realised that the peak was only half the journey and I’d have to come back down. Cue lots of self doubt and the niggling thought that I might not make it, it was only because of all the ajummas and a friendly old guy that took a liking to us that I carried on at a snail’s pace.

I’m not a hiker and I don’t have the necessary gear. I decided to just layer up as much as possible so I could add and remove layers whenever I needed to. I also wore my running trainers. Much to the amusement of some of the hardcore hikers. I stopped at one point to let a group pass me that were shoving their sticks into the ground like they meant business, and one man decided to point out the inpracticality of my shoes, just as he decked it. In your face with your hiking boots, sir!

The trainers worked fine, although on the way down it was a little slippy at times, if you have boots, or if you can borrow them off someone then do it, if not I think trainers are ok if you’re extra careful on the way down.

Food
We put little thought into the food before it was time to have breakfast in Osek just before the hike. I’d quickly packed some Percy Pig sweets sent across from England, some Capri Sun drinks and some crisps. The shops in Osek had lots of snacks, but nothing really substantial that would have been good to have for lunch. I’d read that the shelter at the top of the peak had a small selection of food, so we had ramyeon for breakfast and bought some oranges and water to take up with us, planning to buy from the shelter. But, by the time we got to the top we didn’t have the time or energy to walk even further to get to the shelter, so we had to suffice.
Nick used the Percy Pigs to entice me up the mountain, and we polished off everything we had when we reached the top, but it just wasn’t enough. I looked on enviously at all the Koreans with their picnics of gimbap, ramyeon, fruit and coffee and was incredibly jealous.
By the time we got to the bottom I was so hungry I would have eaten a scabby horse. I was happy to see the little square of restaurants when we got into Osek and we celebrated by feasting on samgyupsal, rice and chocolate that night. I’ve never appreciated Korean food more than I did that night.

I’m incredibly proud that we did it, and have to merit Nick with his patience as he encouraged me whenever I was teetering on the brink of quitting. It was a learning curve for us both!

That said, we did do lots of things I would strongly recommend. I previously mentioned that we stayed in a small town called Osek, which you can get to by catching a bus from Sokcho to Yangyang and then to Osek from there. It had a really European mountain resort feel to it, and it was so nice to be in fresh air. There were mountains surrounding us on every side of the little square that was home to many restaurants, motels, convenience stores and even a hot spring spa. Unfortunately we didn’t have time to go in here, but I imagine it’s perfect to soothe your aches after the walk.

The people were all super friendly and helpful, and the local corn makeolli that we tried in one of the restaurants was delicious.

Our second leg of the trip on Sunday was also pretty successful. We left Osek at 10:30am and headed down the coast to Gangneung, which is known as the Pine City. There are many beaches close so we hopped on yet another bus to Gyeongpo beach. We didn’t actually make it to the bus though, as something bright and shiny caught Nick’s eye and I couldn’t drag him away.

That’s right, he couldn’t resist the pedalos lined up on the pavement, calling to him like sirens. It was 20,000 for one session, although at first I was really dubious about it, I have to admit that it was a pretty good idea. There was a 4km track specially designed for the tandems and pedalos that went around Gyeongpoho lake. It was lined with sculptures and art work, which we later found out was supposed to depict a love story, but we didn’t quite get that part.

Apart from the near death experience of when we had to take the pedalo onto the wrong side of the road with oncoming traffic dashing past us as we tried to return it, this was a lovely relaxing end to a weekend I doubt my aching calf muscles will let me forget for a long time.