That’s why today we’re diving into the world of entertainment, to learn how to say ‘actor’ in Korean. When we’re done, you’ll be able to tell your Korean friends who your favorite actor is! 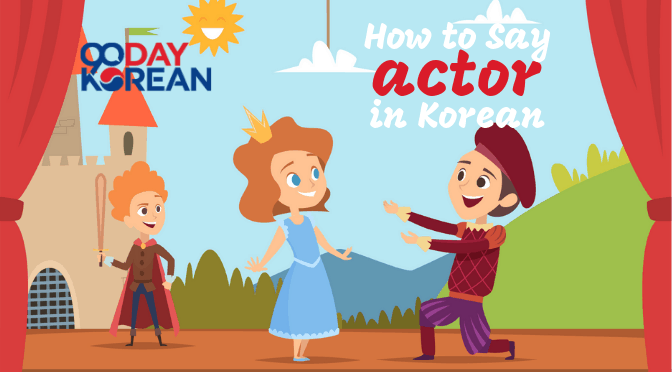 That’s why today we’re diving into the world of entertainment, to learn how to say ‘actor’ in Korean. When we’re done, you’ll be able to tell your Korean friends who your favorite actor is!

The word for ‘actor’ in Korean is 배우 (baeu). This can largely be used for both male actors and female actresses.

To distinguish male and female actors, you can say 남자배우 (male actor) or 여자배우 (female actor). You might hear these categories if you’re watching a Korean movie award show.

On occasion, actresses may specifically be referred to as 여배우 (yeobaeu), 여 being the indication for ‘woman’, but even if you can only remember the word 배우, you are already doing a very good job with learning how to say ‘actor’ in Korean.

If you’re interested in a particular male actor or a particular female actor, check out our articles for our favorites and let us know who yours are!

You also don’t necessarily need to differentiate between a movie actor or a television actor, especially now when most actors often do both movies and TV shows.

However, if you are curious to know these terms, movie actors (or film actors) are called 영화배우 (yeonghwabaeu) and television actors are largely called 드라마배우 (deuramabaeu).

The term ‘movie actor’ is formed simply by combining the Korean words for ‘movie’ and ‘actor’ into one. However, literally translated, a television actor is actually not that but a ‘drama actor’ instead.

That is because TV series are called dramas rather than television shows in Korea. But if you preferred to say 텔레비전배우 (tellebijeonbaeu / TV actor) this is also correct.

You might notice that many of these words are just combining a specific category + 배우 (baeu/actor) to specify an actor in that category. This is a common pattern in Korean vocabulary which makes learning general words like this very rewarding and valuable!

A word of caution about Romanization

While it is possible for you to study the words in this article simply by reading their romanized versions, it will come in handy for you to be able to read Hangeul if you ever wish to come to Korea. Hangeul is the Korean alphabet, and not difficult to learn. In fact, you can learn it in just 90 minutes.

After you’ve familiarized yourself with Hangeul, life in Korea will suddenly seem so much easier and the country won’t appear so foreign for you. So, if you’re serious about learning Korean, why not learn Hangeul today?

Now that you know how to say ‘actor’ in Korean, share with your Korean friends who your favorite actor is, find out who theirs is, and then let us know in the comments below!

The post How To Say ‘Actor’ In Korean appeared first on 90 Day Korean®.