I’ll be moving soon, and this fills me with some conflicting emotions. On the one hand, my current place is a sort of glorified dorm room, with no kitchen to speak of and barely enough space to do, well, anything. On the other hand, my landlords are some of the sweetest people I’ve ever met. It’s not unlike renting an apartment from your friend’s grandparents.

I’ll be moving soon, and this fills me with some conflicting emotions. On the one hand, my current place is a sort of glorified dorm room, with no kitchen to speak of and barely enough space to do, well, anything. On the other hand, my landlords are some of the sweetest people I’ve ever met. It’s not unlike renting an apartment from your friend’s grandparents.

From the very start, the woman who owns the building has been incredibly kind to me. I think she worries about me, since I live alone in a foreign country, without any family nearby. I still remember hurrying to the door, in the middle of unpacking a giant suitcase, to receive a plate of grapes. While it shocked me at the time, little did I know it was only the first of many kind deliveries at odd hours. Homemade kimchi and sikhye, more grapes, pears and even, on one memorable occasion, an extra plate of jajjangmyeon.

Her husband is a bit more intimidating, despite his rather small stature. He speaks with a gruff voice, barking out short statements and scowling, so for a long time I was kind of scared of him. However, as the weeks and months went by and my Korean improved, I realized that was just his style. Every time I left my apartment, he’d ask where I was going, and tell me to go and come back safely. If it was late, he’d tell me to be careful. If I struggled to find my keys in the detritus at the bottom of my purse, he’d get the door open for me.

While our day to day interactions are nice, it’s during holidays that their kind and welcoming attitude really shines. I experience this first back in January, during the Lunar New Year. Unlike the new year in the US, this is less a time to go out with friends and more a time to stay home and eat a meal with your family; it’s a bit like Christmas in that way.

Anyways, for various soju and videogame related reasons, I’d  been up pretty late the night before, so my landlady knocking (more like banging. she’s surprisingly strong) on my door around 9 AM woke me from a deep sleep. Assuming it was just a package or possibly more grapes, I stumbled to the door in my pajamas, glasses askew, only to have it slowly sink in that not only was she asking me (in Korean) if I had eaten yet, but she was inviting me upstairs to join her family. I managed to mumble something along the lines of “No I haven’t eaten/just a minute please/thank you”.Considering that even basic English is often a challenge for me within 30 minutes of waking up, I considered even that much Korean to be a serious accomplishment.

Still in a blur, I threw on some halfway decent clothes, slapped on enough makeup to keep me from looking like a zombie, and tried to mentally prepare myself for meeting an unknown amount of people who probably didn’t speak any English. Apparently I didn’t gather myself fast enough, though, because my landlord also came down to invite me up. I guess they were worried I hadn’t understood? Or I thought I’d gone back to sleep?

Fortunately, the family was pretty laid back. When I knocked on the door, they quickly ushered me into the living room and made me sit and eat soup with the older daughter and son-in-law and grandson, Shion. Somehow, the kid was the only one whose name I learned. Fortunately, the son-in-law was pretty good at English, so when my broken Korean fell apart, he was able to help out. The food was delicious: rice cake and dumpling soup, fresh fruit, and various side dishes. I think most of the family had already eaten, because they were lounging around watching TV, while my landlady kept pushing more and more food at me. If I stopped eating for even a moment, she would give me a slice of apple or a strawberry on a tiny fork. I guess grandmothers are the same no matter where you go.

As my natural awkwardness in unfamiliar situations started to fade, I began to feel a bit like I was spending a holiday with my own family. A bit too full of food, sleepy, and vaguely watching television as my landlord puttered away at his craft project and the grandson and son-in-law played silly games on the floor.

However, the most surprising moment came when it was time for the family to do the traditional bows and greetings and giving of New Year’s money. I knew what was happening, but as the tenant guest I assumed that I would not be included. I’m not family, and a foreigner besides, so why would I butt in? Wrong! Not only did they push me forward to bow and greet the grandparents (which I managed to do without stammering or falling over), they even gave me some money! I was shocked, and so happy. They sent me home with kimchi and fruit, and a warm feeling of being adopted into yet another family.

~*~
Time passed, summer faded into fall, and suddenly Chuseok was upon us. Chuseok is more or less Korean Thanksgiving, a sort of harvest celebration with lots of cooking and certain food that is inextricably linked with the holiday. Fortunately, this time I was half expecting to be forcefully invited up to join my landlord for a meal, though despite my best efforts I still didn’t manage to wake up in time to be ready when he banged on the door. Seriously, who is awake at 8:30 on a holiday. Crazy people.

You know what else was crazy? The amount of food. As you can see, they’d cooked enough to feed an army. Rice cakes, soup, bulgogi, some kind of beef dish, kimchi, various fried vegetables, japchae…I was completely overwhelmed.

Apparently in the months that have passed since new year’s everyone forgot that I’m capable of using chopsticks, so I had to undergo the usual volley of questions. Can you eat spicy food? Can you use chopsticks? Do you like kimchi? Yes, yes, and yes. My landlady especially loved the fact that I liked her kimchi. As she explained to me with a laugh, her husband, her son and grand-daughter all don’t like kimchi. I managed to get in a bit of a joke there, asking the son if he was Korean, to which his mom replied that he’s probably an alien. Apparently my humor is only effective on old people and children. Not entirely sure what that says about me…

After eating more than I thought was possible, we all settled into a comfortable and sated quiet in front of the television, which is when I discovered that my landlord is a minor local celebrity. He makes these amazing sculptures and containers out of folded paper, and the best thing is, the paper he uses is recycled takeout menus, coupon books, and ticket stubs. Apparently this caught the attention of a local tv crew, because suddenly there was my neighborhood on tv, with reporters following my landlord around as he gathered the materials he needed.

He must spend most of his time on this hobby, and it’s really adorable how proud of his work he is. When he caught me taking some pictures of the collection, he insisted on getting a shot of him sitting in front. He even gave me a small one! I haven’t quite decided what to use it for, but I know I’ll treasure it. 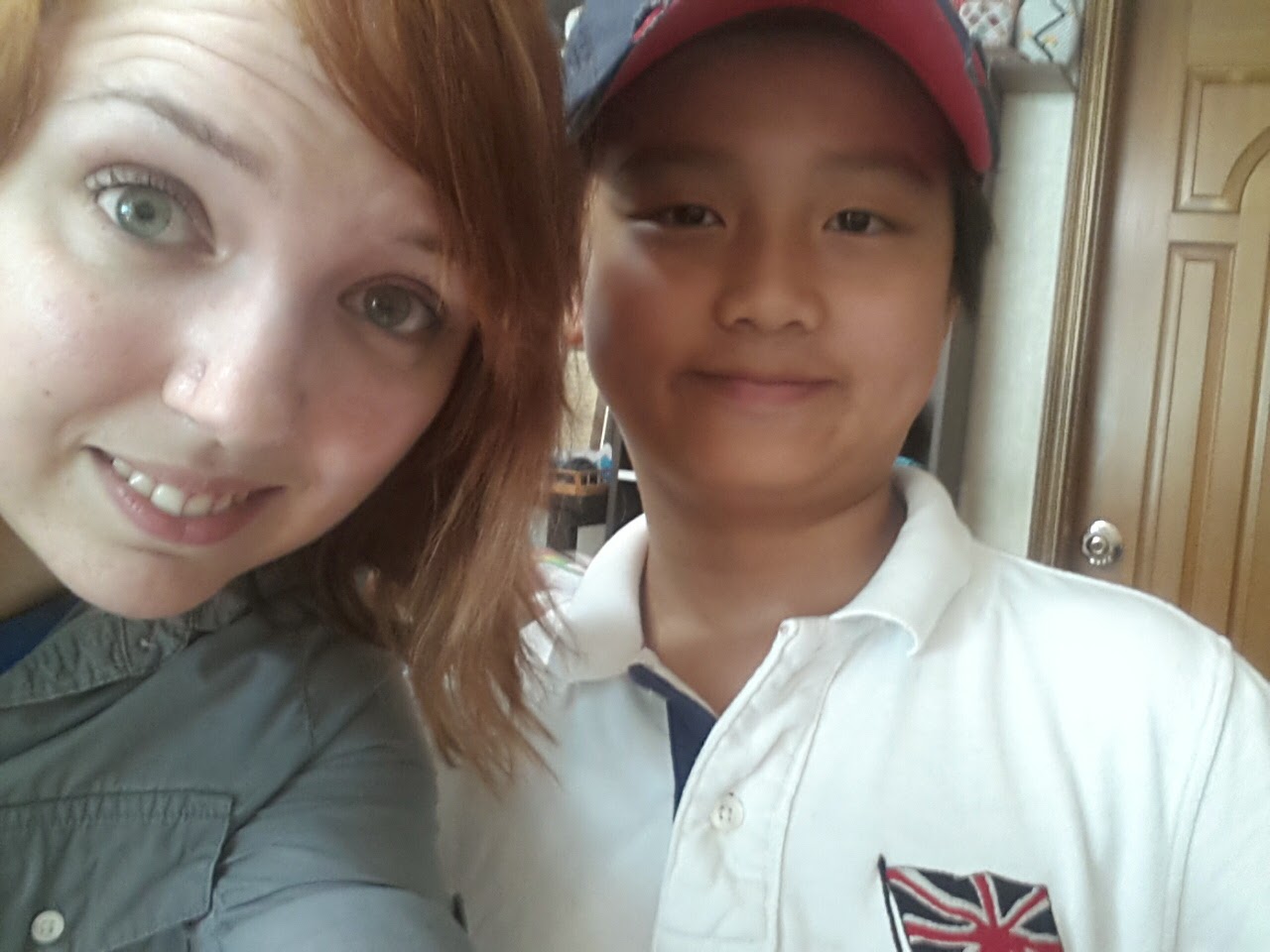 I’ve found a new place to live, but it’s not far. It’s probably not likely, but I hope I’ll be able to stay in touch with this incredibly kind and generous family. I wish it were easier for me to tell them how much I appreciate all they’ve done for me. I guess it’s motivation to get back to work on my Korean studies, huh? A friend suggested I write a letter in Korean, but so much of what I want to say is way above my level. Being so far from family is one of the hard parts about living over here, but if I keep meeting people like this, I know I’ll be able to survive.