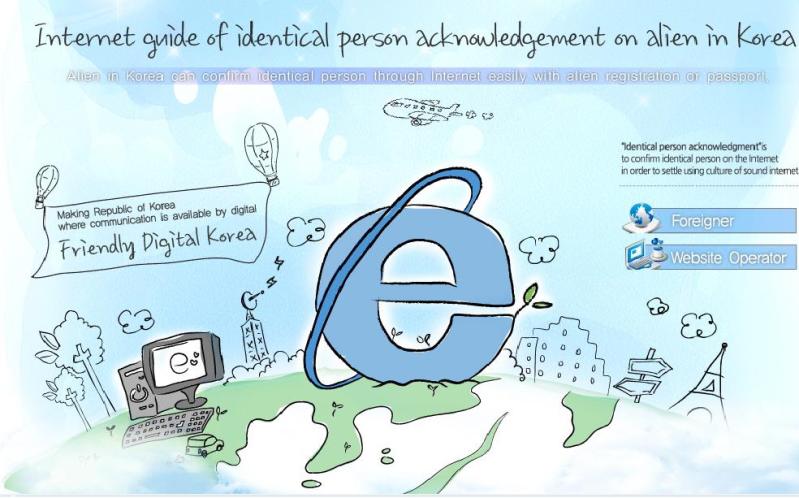 Hat tip to Brian in Jeollanam-do and Kwangdong Brian of Gangwon Notes for breaking the story…I think…
Somehow I’ve managed to go from travel writer and commenter about life in Korea to website reviewer. The task is not too tall, and frankly speaking the word needs to get out there. The Chosun Ilbo recently reported the new website’s existence, but didn’t offer much more about the new site.
Here’s the website in question: ifriendly.kr – click on the ‘English’ link to see the page in English. It’s sponsored by the Korea Communications Commission and KAIT (Korea Association for Information and Telecommunication) – yet another instance where some serious government money has been spent in a dubious manner.
We’ve recently seen how NOT to make a tourist website – and apparently the same crew is at it again. This time, it’s supposed to help a foreigner with problems they might have when joining Korean websites. Some Korean websites only accept ID numbers from a Korean ID card – the number on an expat’s ARC doesn’t do the trick.
To put it mildly, the English is horrible. Absolutely horrible. Brian quotes from the website (or you can see for yourself):

“Internet guide of identical person acknowledgement on alien in Korea”

“Alien in Korea can confirm identical person through Internet easily with alien registration or passport.”

“Making Republic of Korea where communication is available by digital”

“Citizens staying in a foreign country who are residing in Korea”

“Does identical person acknowledgement not work? try to confirm the followings!”

Another thing that’s missing on the website is functionality. There’s no indication of how you’re supposed to ‘confirm your identity’, and why this would be helpful. There’s also no way of actually doing it – the closest I got was a animated video showing the proper way to do…something…
Personally, I haven’t bothered to use most Korean websites. Between not having the time and not having a compelling reason to join CyWorld, there’s little point in braving the language barrier, the ID barrier(s), and so on just to join an online ‘community’ that’s not really meant for me anyway.
There’s one minor credit I can give the effort – it actually works in IE, Firefox, and Chrome. I can’t speak for Mac or Linux users. Whether that’s by design or because the site has – gasp! – conformed to World Wide Web standards, I couldn’t speculate on.
I rarely encourage my readers to respond in an organized way, but this is one of those cases. Unless you’re exempt from paying taxes or working illegally, some of your tax money was spent on this website bereft of benefits. Since this service/website has been designed towards meeting expats’ needs, let’s encourage them to make it actually work instead of throw something together and say it’s done. That’s what my first-graders do, Korea – and adults should be shamed into doing better.
Here’s one place to write: [email protected] If you find more points of contact, leave a comment on this post. Simply saying that you’re disappointed in your inability to use the new site is fine, but offering specific suggestions is almost certainly more useful.