A version of this interview appeared in May 2010’s issue of the Groove Magazine. All photos below are my own, and may differ from the printed version. 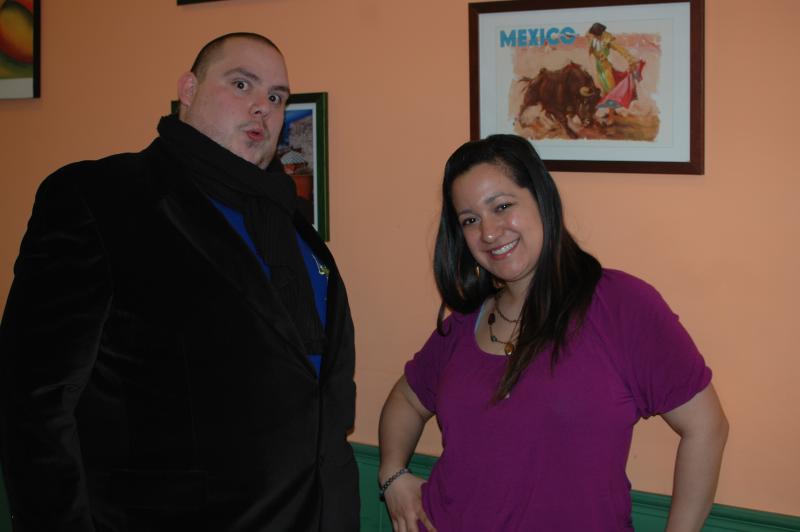 I recently sat down with Edward Burgos and Viviana Serratos over some burritos at Dos Tacos, eager to learn about their movie-making while in Korea. Their uncommon backgrounds (Edward is 1/2 El Salvadorian, while Viviana claims to be “Mexican, Puerto Rican and Spanish, and a mix of some other passionate cultures”) give them a unique perspective on life in Korea.

A version of this interview appeared in May 2010’s issue of the Groove Magazine. All photos below are my own, and may differ from the printed version.

I recently sat down with Edward Burgos and Viviana Serratos over some burritos at Dos Tacos, eager to learn about their movie-making while in Korea. Their uncommon backgrounds (Edward is 1/2 El Salvadorian, while Viviana claims to be “Mexican, Puerto Rican and Spanish, and a mix of some other passionate cultures”) give them a unique perspective on life in Korea.

Chris Backe: Tell us about yourself – how did you get into movie-making?

Edward Burgos: I studied Politics at UKC University in Canterbury, England, but I had no idea what I wanted to do. Eventually I began teaching English, then moved to Korea in 2005. While in Korea, I began learning about cameras and cinematography. On my way to work one day, I was reading a camera manual while riding the bus. I was so engrossed learning about light refraction that I missed my stop! It was an epiphany – loving what you do is so important.

Viviana Serratos: I free-fell 25 feet while rock climbing, broke the tibia and fibula in my right leg, the fibula being a compound fracture and almost died in the process. I was 19 and unhappy in where I was in life and school. I had always had this intense interest in film and wanted to direct, but came from a family where something at that caliber was unreachable. After recovering from my accident I ended transferring to film school and found my true passion and began pouring myself into film making, eventually working in Hollywood as a director’s assistant. I was fortunate enough to be a part of the films ‘Pride and Glory’, ‘The Rocker’, and ‘What Happens in Vegas’. Working as a director’s assistant was a lot like being an apprentice – you’re always learning and doing something new and learning what a real director goes through. After the writer’s strike and the economy going south, I came to Korea to teach English and learn the culture. It’s been a great opportunity to create instead of just thinking about creating.

CB: How did you two first meet?

VS: We met over the 48 Hour Film Project [a film-making contest where a team creates and produces a short film in 48 hours] and I contacted Edward because he had a video camera, but, sadly, was already committed to another team. A few months later I was directing a short film, THE RIGHT MARK, a cool little Romantic Comedyesque short, and we talked over some beers and funky corn with ham, and we eventually realized that we could make some movie magic together. I just knew right then that he was an amazingly talented man.

CB: What have you put together so far?

VS: [One of my favorites] is on Vimeo. It’s called ‘The Last Request’, and it’s basically a joke turned into a short film. Another of my favorites is on hitrecord.com – it’s called ‘Frequency’, but you’ll have to see it for yourself.

EB: I am in post production on an adaptation of a short story by Robert Heinlein, a contemporary of Isaac Asimov. It’s a cool noir-like sci-fi story about paradoxes. I hope to have it done in the next few months and have it up on my website.

CB: Being an English teacher must take a big dent out of your day – how have you worked around the schedule?

VS: Even after teaching, Taekwondo and Hapkido classes keep me busy during the week. But I always have a book with me, and I’m always thinking, jotting down notes to remember what I’m thinking about.

EB: I go through phases – some months I’m super busy with work, other months I’m spending every spare minute editing, producing, and so on. My master plan is to get a university job so I can get 4 months of paid vacation every year and make films!

CB: What drives you?

EB: If I’m not working with a film, I wonder, ‘why not?’ – I’m always seeing a shot, thinking of a short script, and my brain’s always working. You never really clock out from this sort of thought. Even the vocabulary is important – learning what a Dutch angle is or the technical aspects of lighting gets me pumped, something I never thought would happen.

VS: I left Hollywood because I felt it lacked originality – all they’re doing nowadays is remakes, movies of books, or just focusing on the special effects. In Hollywood, people want to use you to climb up. I’m going back there – but first I’m putting on a suit of armor for when I go back. The movies I work on now don’t have a budget, but it’s actually a blessing because you have to use your imagination. There’s also more freedom – there’s no investors or studios yelling at you to make the deadline. If you’re going to be a full filmmaker, you’re responsible for every step of the process. That means you’re always learning something new, and I have had always loved learning.

EB: It’s rentable for the most part, but you still have to know how to work it. If you’re serious about making movies, you might consider buying the equipment you’ll need.

EB: Right now I’m working with ‘Root Experience’, a theater group that emphasizes artist and audience interaction, breaking down the fourth wall, and bridging cultures. I’m working with Simon Magnus, another producer and theater director to put together a feature-length documentary. I’m also starting a podcast where I talk about film – that’ll be at http://enanoski.webs.com.

VS: I would love to make a short film with Korean actors and use a Korean pseudonym [to make it appear that a foreigner wasn’t at the helm]. I’m currently on a radio show – TBS’s ‘Drive Time’ every Saturday providing the latest in Hollywood Gossip. My main film goal while in Korea is to build a collection of people’s experiences of living in Korea – ideally, I want to put these short films together like a quilt. Get a foreigners perspective of Korea and make it into a feature, having myself and other film makers direct these shorts. Also, I’m always looking for scripts to direct!

CB: How can people get involved with your projects?

EB: If you’re passionate about your art, I’ll work with you. You also have to remember that it’s a team effort. I’ve learned so much from the people around me that I have to ask ‘why SHOULDN’T I give back to the people around me?’ Stick with your friends, and be generous with them. You should never lose your civility. The little extra kindnesses really do go a long way.

CB: Any advice for other people looking into start something new?

EB: Love what you do.

VS: But keep a balance, or you’ll lose your head.

EB: You have to take the first step – don’t wait for someone to connect all the dots for you. You’re the one that has to make things come together. Don’t wait for a Korean partner to run interference or provide all the money you need. I tell my friends to keep me in check, to ground me. I can’t imagine becoming a sudden success story like that low-budget zombie film gone huge [“Colin”, which wowed crowds at Cannes on a budget of about $70].

CB: Anything else to add?

VS: Just that I’m very impressed with peoples willingness to get involved in Korea – weather it be giving their time, losing sleep or offering their homes to be invaded by a bunch of strangers with a camera, people are there to do whatever needs to be done. I am blessed to have made a good group of friends who provide a great deal of support for my art. Thank you.