A version of this interview was published in May 2010’s issue of the Groove magazine. All photos in the printed article are Aaron Brown’s; all photos below are my own. 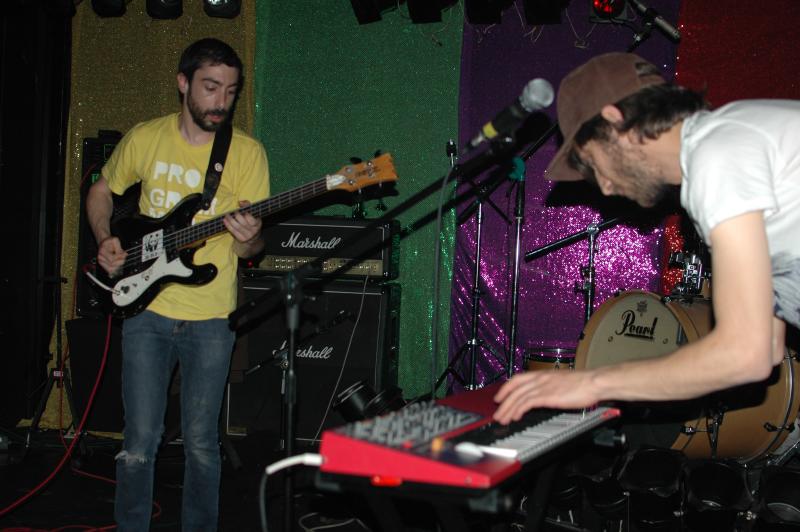 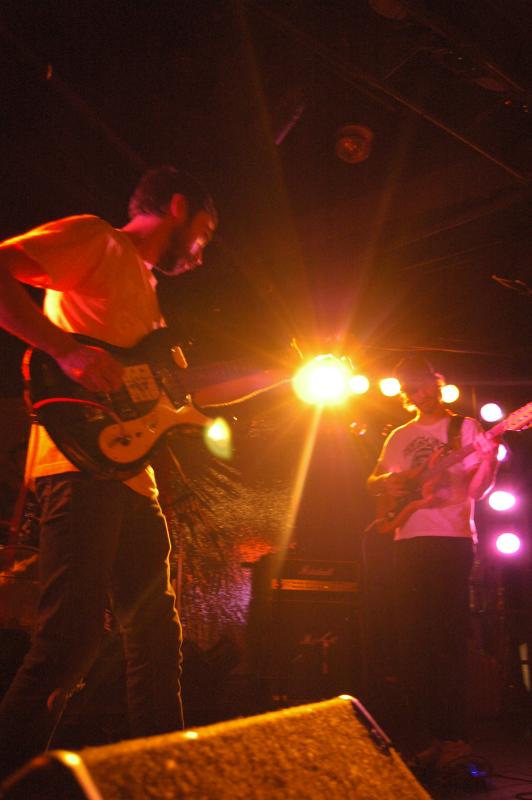 A version of this interview was published in May 2010’s issue of the Groove magazine. All photos in the printed article are Aaron Brown’s; all photos below are my own.

With little warning, the synth keyboard, guitar, and drum trio halted their sound check and listened. “Can you check that feedback? It might be a bad cord.” The venue staff went silent as the noise played on. The curious part was this feedback had a melody – not like the tune they were playing, but something strangely similar. A off-kilter foreshadowing of the performance, or just a weird glitch? Turns out it was the latter, but still an unusual moment with an unusual band.

I had a chance to chow down on some pre-concert samgyeopsal with the Sacramento-conceived, Portland-transported trio What’s Up. Making their debut in Korea with SuperColorSuper (a promotional company), they didn’t seem too fazed by the unusual elements of Korean culture – “we really dig the kimchi” was heard repeatedly from all members of the band to this writer’s surprise. With shows in Busan, Daegu, Seoul, and Daejeon, they’ve had a great chance to experience some of Korea’s, er, distinctive, culture. “This one drunken businessman, he was shaking my hand and he just wouldn’t let go – he was asking me, like, how old are you and where are you from” – just the sort of culture shock every foreigner gets at least once during their time here.

Korea isn’t exactly known for bringing in indie acts that weren’t formed here. “Sean [Maylone from SuperColorSuper] lives out here and got us a chance to perform across Korea.” While this isn’t the promoter’s first concert – they were responsible for Do Make Say Think’s February performance in Seoul, among others – the nascent company has already gained a sizable following, as evidenced by the crowd at Seoul’s concert.

Teddy Briggs goes between the drums and keyboards; Brian Pasos keeps the bass alive, and Robby Moncrieff claims the title “polymorphic instrumentalist”. Their current record – a seven-song, thirty-minute EP entitled “Content Imagination” – is for sale at obstructivevibe.com, along with some of Robby’s other projects. “We’ve been working on a new album for about a year and a half now”, although Robby couldn’t say when it would be released. Robby also mentioned he’d be DJ’ing for the after-party, although “I don’t really know what I’m doing…” was his summary of his skills. If Robby is genuinely worried about his DJ skills, just wait for them to build as his musical skills clearly have.

As for the music, it’s less about understanding the nuances and more about admiring the work that goes into making said music. There’s a lot of technical prowess that goes into the production of each and every song. To some it might sound like noise; to others, it’s a series of complex and progressive compositions. It pulses, swaggers, staggers, randomizes, and syncopates – yet stays tightly together. Robby’s background mastering tunes from old-school NES games (look up The Advantage from circa 2004 to hear some more of those chops) makes him the perfect guy to mix up those sounds he surely spent hours originally learning. There are no lyrics to get in the way of the almost robotic instrumental sound, and they’re not really needed.

While What’s Up has returned back to the States (and “a burrito from the Mission in San Francisco”, added Teddy), look for more concerts from SuperColorSuper coming to Busan, Daegu, Seoul, and Daejeon in the future. This month welcomes the California duo Xiu Xiu, complete with synth-pop, gothic chiptunes, and an atonal guitar. Look for more information about future performances at http://supercolorsuper.com/all-shows/.

© Chris Backe – 2010
This post was originally published on my blog, Chris in South Korea. If you are reading this on another website and there is no linkback or credit given, you are reading an UNAUTHORIZED FEED.