Thoughts: Tucked away in a back alley not far from Bongcheon station is  a collection of average looking Korean restaurants, and that’s where you will find the two locations of ‘The General’s House’ on opposite sides of the street to each other.  It doesn’t look like much, but it’s one of the few places we have found that offer a taste of Jeonju style makgeolli  (an overwhelming showing of side dishes that come out as a matter of course when you order your makgeolli kettle) in Seoul.  Bring your appetites and your sense of adventure, as there are foods here not on the regular makgeolli anjou circuit. 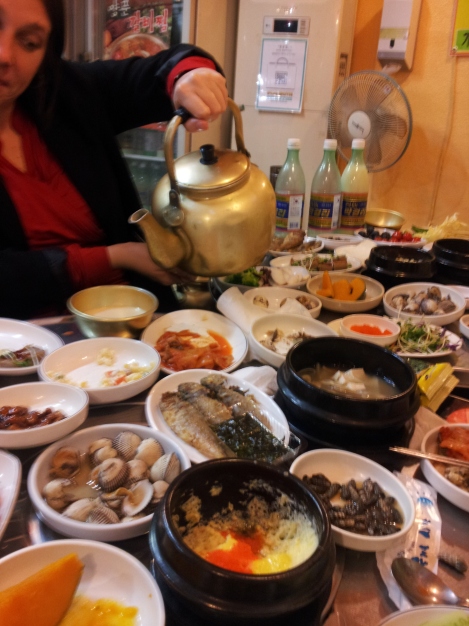 Jangun House is one of the few places we have discovered as yet that offers the Jeonju style of serving makgeolli (the other being Jeonju Makgeolli in Hongdae).  The atmosphere is made by the people there, which at this time was just us, but the owners soon warmed up to our large group and were quite friendly.   The quality of the variety of food ranged from average to good, and was more than plentiful.  There is also a separate menu which you can order from if you have room.

What Mamas & Papas liked: The dubu kimchi. Most Mamas & Papas made some kind of comment as to thickness of the tofu and the deliciousness of the kimchi.  Mamas & Papas also liked the sheer range of food on offer to try, with one Mama exclaiming ‘I should have fasted so I could eat more!”

What Mamas & Papas didn’t like: The Hongoh (skate fish).  Shock horror, this notoriously smelly fish did not wow our Mamas & Papas, with one Mama commenting ‘Tough, tough, tough!”.

However the owners did ask us if we wanted to try it or not, which was nice to have the option.  Mamas & Papas were also not overly impressed by the makgeolli.   One Mama remarked ‘It’s not amazing, but it will do in a pinch’.

There are two kinds of makgeolli on offer at this place, one being the usual green bottle Seoul Makgeolli, and Sasan Makgeolli from Jeolla-buk do.  Both contain Aspartame, though Sasan has a lower percentage.   Drinking makgeolli in Jeonju is a large consumption event, and often the makgeolli is lighter and less strongly flavored.

Recommendation: This is a good location for those who want to experience the Jeonju style of drinking makgeolli, enjoying dish after dish of anjou, but can’t get out of Seoul to try the real thing.  It’s a casual neighborhood affair, but great if you have someone in town you would like to give a taste of a variety of dishes.  For large groups you might want to make a reservation.

Have you been to Jangun Jip before? Tried more dishes or have more opinions? More questions? Leave us a comment below and tell us what you think!