I heard about Jeongwol Daeboreum last week. And by heard about it I mean this:Female Kiwi: Hey, I heard there is going to be some sort of festival down on the beach with a bonfire on Sunday. You down?
Me: HELL YES! Fire+Beach=Amazing happiness.

I heard about Jeongwol Daeboreum last week. And by heard about it I mean this:Female Kiwi: Hey, I heard there is going to be some sort of festival down on the beach with a bonfire on Sunday. You down?
Me: HELL YES! Fire+Beach=Amazing happiness.

I thought I had made plans with Bike Boy and his bazillion friends to meet at Mulgeum station…only when I got there it turned out they were going to a DIFFERENT festival in Changwon. Changwon is cool but I really love the beach….nothing was going to tear me away from the beach. Hooligan and I were supposed to meet up with the Partial Asian and String Bean but they decided to get lost on his motorcycle instead. However, as soon as we got to the beach we happily ran into Tea and Crumpet (guess what country she is from) and her cousin! It was a merry reunion as she is absolutely fabulous and possibly as book mad as myself. Anyways, they had a kite and buried the spool in the sand since the wind was quite enough to keep it aloft without any help. If we had gotten paid every time someone else played with the kite, we’d be rich! It was super cute though.  The boy standing with the blue jacket kept trying to work up his courage to touch it. We told him it was okay (in Korean) and his grams encouraged him but it took him a grand effort to do it. He was quite thrilled once he finally worked up the nerve to stand closer to the foreigners. 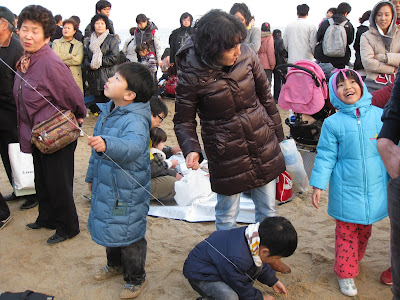 Also, festivals in Korea always involve copious amounts of alcohol. You feel guilty for drinking on a Sunday afternoon until you see parents with two year old kids tucked under their arm with kettles full of makoli (rice wine type stuff).When I got Thai food a couple of days ago I picked up a “Dynamic Busan” publication (Korea spends millions of dollars on the worst advertising people ever) there was an article on Jeongwol Daeboreum which as far as I could gather is a celebration of the first full moon of the lunar new year. Wishes are made and tossed into the fire. Enough of the technical stuff: what it actually boiled down to was a whole lot of fantastic meandering on the beach, hopelessly trying to find friends and running into other expats you didn’t realize were there in the first place. Kids and adults flew kites, threw sticks, drank and ate to abandon, waiting for the sun to set. 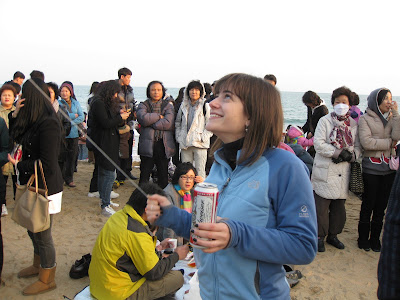 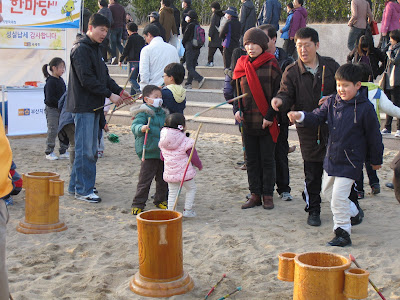 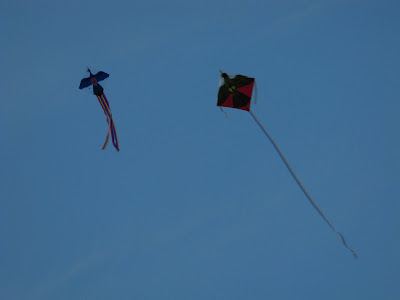 I mainly people watched until the fire got lit…at which point I was a happy little pyro, snapping away pictures, putting out minor spark fires in my hair and generally having a good time. 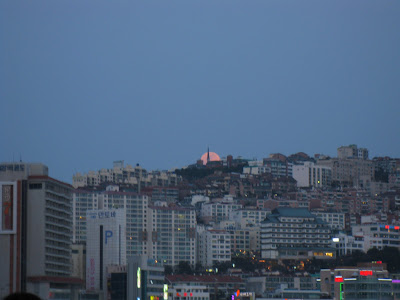 The moon rising over the hill! 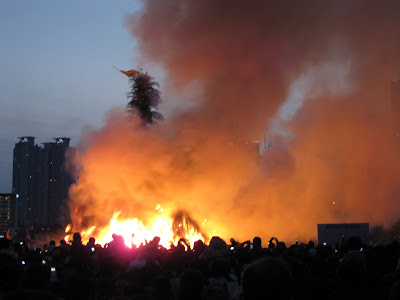 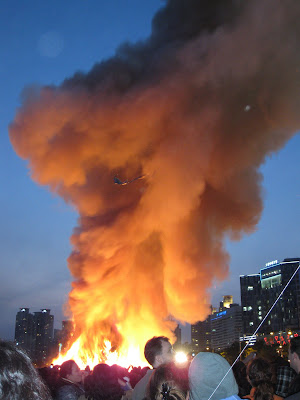 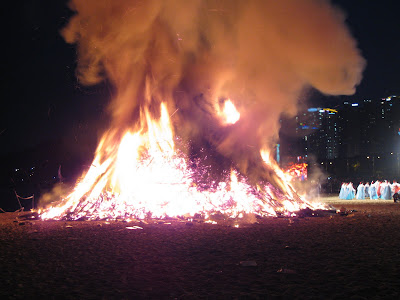 Dancers in traditional hanbok. SO COOL. I wish I could have gotten better pictures but I was standing a bit far away and there is only so much my amazing little point and shoot can do. 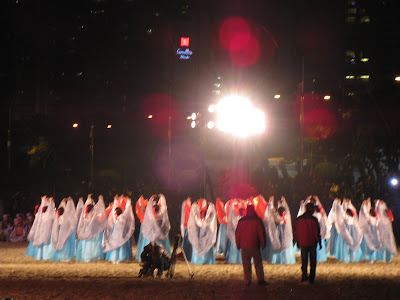 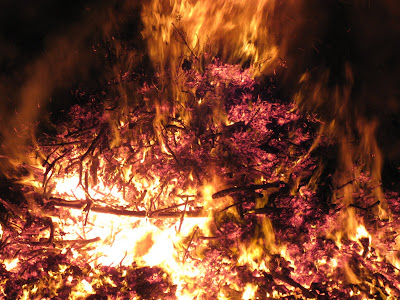 So the Thai restaurant we went to afterward was NOT equipped or ready to handle the influx of people coming in from the festival. We waited ages for our food…and then it wasn’t all brought out at once. String bean got his dish 20 minutes before the other 5 of us and I got my dish 10 minutes after everyone else. I occupied my time by drawing a monster on my menu which we named the Cragon…half demented cat, half demented dragon. The hooligan requested that he be renamed the Cragon so there you have it. From now on, the Hooligan is the Cragon. String bean also thought of a wonderful name but I can’t remember it so he shall remain the String Bean for the time being. 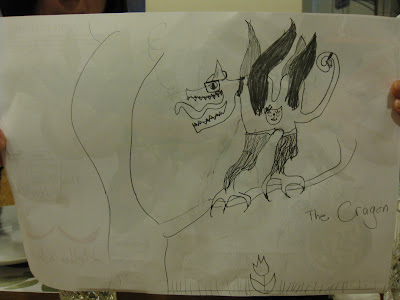