Time has been flying by. It feels like just yesterday I was bemoaning the changes in my office, with favorite teachers moving to new offices or even worse, new schools, and scary new teachers moving in and refusing to let us turn the heating on. Imagine that. Wanting to turn the HEATING on. Now I have constant daydreams about air conditioning. They said it would be on this week, but…

Time has been flying by. It feels like just yesterday I was bemoaning the changes in my office, with favorite teachers moving to new offices or even worse, new schools, and scary new teachers moving in and refusing to let us turn the heating on. Imagine that. Wanting to turn the HEATING on. Now I have constant daydreams about air conditioning. They said it would be on this week, but…

Anyways, I bring up the rapid passage of time because recently, we had a bit of an office family reunion. By the end of last semester, especially after spending so much time together during winter break, some of my officemates really started to feel less like coworkers and more like friends or family. Our daily lunch adventures became comfortable; our group narrowed down to the usual suspects. Lee Kyuwon, the taciturn but kind office head, with his amazing knowledge of tiny local restaurants. Hong Mija, the other office head, always trying to communicate with me, even though her knowledge of English is as limited as my knowledge of Korean. Kim Yunju, who feels like a sister and who is the only one who likes spicy food as much as me. And of course Jang Hyeonji, my lovely coteacher. Sitting in the car on the way to our meal, it felt less like 5 coworkers, and more like dad, mom, and three sisters.

So, months later, after ages of planning over kakaotalk, we managed to all find a time to meet up and try to put our little family back together. That makes it sound like something catastrophic happened, wow. Nothing so horrible that a little dinner couldn’t fix. We all piled into Kyuwon-ssn’s car and, as usual, I had no idea where we were going, how long we would be there, what we would be eating, etc etc. All I knew was that we were meeting at 5:30…somewhere in Korea. I assumed.

As it turns out, we ended up in this amazing little restaurant way out in the middle of nowhere. I didn’t even realize it was a restaurant until everyone started getting out of the car.

Tucked away off a tiny road, hidden among the bushes and trees, I felt as if I’d wandered onto the set of Secret Garden, the bit with the actual magic garden on Jeju Island. There was a rooster on the roof, that we all assumed was fake until it moved. The coolest thing was that instead of sitting in the main building, we got our own tiny private room with a big window facing out on the scenery. To summon the server, we literally had a phone that acted as a sort of walkie talkie between us and the main building. It was brilliant.

As you can probably tell, we all sat on the floor around a beautiful low wooden table, munching on side dishes as we waited for the main event. I can’t remember all the dishes that were there, but all the vegetables were so fresh and delicious, I would have been happy to eat only those. There were fresh cucumber spears dipped in red pepper sauce, kimchi, sautéed mushrooms, hot peppers, fish cakes, and a few other vegetable selections that I didn’t recognize but were nevertheless consumed in great quantities by all.

Ah yes. The main event. I love how many dishes in Korea you have to cook yourself. From ramen to BBQ, it gives the meal a fun, hands-on vibe, though it also kinda stresses me out unless I’m with someone who knows what they’re doing. Fortunately, in this case it was just a sort of soup, and who doesn’t know how to heat up soup?

As you can see from the picture, we were rocking some seriously healthy dinner plans. Lots of leafy greens, those tiny mushrooms that look like noodles, and under all that was a whole chicken (in pieces), rice, and some spices and onions and stuff. The chicken was, I assume, already cooked, but once we got the burner going, the whole thing quickly got up to a nice boil, slowly cooking the greens and mushrooms as we stirred from time to time.

It was such a simple, delicious dish. Also, you’ve never really lived until you’ve tried to eat chicken off the bone with only chopsticks and a spoon. I can’t say that my method was…graceful, but the chicken got from my plate to my mouth with minimal accidents, so I call it a win. While I feel like this soup would be wonderful on a cold winter day, the simplicity of the ingredients also rendered it surprisingly refreshing on a hot, muggy day. 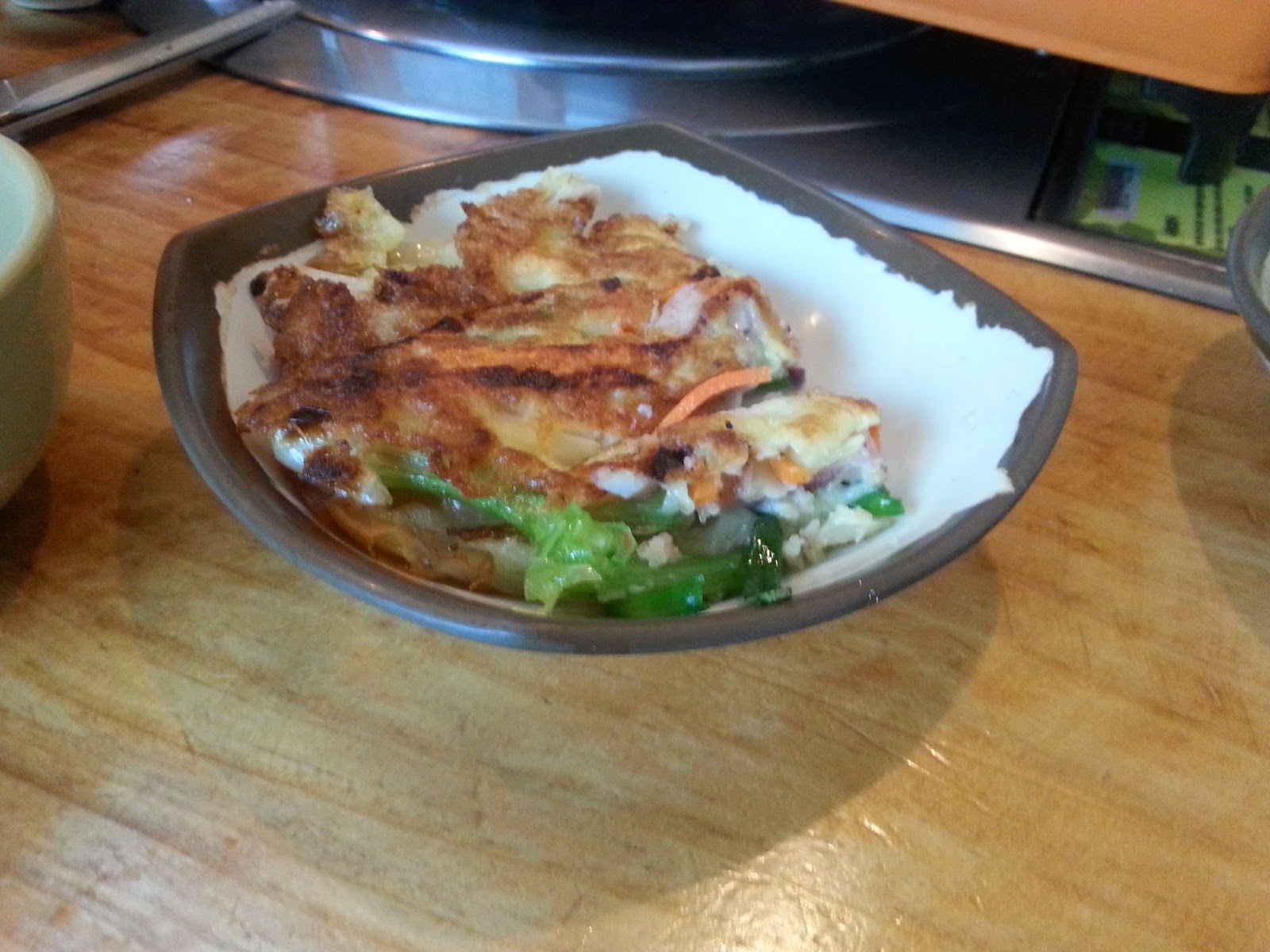 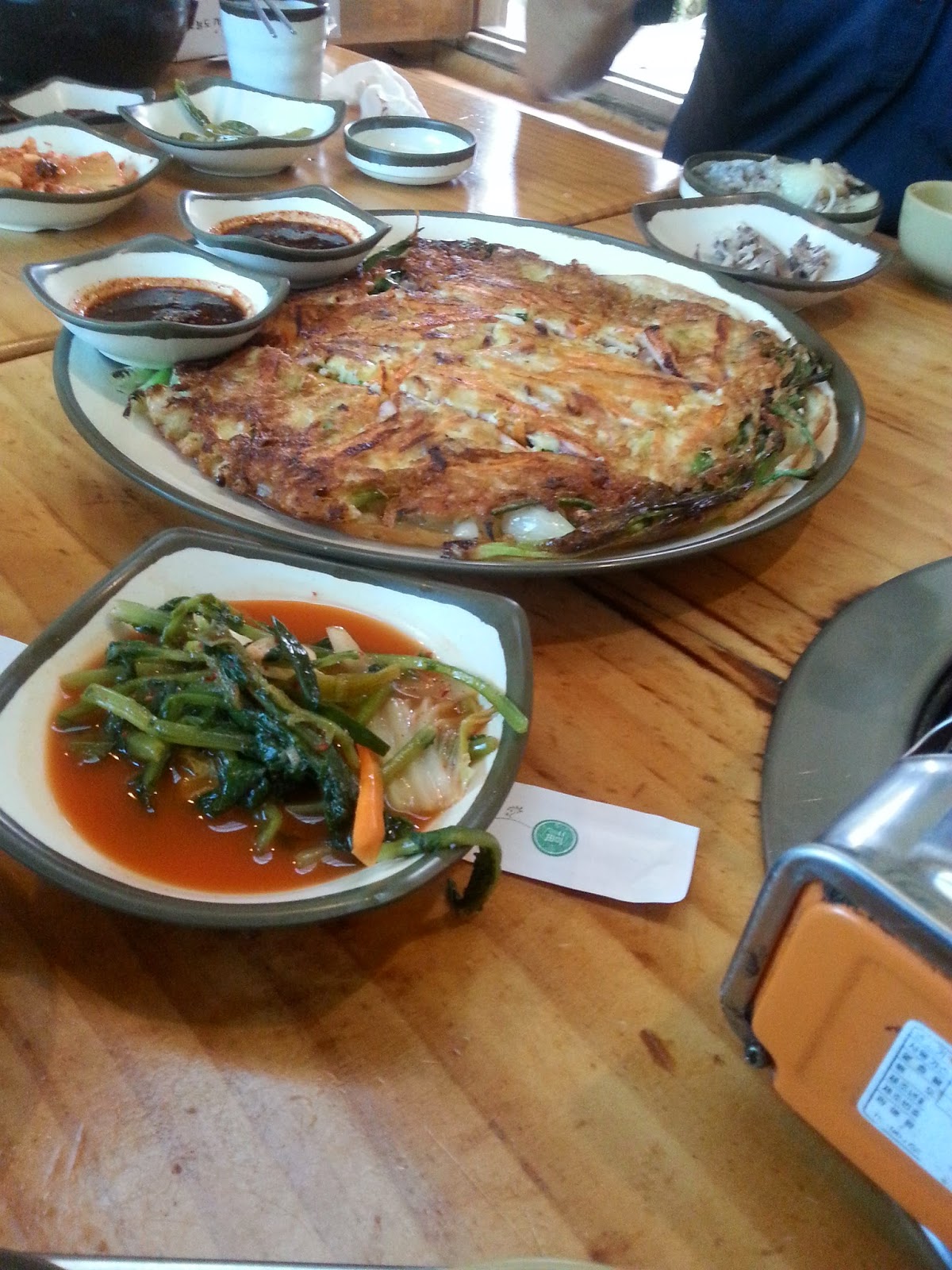 Then, as if we didn’t already have enough food to feed a small, healthy army, we ordered a squid and vegetable fried…sort of pancake…it’s hard to explain, but trust me, it was fantastic. I’ve had a lot of these, at various restaurants, but this may have been the best. It was really thick, stuffed to the gills with fresh veggies and squid, and even though I had already eaten a ridiculous amount of chicken, I couldn’t resist it’s fried, tentacly charms. Is tentacly a word? NOW IT IS.﻿
﻿
﻿

The final element to our meal was a bowl of dongdongju, which is a sort of sweet, traditional rice wine. It came in an earthenware pot with a ladle, and we drank it out of small bowl-like cups. As I relaxed, nibbling at side dishes and sipping my wine, I slipped into that perfect feeling of belonging somewhere, of being comfortable enough with a group of people to just sit and listen to the conversation wash over you. What I mean is, I felt like I was at a family dinner, where my family just happened to all be speaking in Korean. I faded in and out of the talk, understanding for a while and then losing the flow again, but I didn’t mind. The air was warm, and after my second cup of wine, I was feeling pleasantly fuzzy around the edges.

It’s evenings like this that keep the homesickness at bay, finding pockets of home even in the most foreign of settings, shaping what is unfamiliar into something comforting, something safe. Because when you’re this far from home, what else can you do but make a new home?