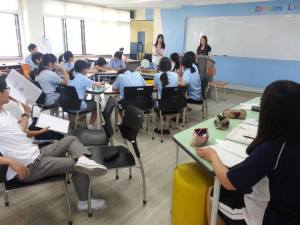 We came to Korea to be teachers, to help children to learn. Turns out that working as an English teacher in Korea has taught us a lot of things too: lessons in leading, discipline, understanding and eternal patience (ok, still working on that last one…). And, we’ve learnt that school in Korea is completely different than in England; would you ask about a teacher’s relationship status in the UK? Most probably not. In Korea? It’s one of the first questions you’re asked (and repeatedly asked again, and again, and again).

We came to Korea to be teachers, to help children to learn. Turns out that working as an English teacher in Korea has taught us a lot of things too: lessons in leading, discipline, understanding and eternal patience (ok, still working on that last one…). And, we’ve learnt that school in Korea is completely different than in England; would you ask about a teacher’s relationship status in the UK? Most probably not. In Korea? It’s one of the first questions you’re asked (and repeatedly asked again, and again, and again).

So travelling across the world to teach is a learning curve, to say the least. Here are some of the things that I’ve come to expect as a teacher working in Korea:

You simply cannot walk down the corridor without being bombarded by greetings from students at every turn. It was quite a shock at the start, although a nice one, of course. Waving, children calling your name, sometimes even giving you a hug. So this is what it feels like to be a celebrity…

And I don’t really mind the personal questions, but it’s a bit disruptive when you’re answer that  “yes, I have a boyfriend”, causes about 10 minutes of giggling from your class full of embarrassed teenagers.

Students Being In Awe

You’d think that the students would be used to Westerners, having been taught by them for years. But still, they are continually amazed by a Westerner’s appearance. If you walk past students who haven’t seen you before at a neighbouring school, their stares are as incredulous (and sometimes as scared) as if you had just arriveded from another planet. Seriously.

The most common feature which leaves the students awestruck? Height: if the male teachers are 6 foot or above, they are regarded with such amazement it’s as if they’re some kind of freakish giant.

I guess working with teenagers, you’re going to expect adolescent obsessions whatever country you’re in. But the love for K Pop really is unlike anything you’ve ever seen. All I need to do is say the word ‘EXO’ in class, and the screams are so loud you’d think that the Pop Band had actually appeared in my class. K Pop pencil cases, wallets, mirrors, photos, folders, makeshift tattoos… Korean schools are definitely in the midst of K Pop mania.

Exams Will Cause All Kinds Of Stress

Exams are a stressful time for anyone, but in Korea it’s a new extreme: students crying in the hallways, accosting their teachers to find out why they lost one mark in their test. And a day of total depression the day the results come out; every student you ask “How did you do”, you’re answered with a tearful “Not good.” Surely everyone can’t fail? Well, it sure seems like it here.

The worst I’ve seen was a student in our office for 2 hours, crying over one mark in her English test; she only finally left because it was time to go home. And no, she didn’t get the extra mark in the end either.

The Parents Are Very Involved

For this reason, I’m very glad I don’t speak Korean. Parents will text and call teachers, come into the school, and again it’s usually to argue over their child’s exam score or because they’ve been put in bottom set. One of our co-teachers was called until 11 pm by parents during exam time; she is a better person than me… I think I would have changed my number! Oh, and then there’s the parent who came into our office and cried over her daughter’s exam score for an hour… which really made it quite awkward for everyone in the room.

So when I was at school, anyone who dared to sleep in class would be thought of as a proper rebel. In Korea, it’s pretty weird if you get through a class without someone falling asleep (or trying to at any rate). I guess the reason for this is the long days they have studying, as I discussed in my Korean Education post.

Still, it would be nice if I didn’t have to spend half my time prodding students awake when it’s all become to much for them. And the individuals who decide to bring along a blanket and cushion to class to make themselves comfortable? That’s really just taking things too far!

The Students Have Power Over Teachers

It’s normal for teachers to write reports and evaluations for students. But in Korea, the students can get-their-own-back by writing reports on the teachers. That little terror who always disrupts class and I’m always telling off? Well, he’s going to give me a bad rating for sure!

If only I could have done the same when I was in school; some teachers would definitely have felt my wrath…

Boys and Girls Do Not Mix

I thought the ‘boys and girls hate each other’ phase was usually over when children become teenagers. Apparently not. A minority of boys and girls and friends, but the majority of students? No such luck. Sometimes if I ask a boy and girl to sit next to each other, or, even worse, work together, I’m greeted with looks of such surprise and worry you’d think I’d suggested they get married.

The one time in my class when the students found out that one boy fancied someone, there was such uproar that I couldn’t calm them down for fifteen minutes. True story. Which leads me on to my next point…

Ok, I’m not suggesting that students should be getting up to mischief in school by any means. What I’m talking about is how students can’t even talk about kissing, let alone see someone kissing on TV or in a movie. Before I knew this,I showed Taylor Swift’s ‘You Belong With Me’ music video in class. When Taylor kissed someone at the end… well, the reaction was the same as if I’d shown something on an X Rated Movie Channel.

I just hoped I hadn’t scarred them for life. I felt as guilty as a parent telling their child that Father Christmas isn’t real, making my students lose their innocence. Bad move me.

Students Want Your Food And Drink

Another type of inappropriate questions which the students ask: “Teacher, can I have some of your water?” “Ooh teacher, your lunch looks delicious, can I eat some?” Um… no… you cannot get your germs on my water bottle, and you cannot eat the lunch I prepared; get your own!

This is the last, and most important thing I’ve learnt while teaching in Korea. Food is the best reward you can give, and will earn you top teacher points among students.

If only I’d known this at the start. Food is the answer to everything: a bribe to make the children work, a reward for the hard-workers. All you need to do to get a student to profess their adoring love for you is to give them a piece of chocolate. Works every time. Well, you live and you learn…