Note: ‘Life in Korea’ posts are geared towards the newer expats amongst us. If you have a more experienced perspective, feel free to comment below.

Currency exchange note: As of the published date of this post, 1 Japanese yen was worth about 13 Korean won or 1.15 US cents. 1,000 Korean won will buy you 75 yen, while 1 US dollar will buy you 87 yen. See www.xe.com for up-to-the-minute currency rates.

Note: ‘Life in Korea’ posts are geared towards the newer expats amongst us. If you have a more experienced perspective, feel free to comment below.

Currency exchange note: As of the published date of this post, 1 Japanese yen was worth about 13 Korean won or 1.15 US cents. 1,000 Korean won will buy you 75 yen, while 1 US dollar will buy you 87 yen. See www.xe.com for up-to-the-minute currency rates.

Not too long ago I had to do a visa run – a seemingly silly yet non-trivial process involving two international flights to get a sticker put on a piece of paper. OK, so that sticker is a visa and that piece of paper is a passport, but still… My school got the paperwork started and setup a flight to Osaka, Japan – one of a few common destinations for visa runs.

Simply stated, a visa run is the process of acquiring a new visa by flying to another country and going to the local Korean consulate before returning to Korea. The paperwork is mostly done by your employer, but you’re the one that has to travel and get the visa. As a whole it’s not overly difficult, but does require a little homework before you leave Korea.

Step 1: Put together a cheat sheet with your new school’s name, address, phone number, your passport number, your address and phone number, your visa number, and any previous visa information. Don’t forget a couple of photos! Sure, all this stuff is on your passport and a few other places, but it’s a lot easier to handle one piece of paper than five.
Step 2: Pack light. You’re only going for a couple days and one night – a backpack or messenger bag should hold everything you need. Honestly, you can wear the same pair of jeans two days in a row. Also, exchange your Korean won for Japanese yen BEFORE you leave for Japan. There’s some money exchange places at the Japanese airport, but the rate won’t be as good.
Step 3: get to the airport and fly to Osaka. Simple enough. Pick up some maps and tourist information around the airport if you like.
After clearing Customs and Immigration in Japan (you’re traveling as a tourist during your visa run), exit the airport and enter the train station connected to the airport. Elsewhere on the map it’s referred to as the Kansai Airport Station. Two major private train companies service this station, and from here one can go almost anywhere across the train system spanning over a dozen prefectures and several of Japan’s islands. 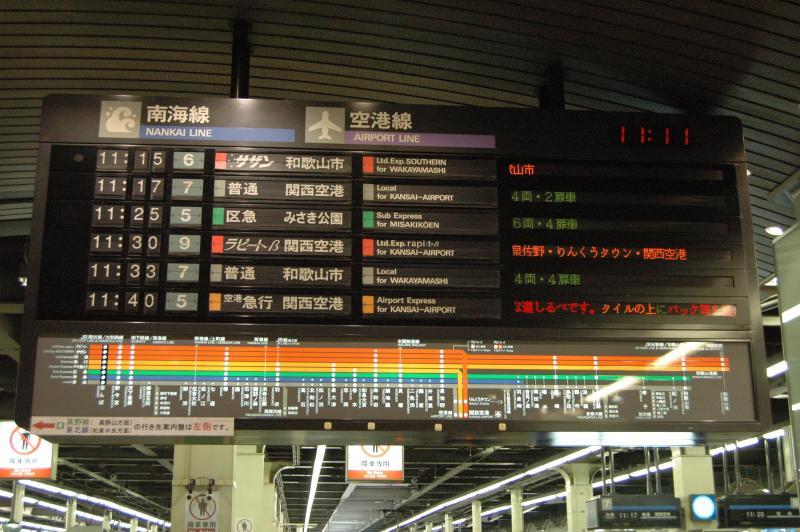 And what a train system it is. With a color scheme straight out of the 1980’s, there’s no less than eight ways to travel this portion of the Nankai Main Line. From the super express trains in red to the local trains that stop at every station in grey, there’s plenty of options to go around. 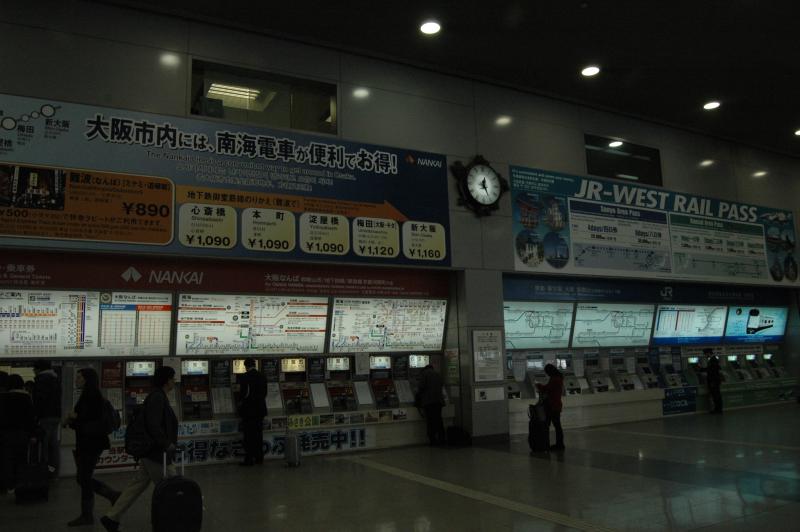 Nankai on the left and JR on the right – both services work pretty well alongside the Osaka city subway system.
Step 4: Take the Rapid Service Express train for Namba Station – once arriving you’ll be within walking distance of the Korean consulate. It’ll take about 45 minutes and cost 890 yen (about 11,500 Korean won). Do NOT take the Airport Limited Express – the “rapi:t” train – it will cost 500 yen more and only save about 11 minutes. Enjoy the view of Japan while riding the train.
As a bonus for traveling to Namba Station, you’ll be in one downtown part of Osaka – a great place to walk around after your obligations are tended to. See this other post on more about the Namba Station area.
Step 5: Namba Station will be the terminal station of the train you’re on, but there’s several different train stations on the map – each with its own set of exits. Follow the signs to the ‘North Exit’ or ‘Mido-suji’ – a nearby road. Once making it to the street, turn left, then cross the crosswalk on the right 30 meters away. Cross the street when you see the Subway (the restaurant) to be on the same side as it. Pass the McDonalds, cross over a stream, and you’ll see the consulate about 100 meters later.
The Korean consulate is hard to miss – it’ll be the only place with guards standing out front preventing people from taking pictures. That’s why I don’t have a picture of the place. Climb the stairs and fill out a visa application. Even if you have already have a visa number, you’ll have to fill out the form. Present form with passport and pictures. If your pictures won’t work, walk up to the second floor and get some new ones at the photo booth for 500 yen (about 6,500 won). Your standard multiple-entry E-2 visa should cost 5,400 yen (about 70,000 won) – head over to the visa vending machine and get the ticket-sized revenue stamp.
Step 6: Fill out a visa application, then give everything (the application, your picture(s), the revenue stamp and passport) to the consulate officer. Presuming there’s no problems, you should get a piece of paper telling you to return tomorrow.
Until then, you should have the afternoon and evening free to yourself. Plenty of hotels will offer to house you, but most are going to cost 5,000 yen (65,000 won) or up. You may have heard of capsule hotels, which are little more than bunks on a submarine. Another option to consider is two subway stops from Namba Station.

Step 7: Walk back the way you came. Right by the Subway restaurant is an exit / entrance to the Mido-suji subway line (the red-colored line). Get a 200-yen ticket, then ride two stops to the Dobutsuen-mae station. If coming from elsewhere in the city, the Sakaisuji line also stops here. Either way, take exit 3 to street level – along this side of the road will be a few cheap motels from 1,500 to 2,000 yen (19,500 – 26,000 won). 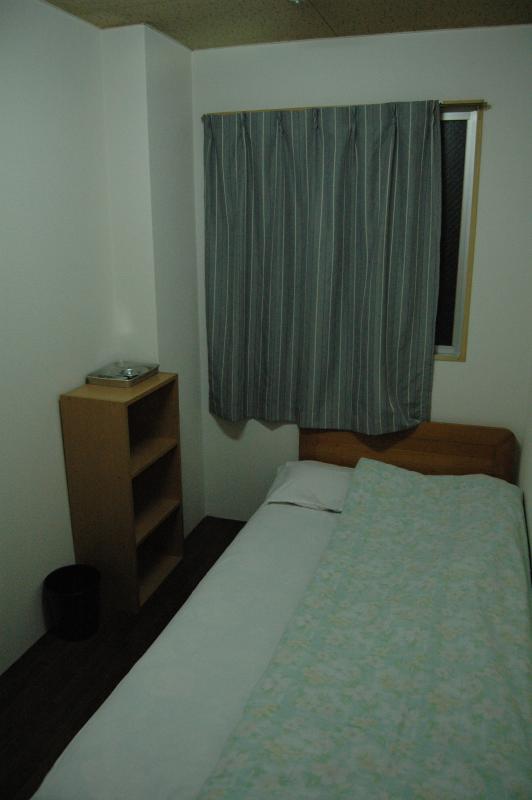 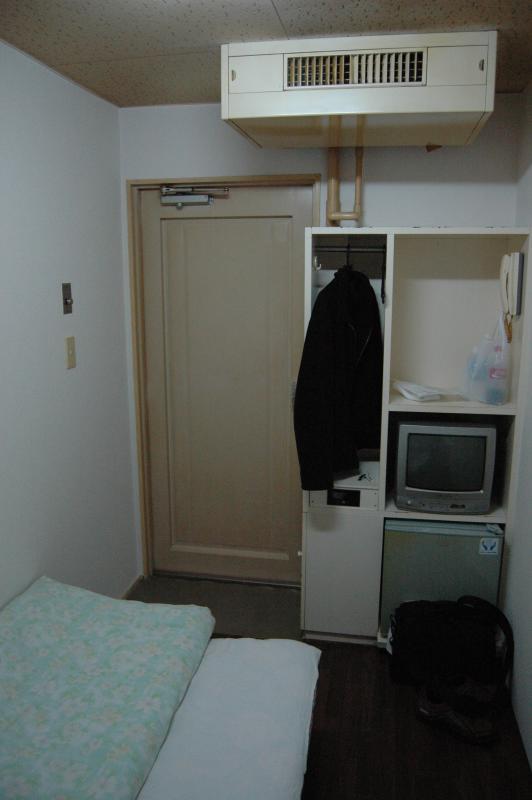 My hotel room that cost a grand total of 2,000 yen (about 26,000 won). So there’s a shared bathroom and kitchen with the rest of the floor – so what? Get out, explore, see some different parts of the city, then come back and crash for the night. 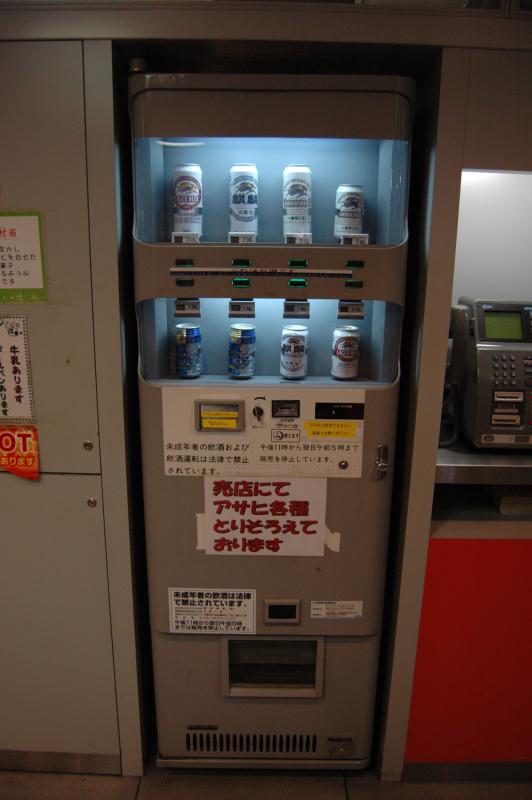 Keep your eyes peeled for the beer vending machines.

Step 7: return to the Korean consulate the next day with paper in hand. Ensure your passport has the new visa inside, then thank them and be on your way. Return the way you came – from Nankai Namba Station to Kansai Airport.
With the new visa secured, getting back into Korea should be a breeze. There – you’re legal for another year.

How much money should I bring? I brought about 300,000 won, which gave me about 23,000 yen and change. I ate out for dinner, breakfast, lunch, and snacks, drank a few beers, visited a couple temples, bought a few souvenirs, slept in an inexpensive hotel, paid for my visa (my biggest expense) and came home with about 7,000 yen in pocket (91,000 won). Japan is expensive – no doubt about it. As a rough estimate, expect things to cost about 30% more than the same type of thing might in Korea. If you want to eat out more lavishly or purchase some Japanese stuff, bring more with you – and keep it in cash. Not only is it accepted everywhere, but that way you’re not hit with currency exchange fees every time you swipe your card.

Will my Korean cell phone work while in Japan? No. In fact, your Korean cell phone may not know how to work outside of Korea – mine reset itself to January 1st, 1980 after turning it on in Japan. Use it for an alarm clock if you like – if you have to call someone, ask to borrow someone’s cell phone or at the Korean consulate.

Is English in Japan as commonly heard / seen as it is in Korea? It depends on the area, just like in Korea. Asking for directions can be accomplished if you know pidgin Japanese or they English. People can point to a price or write it down just as easily in Japan as in Korea. Navigating the subway is about as easy as in Seoul – the government-run subways have English audio announcements, and virtually all subways / train stations have English signs. You probably won’t hear many Japanese people speaking English unless they’re speaking to a foreigner, but it’s essentially the same way in Korea.

Is there much of a culture shock? Surprisingly, no. If you’re at the point where you’re doing a visa run, you’ve had some time to get used to Korea’s quirks. Whether walking down the street, riding the subway, or sitting in a communal bath, it’s not that different from life in Korea. Granted, you’re only there for a little over 24 hours – there’s not really a lot of time to be shocked. If you’ve survived a Korean jimjilbang, you’ll be fine in a Japanese bathroom.