I should preface this post by saying that Groove Magazine, in general, is an excellent resource for expats in Korea. Between generally insightful articles and good travel ideas, I tend to look for it whenever I’m around Hongdae or Itaewon (two expat-dense areas where a paper copy of the magazine can be picked up; it can also be read online at http://groovekorea.com/).

Page 74 has a rather troubling article – entitled “Blackout: the Drinking Culture in Seoul” by Jenna Myers. A few excerpts (pick up the paper copy of October’s Groove or logon to the website to see the full article):

I should preface this post by saying that Groove Magazine, in general, is an excellent resource for expats in Korea. Between generally insightful articles and good travel ideas, I tend to look for it whenever I’m around Hongdae or Itaewon (two expat-dense areas where a paper copy of the magazine can be picked up; it can also be read online at http://groovekorea.com/).

Page 74 has a rather troubling article – entitled “Blackout: the Drinking Culture in Seoul” by Jenna Myers. A few excerpts (pick up the paper copy of October’s Groove or logon to the website to see the full article):

Seoul is the capital and largest city in South Korea and where I resided for four years. Since that time, I have come to perceive this peninsula not as “The Land of the Morning Calm,” but rather “The Land of the Morning Hangover.” I’m sure most of the expat population pretending to be proper English teachers and businesspeople couldn’t agree with me more; especially after a Ladies Night where free drinks are limitless, endless and bottomless…

Most foreigners are said to refer to their existence in Seoul as “university extended,” perhaps because the party and all night drinking fests haven’t ceased. Only in this Asian chapter of the party guidebook of life, you make loads of cash and get to spend it unwisely. Yes, you still have to drag your ass to class, except this time you’re the one standing in front of your room blinking dimly at miniature versions of those pesky moms that won’t stop complaining about their child’s English education.

OK, I’m sorry. If your entire purpose for coming to Korea is to drink alcohol, party hard, and oh yeah!, half-heartedly show up to work with a hangover the next morning, get out of Korea. Just go. You give the rest of us a bad name, and Koreans a bad image of foreigners. It’s bad enough to have Kang-Shin-Who ignoring facts and numbers to promote racism; having foreigners actually prove the stereotypical view of foreigners doesn’t help anything either.

Of course this diatribe on the drinking culture in Seoul doesn’t mean that all foreigners are borderline alcoholics. We all make our own choices. Some of us
choose to spend our nights getting wasted… It is true that I blacked out most of my first two years in Seoul. I had fun…I think. I also met fantastic people and experienced a relatively carefree life. If you ever get the chance to live in Seoul, or you happen to live there now, it’s up to you to drink it all up, or just taste it. Whatever you decide to do…Gumbae!

Once again, I’m sorry. Traveling to a foreign country, getting a job, and living there requires better reasons than a ‘carefree life’ and partying until 3am. Who knows how much fun you had if you can’t remember it the next day? Asknow.ca – from some sources an excellent recruiter – doesn’t exactly help by using this as their Facebook picture (as well as in print advertising). 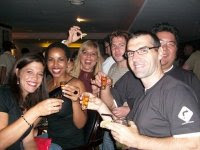 I don’t approach this subject from a teetotaler’s position; I make my way to Hongdae every now and then just like most expats living in Seoul. There is a difference between a few drinks on the weekends and blacking out or having a hangover while trying to teach ‘miniature versions of those pesky moms’. There’s something to be said about being part of a community – especially while living in a foreign country where few speak English and even fewer do it well.

What community, you might ask? I’ve yet to find any one large group of foreigners, since we have such disperate interests. The list of smaller communities, however, goes on longer than that hangover will – you just have to look for it. Roboseyo’s 2S2 is getting off the ground; I’m currently rehearsing with a choir to perform the Messiah in mid-December; the KOTESOL conference was last weekend, and that’s a huge community right there. There’s sporting groups, artsy / crafty groups, and at least a couple writing groups across the country. If you’re stuck or lazy, Seoul’s craigslist has some announcements under the ‘Community’ section, while Matt Lamers keeps up the good work at the Korea Herald with the most complete community group list I’ve seen to date.

To the editor of Groove Magazine (Tracey Stark), I have this to say:

In the future, consider how your articles / columns impact the image of foreigners in Korea. While I’m sure Ms. Myers meant to write about an interesting facet of life in Korea, I’m convinced it hurts the general Korean perception of us. Any person seeking to convince others of this negative stereotype can easily that article as ‘proof’ those stereotypes are correct. Those stereotypes undermine the efforts of teachers who take their job seriously, and who see a life in Korea as more than a year trying to get drunk or dance with locals. That Koreans read the Groove as well as foreigners (whether to know what’s happening or to practice their English) make it very important to put forth an image that doesn’t support the stereotype.

Anything else you’d like to add? Check out the full article for yourself, then let the editor know your thoughts at [email protected]. Comments are open – play nice.