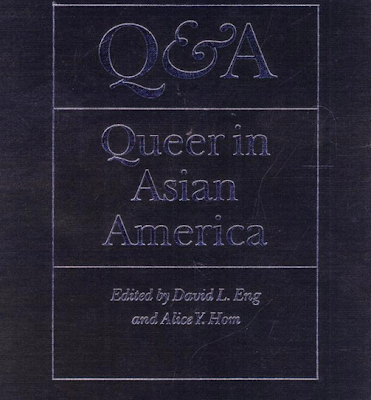 Googling ‘queer Korea’ brings up a lot of interesting things, including some nice academic readings. Queer in Asian America’s Toward a Queer Korean American Diasporic History by JeeYeun Lee is an interesting look that not only gives a quick historical analysis of the creation of the Korean American diaspora, but also looks at queer readings of diasporas narratives. She is writing from a very constructivist viewpoint, which can get a bit heady; lots of her time is spent deconstructing how the West has imperialistically created an idea of what it means to be queer (and its belief that the rest of the world is lagging behind its progressive views). Although this is important, at times I felt like I was reading in circles. There were a couple of (long) quotes that did stick out that I’d like to share if you don’t feel like reading the entire article.

‘(E)fforts to imagine or recuperate queer presences in diasporic histories have several effects. One is the critique of exclusive ideas about cultural authenticity. Many diasporic communities and communities of people of color in the West explicitly code same-sex desire as a white Western phenomenon, accusing queer people in their midst as selling out, assimilating, or lacking authenticity. Although speaking specifically of South Asian communities, Nayan Shah’s observation can apply to others: “The notion of culture here is like a fossil – solid and petrified… Any unfavorable value is displaced onto a non-South Asian source. Ironically, these heterosexists unquestioningly accept the historically ‘Western’ notion that heterosexuality is natural, normal, and biologically correct and that homosexuality is unnatural and perverse” (see Chapter 9). Gloria Anzaldua recodes and accusation usually thrown at queers – that we are betraying our people by accepting white Western behavior – and throws it back at mainstream communities of people of color as their betrayal of us: “Not me sold out my people but they me. So yes, though ‘home’ permeates every sinew and cartilage in my body, I too am afraid of going home” (21).… By demonstrating an indigenous history of same-sex desire, queers who are diasporic or people of color defy exclusive heterosexist conceptualizations of culture and authenticity.’ (193)

‘”Blood,” “kinship,” “lineage”: these are all terms that invoke biological reporudction and that form the foundation of most notions of diaspora. Diasporic histories with a queer presence can critique this overwhelming heterosexism and the naturalized equation of kin with diasporic community. They also reword the ground of cultural authenticity and nationalism, uncovering their highly constructed nature and the effort it takes to maintain them as pure and heterosexual. Queerly diasporic narratives of homelands rupture how community is naturalized as hetorsexual reproduction, highlighting istead the ways in which cultural authentictiy, nation, and diaspora are all actively imagined and maintained in interlocking constructions.’ (195)

Although the text is not the easiest read and can be frustrating because of its academic combination of complexity and brevity, it gives a good briefing of Korea’s diaspora, a look into the creation of queer readings of diasporas’ narratives, as well as a warning to not overgeneralize queer histories: “Arguing for an indigenous queer past has the danger of creating an essential “homosexual” identity, unchanged throughout history, which may seem liberating in the short term but only boxes us in further.” (198) However, the article only provides a framework for the queer Korean American narrative and leaves us with more questions.

‘I have a hard time imagining what a satisfyingly rich complex queer Korean American diasporic history would look like: one that did not simply recuperate “gays” and “lesbians” in history, one that cloesly examine nuances of sexuality over time and investigated the defining impact of sexuality in all aspects of society, one that integrated the impact of migration – one that acknowledged the investments of current day Korean American queers across time and space.’ (204)

As this article was written in 1998, I imagine there is more to be found by JeeYeun Lee. I’ll look for some more of her writings, but I need a break from all this reading. Can’t believe I used to read stuff like this all the time in university… I am out of practice!
The best part of this find? The entire article is available online. Enjoy!