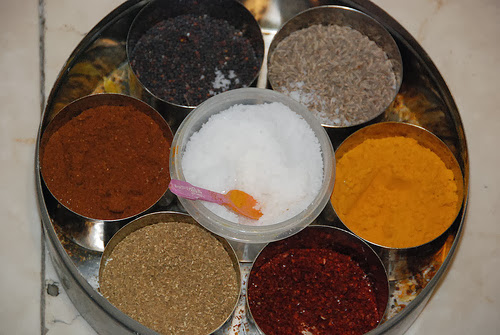 Seoul International Women’s Association’s (SIWA) International Culinary Experience (ICE) is a culinary program that seeks to share food culture, culinary skills and traditional recipes.   Each month a SIWA member hosts a cooking experience, in their home, and teaches participants what food means to their culture and how that connects to the person’s identity through cooking dishes from their home country.   The monthly instructor provides a cooking demonstration and participants sit down and share the meal together.  The host also shares information about her home country and experiences with food. 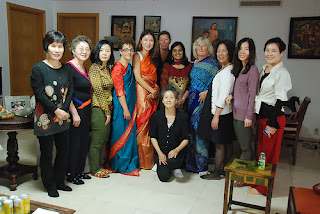 On Oct 11 (Friday), Shubha Maudgal opened her home to teach SIWA members how to cook a traditional Indian meal.
Shubha arrived in Seoul in May of 2012, with her husband, who accepted a three year work assignment.   She holds a PHD in Polymer Chemistry from the Indian Institute of Technology, Mumbai.  Prior to coming to Seoul, she worked for an NGO, Cancer Patients Aid Association.  Currently she volunteers at the Seoul National University Hospital Breast cancer Department doing research on pysco-social issues related to breast cancer. 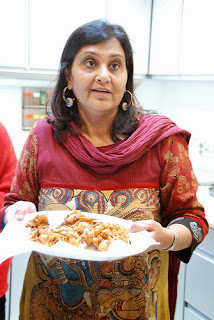 In her free time, Shubha enjoys reading books.  She is a leader of SIWA’s book club and participates in several others.  Another of her hobbies is traveling.  Moving to Seoul gave her the opportunity to travel through much of Asia including China, Malaysia, and Vietnam.
Indian food varies by region and focuses on locally available fruits, vegetables, spices and herbs.   It is largely shaped by Dharmic beliefs and for this reason many dishes are vegetarian.  In Northern India, where many of the dishes prepared during the demonstration originated, the cuisine has been influenced by Central Asian cultures.
Shubha’s meal consisted of four traditional dishes; Chhola, a chickpea curry, Allo Sabji, a potato dish, Kadhaii Paneer, a dish with tomatoes and crème, and Boondi Raita, a yogurt and fried chickpea dish.   Shubha’s great knowledge of Indian cooking and skills in the kitchen impressed everyone who attended.
Shubha’s first dish, Chhola, is a typical northern Indian cuisine.  Recipes for Chhola vary from household to household, within the region, as the recipe is usually passed from generation to generation.
Dried chickpeas are most commonly used for Chhola.  They must be soaked overnight.  Once the chickpeas have absorbed enough water, they are placed in a pressure cooker with ginger and salt then partially mashed.  Once mashed, spices including caradamoms, cinnamon clove and bay leaves are added and heated in a pan.  When heated, a thick gravy forms. 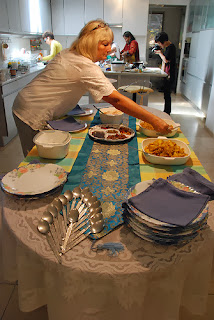 The second dish that was prepared was Alloo Sagjii.  Alloo Sabji is a potato dish, which also comes from Northern India.  It is a simple and wholesome dish of fried potatoes and spices.  Following the Alloo Sagjii came Kadhaii Paneer.   This savory dish is a combination of paneer and colorful peppers with a sautéed spicy gravy. 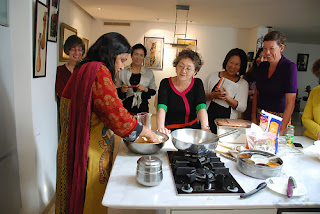 The final dish prepared for the class was Boondi Raita.  Boondi is traditionally a Rajastani snack food.  It is made from fried chickpeas that have been sweetened.  The Raita is a yogurt that is poured over the Boondi.
Throughout the cooking demonstration the aroma of Indian spices filled Shubha’s home.  Her lovely personality and kitchen skills made for an enjoyable experience for all participants.  Shubha chose dishes that have ingredients that can be found in Seoul without much difficulty.   After the class was over everyone sat down and enjoyed a satisfying meal of Indian cuisine.
Click here to learn more about participating in SIWA’s ICE program