This is following on from last weeks post about the stress created by the relationship between the young and old in Korea and particularly regarding families.  I argued strongly that the pressure of providing for people in old age was just too much for the younger generation in Korea.

By chance, I stumbled across an episode of Newsnight (BBC) on youtube shortly after posting last weeks blog http://www.youtube.com/watch?v=2BjbWdwDB7s.  The subject was about the problems we face as a planet with the growing population of people over 60 in the world.  Here are some of the statistics summarised from the programme, sourced from the UN:

This is following on from last weeks post about the stress created by the relationship between the young and old in Korea and particularly regarding families.  I argued strongly that the pressure of providing for people in old age was just too much for the younger generation in Korea.

By chance, I stumbled across an episode of Newsnight (BBC) on youtube shortly after posting last weeks blog http://www.youtube.com/watch?v=2BjbWdwDB7s.  The subject was about the problems we face as a planet with the growing population of people over 60 in the world.  Here are some of the statistics summarised from the programme, sourced from the UN: 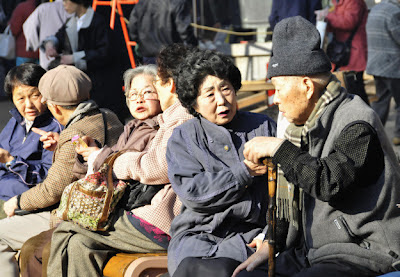 – The over 60s are the fastest growing age group in the world.

The UN predicts that the problem of an aging population on the economy is not just an issue for the rich nations but also in the developing world, where it is the duty of the young to take care of their family in old age.  Because of this governments and indeed older people themselves are not making provisions for later life and could suffer as a result.

In Korea’s case, it is not a developing country anymore, but it still has very much a developing world way of dealing with people in their old age.  As I mentioned in my previous article, there is a debt that young people owe to their parents and this is to look after them, both by caring for them personally and by financially supporting them when they are older.  This being almost the sole way of taking care of elderly people cannot continue for very much longer, especially as South Korea has one of the lowest birth rates in the world.

It is not that young people caring for their parents in later life is a bad thing, we all should be giving our parents a measure of care and attention and maybe aiding them financially too, but it cannot be too demanding and other measures must be put into place.

Government pensions are one solution.  In Korea, there is a pension scheme but unlike my country there seems to be no state pension, whereby even if someone pays no money into a pension scheme, they will at least get some return from the government because of paying taxes throughout their lives.  The results of this can be seen in Korea when you see the sad sight of very old people carting huge amounts of cardboard around city streets.  The problem with state pensions, however – as is experienced in the UK – is that they are quite a tax burden for the country.  For this reason my own country’s government has been controversially reducing the amount paid out for pensions steadily over recent years. 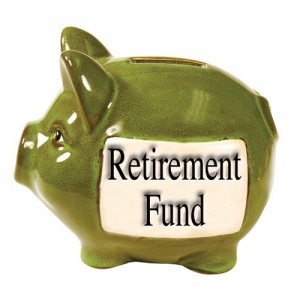 By far the best solution (and the most ethical) in an aging world, is for people to take responsibility for their increasing longevity and pay for themselves.  This is the idea behind personal pensions and is undoubtedly the only real way forward.

So with personal pension schemes in place in Korea, why are the old still so reliant on the young to provide for them when they are older, even in families that have had good jobs and healthy incomes?  Well, it all comes down to keeping the standard of living that they have had for their whole lives or even improving on it.  I think the older population of Korea really expect that for all the hard work they have put in to bringing up their children they should reap a dividend of an easy and comfortable life in their old age, wanting for little.  This is further exacerbated by the feeling of superiority many older people have towards people who are younger.  They are old, they deserve better than the young.  It sounds a little reductionist and over-simplified, but live in Korea for long enough and this is a conclusion that you cannot help but make.

South Korea also has a brand name obsession and this is not exclusive to the young, older people still want the prettiest and shiniest new brands so they can show off their high status to their friends.  Do not underestimate the importance of this factor in Korea.  In my experience, shows of status often dominate many conversations between friends and acquaintances of my parents in-law and in many other situations.  There seems almost a constant battle between people – even those that have been friends for decades – of one-upmanship in this regard, revealing petty jealousies that are so transparent it defies belief at times.

This is the annoying arrogance of entitlement that older people sometimes have in this part of the world.  They feel they are entitled to respect, to money, to be obeyed, to give advice (that should be followed) and entitled to the life of Riley just because they are old.  It has irked me since day one living in Korea, this ‘arrogance of age and position.’  The other unpleasant aspect of it all is that Koreans do not even have to be that old to exhibit this attitude, as merely a higher position at work, a year older, or simply being a man can create the same condition.

This even cropped up in a book I was reading recently on the Korean war.  It was a sore point and a regular complaint of the Americans and their allies that the Korean soldiers of high rank would rarely listen to anyone, both the South Koreans under their command or their foreign allies.  Allied commanders remarked that they would walk around with an air of superiority, giving orders but not doing any work of their own accord.  Their age and rank gave them a perceived right to be respected without ever really earning it and although Korean soldiers earned a good reputation for themselves in the following Vietnam war, the same could not be said of the Korean war with allied forces having little confidence in them.

Korea has undoubtedly made some of the greatest strides forward of any country in recent history, which they deserve immense credit for.  Many still seem to be stuck in pre-Korean War way of thinking, however, and this needs to change to adapt to the modern world.  Maybe things will change with a more open-minded younger generation, but I don’t know that I would like to make a bet on a smooth and quick change of attitudes in the culture of age and respect.

The respect culture in this part of the world combined with the importance of social status combine to create a feeling of, ‘well I suffered when I was younger, now it is my turn for some payback and some boot-licking from anyone I can get to do it.’  From my experience of twenty and thirty-something Korean people, they often display short memories of how they suffered when they were new to jobs, and when they were teenagers and lose empathy for those under them, both in age and in positions in work rather too swiftly.  Will they carry this into old age and keep piling evermore pressure on the young in the future?  Only time will tell.