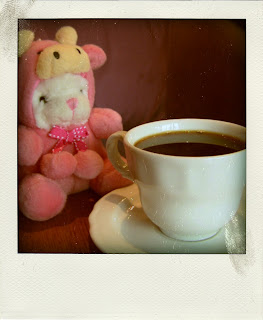 Jo and I had so much fun making the above video. Here’s the back story: September 25th, we held the first YouTube gathering in Korea. While on the way to meet Hyunwoo Sun at his office in Jong-no, Jo and I stumbled across a little coffee shop called God in a Cup. I thought it was a great name for a shop, since I frequently call coffee the nectar of the gods (I even got one of my classes to learn that phrase).

But I really didn’t know what kind of video to make. Since moving into my own classroom, I’ve taken to drinking a bit more coffee. Sometimes I’ll make a pot in my French Press (that TheChoos sent me), while other times, I’ll make some instant coffee.

Since I really don’t like the instant variety (it’s mainly sugar and creamer), I thought it would be a good way to introduce the most common way coffee is consumed in Korea and this new little shop.

There were a few different ideas tossed around when creating the video, before settling on the above format, and I like the end result.

For those that want to know about God in a Cup, it’s located at Jong-no 5-ga, exit #1. It was a variety of coffees available for your choosing, all of them hand dripped. This means that a 6oz. cup of coffee will run you W5,000 or more. The beans aren’t that exciting and look more like they were purchased from Starbucks or The Coffee Bean. However, it does have a great atmosphere and was fun to film in the area.