The 40th Busan International Kite Festival was held this weekend, so yesterday we went along to watch and fly kites of our own around the periphery of the event, which apparently is the done thing. This involved actually buying a kite first, but given that kite flying is a reasonably popular activity in Busan, it isn’t that difficult to find shops selling them in appropriate locations.

The 40th Busan International Kite Festival was held this weekend, so yesterday we went along to watch and fly kites of our own around the periphery of the event, which apparently is the done thing. This involved actually buying a kite first, but given that kite flying is a reasonably popular activity in Busan, it isn’t that difficult to find shops selling them in appropriate locations.

The Festival was being held at Dadaepo Beach. During my first 18-month stay in Korea, and even though some of it was a bit of a blur, I’m fairly sure I only visited Dadaepo Beach once, and that was only in passing as a break between driving from one place to another. In the last three months, I’ve been back there for the Last Sunset Festival, the Jeongweol Daeboreum Festival and now the International Kite Festival. Suddenly, Dadaepo Beach seems to be a hive of festival activity. 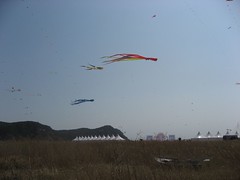 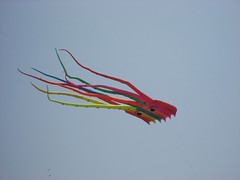 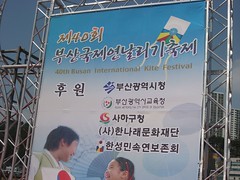 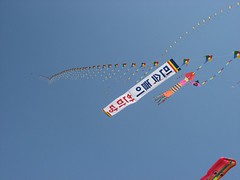 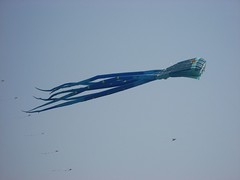 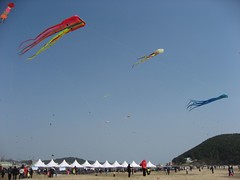 Like many things I experience in Korea, I had no few preconceived ideas as to what to expect, but having never seen one-hundred foot long kites before, I was in for a surprise when they swung into view over Dadaepo Bay. It looked exciting. There were festival tents and a large banner promised ‘Folk Games Big Party’. But in truth, not a lot seemed to be actually happening – or not in an organised way at least. Dadaepo Beach was full of people flying their kites in a private capacity. Most were small but there were obviously a few more hard-core individuals controlling larger – and noisier – aerial displays. It seems I also hadn’t realised that by fitting a kite with an audible device, the swooping and diving can be accompanied by a rather alarming noise. 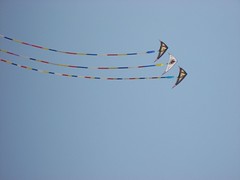 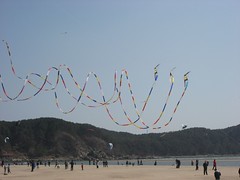 But while flying a kite may offer some interactivity, watching people keep their kites in the air wasn’t much of a spectator sport, so I wandered down the beach where I thought I’d spotted Korean Batman, who actually turned out to be a kitesurfer getting ready to take to the water. 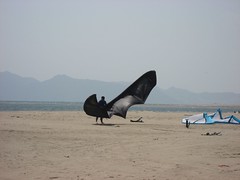 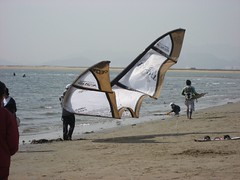 In fact, some kitesurfers were already in the water. It was unclear whether they had any connection with the Festival or merely happened to be doing what they always did on a Sunday afternoon. I rather suspected the latter. Dadaepo Beach seems to be one of those ‘anything goes’ type of places. 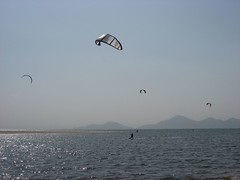 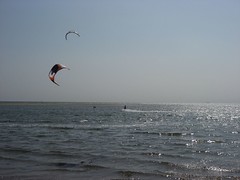 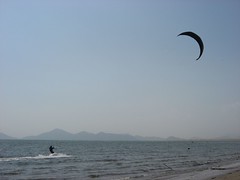 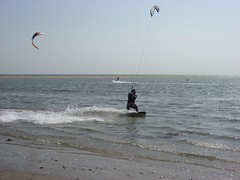 Back at the tents a few people were playing traditional Korean games, one of which involved throwing an arrow into a cylindrical tube. But generally, while there were a lot of tents, not much was happening in most of them. A few had kites on display, while many of the others were either empty or had been commandeered by people to sit down in. 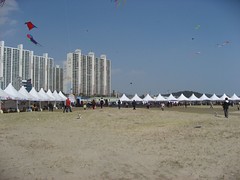 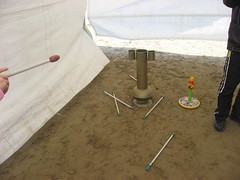 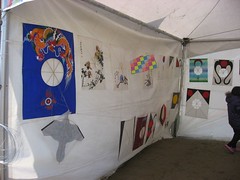 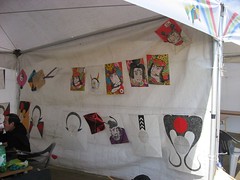 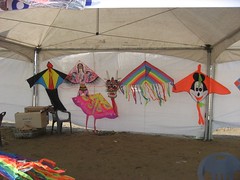 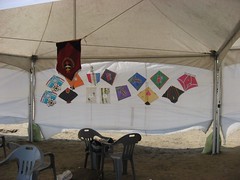 I understand that Saturday saw the elimination rounds of a kite competition and that Sunday would therefore see the finals. This might have explained the apparent lack of official activity. I can’t say what stage of the final it was that eventually did begin, but two men took to different podiums on the beach and readied their kites. If the judge venting his anger at both competitors was anything to go by, this was a very serious business. Apparently this was to be a ‘kite fight’. It wasn’t at all clear what this involved but as I watched both kites in the air positioning themselves it seemed to have all the excitement of a slow game of chess. The friends we’d come with wanted to go and eat what would be a very late lunch so we left at this point. I didn’t feel I was missing much, which is a pity because afterwards I learned that Kite Fighting is a proper sport in Korea and it certainly sounds like it gets more interesting than anything I saw. As we walked to our car, one of the men could be seen running to pick up his severed kite. 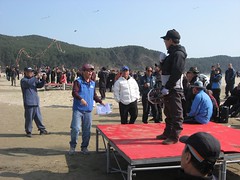 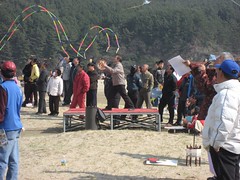