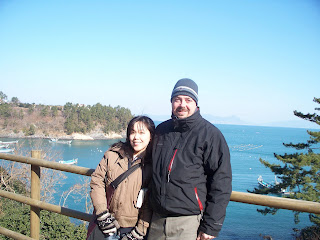 Yujin and I took a little trip over the break. We entertained our several options and decided at last to go to Yeosu again and revisit some of the places we had seen there in the days after our first meeting. It was our hope to finally visit Geomundo Island, but we were again foiled by the elements.

Yujin and I took a little trip over the break. We entertained our several options and decided at last to go to Yeosu again and revisit some of the places we had seen there in the days after our first meeting. It was our hope to finally visit Geomundo Island, but we were again foiled by the elements.

We left early afternoon and before we ever walked out the door I was exhausted. I had spent the morning at the bank, paying my bills and sending some money back to the states. For some reason it was a big banking day. When I pulled my number I was 124 and they were serving 91. And there is only one lady who does the wire transfers and she was busy but I informed her that I was waiting and the nice lobby guy (who mopped up the dogshit I had tracked in last time) got a queue going at her desk and it appeared that I was second. I began to contemplate the possibility of auctioning off my now quite valuable #124 but the language barrier and an atypical consideration of self-preservation prevented this.

I was given a paper cup of strong green tea by the nice lobby guy, who, knowing I was there to donate an organ to the fickle whims of the monetary system, went back and put the won/dollar exchange ticker on the big screen and started giving me a blow-by-blow commentary, in Korean and across the width of the bank, to the delight of the hundred or so nationals present whose currency was safely esconsed in shitty Won. As we watched the rate rose and fell and rose and fell and I thought to myself, how are they going to know what rate to pick? I have to sign something and they have to wire something and take something out of my account and put it in the other one and meanwhile this thing is bouncing like Bozo’s balls in the Grand Prize Game (yeah, I’ll be forty next year). If I worked at the bank and someone was going to get screwed it would not be the bank. Of course, these questions, and many others I would like to ask now go unuttered and I have learned to sit quietly and let the wheels turn around me. It is quite liberating, really, to be helpless.

When my turn came I was delighted to find that the rate had bounced in my favor and I was able to send my penny home through the forfieture of far less Won than last month. When the currency lady was done having her way with my money the nice lobby guy took my fistful of utility bills and tore them into the appropriate shreds and inserted the shreds into the appropriate slot in the bill payer machine and took my bankbook and inserted it into it’s special slot and something beeped and a piece of paper I couldn’t read was spit out and I was right-o with the electric, internet, and cell phone company. I felt pretty damned responsible at that point, let me tell ya.

Home I went, drained physically and financially, and packed the trusty backpack. I took the camera, travel tripod, the spare batteries and charger, the MP3 and its USB charger, the phone, the extra phone battery and its charger, Volume II of the Complete Sherlock Holmes, Lonely Planet’s Korea, my sketchbook, journal, pen, pencils and sharpener and eraser, mini-maglight, identification, reading and sun glasses, and basic toilet. Along with the clothes on my back I took an extra pair of underwear for the five day trip but it turned out I didn’t need them. (I bought one pair of socks on the road.) There was plenty of room left for the outer water/wind layer of my Columbia two-piece.

We hit the road. Bus 87 to Yeonsandong Station, subway to Nampodong, express bus to Yeosu. We caught a local down to the Ferry Terminal, which was closed. We looked around and found moderately priced accomodation at the Midojang Yeogwan: quiet for a yeogwan and very clean, excepting the sheets. We then walked across the road to the shopping area and had the variety platter at the New York Hot Dog and Coffee. The hotdogs themselves were good all-beef weiners and the toppings were eclectic but tasty. There was a chili dog, a grilled onion dog, and a curry dog, but we liked the bulgogi dog the best. I wouldn’t pass up a chance to eat at this place if you are a homesick hotdog fan.

We woke early the next morning to try to catch the 7:40 ferry out to the island but the nice desk lady told us that the seas were too rough and the ferry might not run for a few days. This got me to thinking: what if we finally get out there and then the ferry is cancelled for a week or two. That would be a lovely phone call: “Hello, KidsClub? Uh, listen. I’m, like, stuck on this island…”

We decided to go back to the place where it all began. This was, afterall, exactly like our first date, and on our first date we got up early at the hotel and went to the ferry terminal and were told “no, the seas are too rough”, and we decided to go to the pretty little fishing town by the sea with the beautiful temple on a cliff high above. We got there and got the best room in my favorite hotel, the one with two huge windows overlooking the blue sea and a bathtub with powerful jet-like devices which stir up the water around you in the most pleasant and relaxing fashion. We were told that we were very fortunate to have come on the day we did, because the temple was hosting their annual New Year’s Eve festival the following evening and the hotel room we were staying in would have cost three times as much if it were available, which it wasn’t. At W50000 the place is an absolute steal anyway, but special event pricing would have placed it beyond our budget. If you want to know where this place is and the name of the hotel and the number of the best room, too bad.

We went down the hill to the little bar with a view and a fire crackling in the big cast iron stove and shucked oysters into our mouths and washed them down with some good cold Korean beer and then went to bed early so as to rise at 6am hike up the mountain to watch the sunrise at the temple. We got up at 6am and hiked up the mountain because the nice hotel guy told us that the sunrise was at 7am. Or that is what I thought he said. He actually said 7:20. And the sun really rose at 7:32 and cleared the haze on the horizon at 7:40, at which point I had been standing on a cliff in the wind over the ocean for 55 minutes, the last 15 of which I don’t remember because that part of my brain froze. But I was taking time-delayed still images of the sunrise, one picture per minute, and I counted them afterwards and that is how it works out. We staggered, moaning, down the mountain and got into the hot tub and thawed out. Then we had a three-hour nap and took the bus back to town.

The rest of the trip basically sucked. Here is the condensed version: Bus to Mokpo. Heat on high and children screaming and me steaming in long underwear. Step off bus into driving wet snow. Walk to four bus stops before we find the one downtown to the Lonely Planet’s almighty recommended mid-level hotel. Finally locate hotel. Hotel out-of-business. Find other less than optimal accomodations. Go to find food. Expensive dinner too horrible to describe. Make small scene at restaurant. Go back to Yeogwan. Alternately freeze without and burn with heating mattress. Get up. Go to museums. Lonely Planet’s almighty recommended restaurant nearby out-of-business. Nice museum guy says walk that way ten minutes: many restaurants. Walk that way three minutes: one restaurant. Walk three minutes: restaurant out-of-business. Eat ramen in museum snack bar. See butterflies and poorly stuffed tiger. And funny shaped rocks. And more funny shaped rocks. And Korean art from five generations of one family (Ok, this part didn’t suck). In museum bathroom have first signs of terrible illness. Go to next museum. See ships and boats and nets and etc. Start to feel rather poorly. Take taxi back to yeogwan and am violently ill for the next twenty-four hours. Yujin again saves my life with fluids and tender ministrations. Train home [took the KTX from Mokpo via Daejeon rather than the quicker bus (no bathroom) and the cheaper, direct, Mugunghwa train (but 9.5 hours. wha?)].

The train home was actually wonderful. I have written before about high speed rail. It is an incredible way to travel. It is an absolute travesty that the United States does not have it throughout. And when I finally got home I was able to eat for the first time since Wednesday and that felt good. I have some good pictures which I will post in the photo section. Thanks for reading and good night.